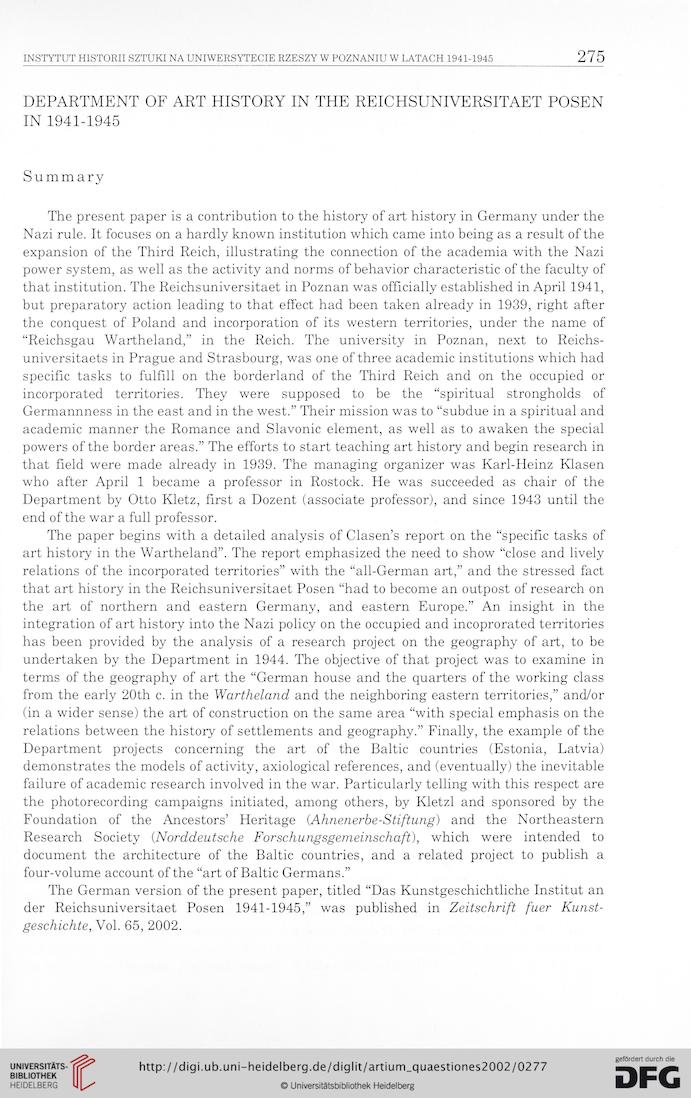 DEPARTMENT OF ART HISTORY IN THE REICHSUNIVERSITAET POSEN
IN 1941-1945

Su mm ary
The present paper is a contribution to the history of art history in Germany under the
Nazi rule. It focuses on a hardly known institution which came into being as a result of the
expansion of the Third Reich, illustrating the connection of the academia with the Nazi
power system, as well as the activity and norms of behavior characteristic of the faculty of
that institution. The Reichsuniversitaet in Poznan was officially established in April 1941,
but preparatory action leading to that effect had been taken already in 1939, right after
the conąuest of Poland and incorporation of its western territories, under the name of
“Reichsgau Wartheland,” in the Reich. The university in Poznan, next to Reichs-
universitaets in Prague and Strasbourg, was one of three academic institutions which had
specific tasks to fulfill on the borderland of the Third Reich and on the occupied or
incorporated territories. They were supposed to be the “spiritual strongholds of
Germannness in the east and in the west.” Their mission was to “subdue in a spiritual and
academic manner the Romance and Slavonic element, as well as to awaken the special
powers of the border areas.” The efforts to start teaching art history and begin research in
that field were madę already in 1939. The managing organizer was Karl-Heinz Klasen
who after April 1 became a professor in Rostock. He was succeeded as chair of the
Department by Otto Kletz, first a Dozent (associate professor), and sińce 1943 until the
end of the war a fuli professor.
The paper begins with a detailed analysis of Clasen’s report on the “specific tasks of
art history in the Wartheland”. The report emphasized the need to show “close and lively
relations of the incorporated territories” with the “all-German art,” and the stressed fact
that art history in the Reichsuniversitaet Posen “had to become an outpost of research on
the art of northern and eastern Germany, and eastern Europę.” An insight in the
integration of art history into the Nazi policy on the occupied and incoprorated territories
has been provided by the analysis of a research project on the geography of art, to be
undertaken by the Department in 1944. The objective of that project was to examine in
terms of the geography of art the “German house and the ąuarters of the working class
from the early 20th c. in the Wartheland, and the neighboring eastern territories,” and/or
(in a wider sense) the art of construction on the same area “with special emphasis on the
relations between the history of settlements and geography.” Finally, the example of the
Department projects conceming the art of the Baltic countries (Estonia, Latvia)
demonstrates the models of activity, axiological references, and (eventually) the inevitable
failure of academic research involved in the war. Particularly telling with this respect are
the photorecording campaigns initiated, among others, by Kletzl and sponsored by the
Foundation of the Ancestors’ Heritage (Ahnenerbe-Stiftung) and the Northeastern
Research Society (Norddeutsche Forschungsgemeinschaft), which were intended to
document the architecture of the Baltic countries, and a related project to publish a
four-volume account of the “art of Baltic Germans.”
The German version of the present paper, titled “Das Kunstgeschichtliche Institut an
der Reichsuniversitaet Posen 1941-1945,” was published in Zeitschrift fuer Kunst-
geschichte, Vol. 65, 2002.