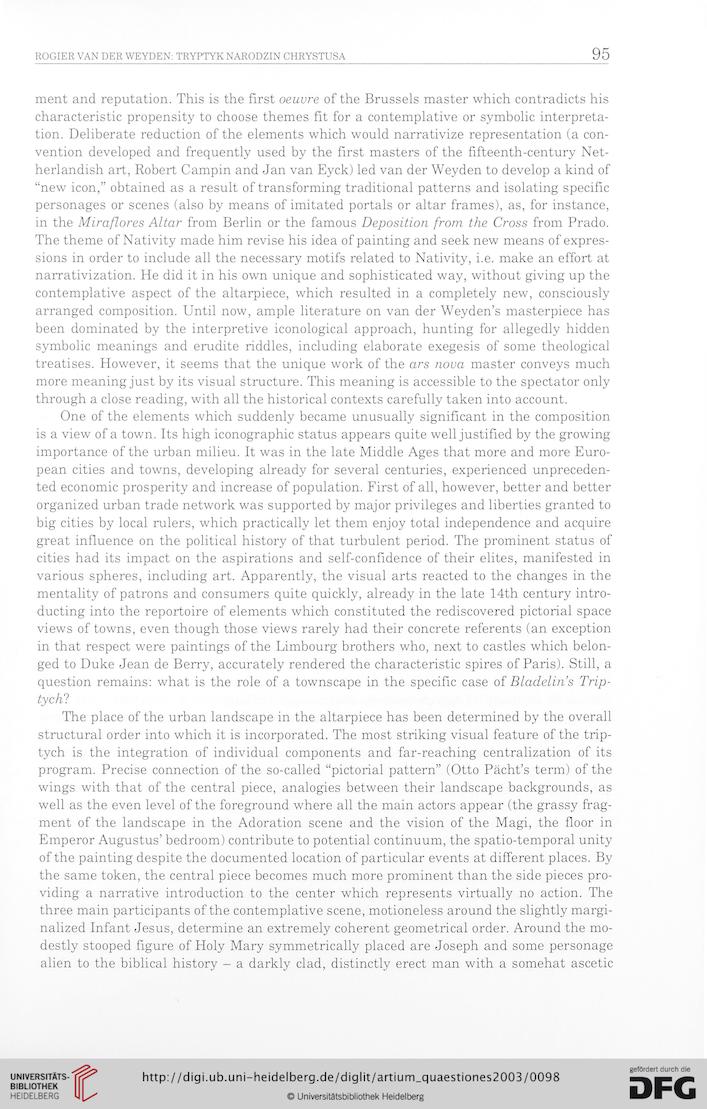 ment and reputation. This is the first oeuure of the Brussels master which contradicts his
characteristic propensity to choose themes fit for a contemplative or symbolic interpreta-
tion. Deliberate reduction of the elements which would narrativize representation (a con-
vention developed and freąuently used by the first masters of the fifteenth-century Net-
herlandish art, Robert Campin and Jan van Eyck) led van der Weyden to develop a kind of
“new icon,” obtained as a result of transforming traditional patterns and isolating specific
personages or scenes (also by means of imitated portals or altar frames), as, for instance,
in the Miraflores Altar from Berlin or the famous Deposition from the Cross from Prado.
The theme of Nativity madę him revise his idea of painting and seek new means of expres-
sions in order to incłude all the necessary motifs related to Nativity, i.e. make an effort at
narrativization. He did it in his own uniąue and sophisticated way, without giving up the
contemplative aspect of the altarpiece, which resulted in a completely new, consciously
arranged composition. Until now, ample literaturę on van der Weyden’s masterpiece has
been dominated by the interpretive iconological approach, hunting for allegedly hidden
symbolic meanings and erudite riddles, including elaborate exegesis of some theological
treatises. However, it seems that the uniąue work of the ars noua master conveys much
morę meaning just by its visual structure. This meaning is accessible to the spectator only
through a close reading, with all the historical contexts carefully taken into account.
One of the elements which suddenly became unusually significant in the composition
is a view of a town. Its high iconographic status appears ąuite well justified by the growing
importance of the urban milieu. It was in the late Middle Ages that morę and morę Euro-
pean cities and towns, developing already for several centuries, experienced unpreceden-
ted economic prosperity and increase of population. First of all, however, better and better
organized urban trade network was supported by major privileges and liberties granted to
big cities by local rulers, which practically let them enjoy total independence and acąuire
great influence on the political history of that turbulent period. The prominent status of
cities had its impact on the aspirations and self-confidence of their elites, manifested in
various spheres, including art. Apparently, the visual arts reacted to the changes in the
mentality of patrons and consumers ąuite ąuickly, already in the late 14th century intro-
ducting into the reportoire of elements which constituted the rediscovered pictorial space
views of towns, even though those views rarely had their concrete referents (an exception
in that respect were paintings of the Limbourg brothers who, next to castles which belon-
ged to Duke Jean de Berry, accurately rendered the characteristic spires of Paris). Still, a
ąuestion remains: what is the role of a townscape in the specific case of Bladelin’s Trip-
tychP.
The place of the urban landscape in the altarpiece has been determined by the overall
structural order into which it is incorporated. The most striking visual feature of the trip-
tych is the integration of individual components and far-reaching centralization of its
program. Precise connection of the so-called “pictorial pattern” (Otto Pacht’s term) of the
wings with that of the central piece, analogies between their landscape backgrounds, as
well as the even level of the foreground where all the main actors appear (the grassy frag-
ment of the landscape in the Adoration scene and the vision of the Magi, the floor in
Emperor Augustus’ bedroom) contribute to potential continuum, the spatio-temporal unity
of the painting despite the documented location of particular events at different places. By
the same token, the central piece becomes much morę prominent than the side pieces pro-
viding a narrative introduction to the center which represents virtually no action. The
three main participants of the contemplative scene, motioneless around the slightly margi-
nalized Infant Jesus, determine an extremely coherent geometrical order. Around the mo-
destly stooped figurę of Holy Mary symmetrically placed are Joseph and some personage
alien to the biblical history - a darkly clad, distinctly erect man with a somehat ascetic