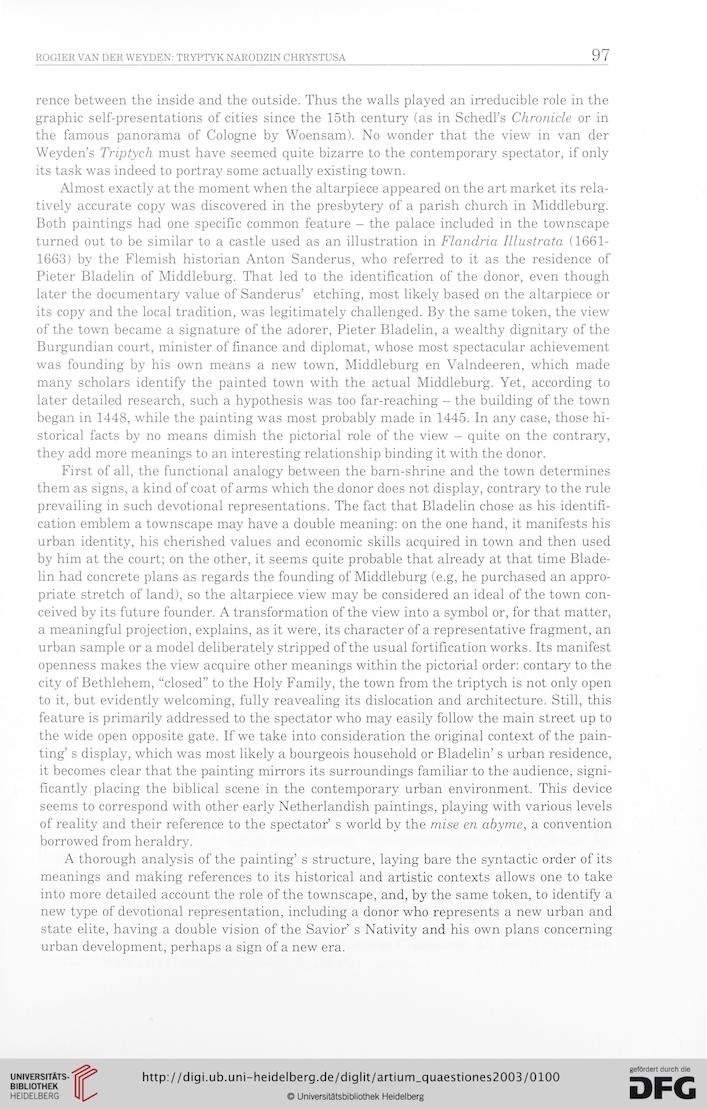 rence between the inside and the outside. Thus the walls played an irreducible role in the
graphic self-presentations of cities sińce the 15th century (as in SchedFs Chronicie or in
the famous panorama of Cologne by Woensam). No wonder that the view in van der
Weyden’s Triptych must have seemed ąuite bizarre to the contemporary spectator, if only
its task was indeed to portray some actually existing town.
Almost exactly at the moment when the altarpiece appeared on the art market its rela-
tively accurate copy was discovered in the presbytery of a parish church in Middleburg.
Both paintings had one specific common feature - the pałace included in the townscape
turned out to be similar to a castle used as an illustration in Flandria Illustrata (1661-
1663) by the Flemish historian Anton Sanderus, who referred to it as the residence of
Pieter Bladelin of Middleburg. That led to the Identification of the donor, even though
later the documentary value of Sanderus’ etching, most likely based on the altarpiece or
its copy and the local tradition, was legitimately challenged. By the same token, the view
of the town became a signature of the adorer, Pieter Bladelin, a wealthy dignitary of the
Burgundian court, minister of finance and diplomat, whose most spectacular achievement
was founding by his own means a new town, Middleburg en Valndeeren, which madę
many scholars identify the painted town with the actual Middleburg. Yet, according to
later detailed research, such a hypothesis was too far-reaching - the building of the town
began in 1448, while the painting was most probably madę in 1445. In any case, those hi-
storical facts by no means dimish the pictorial role of the view - ąuite on the contrary,
they add morę meanings to an interesting relationship binding it with the donor.
First of all, the functional analogy between the barn-shrine and the town determines
them as signs, a kind of coat of arms which the donor does not display, contrary to the rule
prevailing in such devotional representations. The fact that Bladelin chose as his identifi-
cation emblem a townscape may have a double meaning: on the one hand, it manifests his
urban identity, his cherished values and economic skills acąuired in town and then used
by him at the court; on the other, it seems ąuite probable that already at that time Blade-
lin had concrete plans as regards the founding of Middleburg (e.g, he purchased an appro-
priate stretch of land), so the altarpiece view may be considered an ideał of the town con-
ceived by its futurę founder. A transformation of the view into a symbol or, for that matter,
a meaningful projection, explains, as it were, its character of a representative fragment, an
urban sample or a model deliberately stripped of the usual fortification works. Its manifest
openness makes the view acąuire other meanings within the pictorial order: contary to the
city of Bethlehem, “closed” to the Holy Family, the town from the triptych is not only open
to it, but evidently welcoming, fully reavealing its dislocation and architecture. Still, this
feature is primarily addressed to the spectator who may easily follow the main Street up to
the wide open opposite gate. If we take into consideration the original context of the pain-
ting’ s display, which was most likely a bourgeois household or Bladelin’ s urban residence,
it becomes elear that the painting mirrors its surroundings familiar to the audience, signi-
ficantly placing the biblical scene in the contemporary urban environment. This device
seems to correspond with other early Netherlandish paintings, playing with various levels
of reality and their reference to the spectator’ s world by the misę en abyme, a convention
borrowed from heraldry.
A thorough analysis of the painting’ s structure, laying bare the syntactic order of its
meanings and making references to its historical and artistic contexts allows one to take
into morę detailed account the role of the townscape, and, by the same token, to identify a
new type of devotional representation, including a donor who represents a new urban and
State elite, having a double vision of the Savior’ s Nativity and his own plans conceming
urban development, perhaps a sign of a new era.