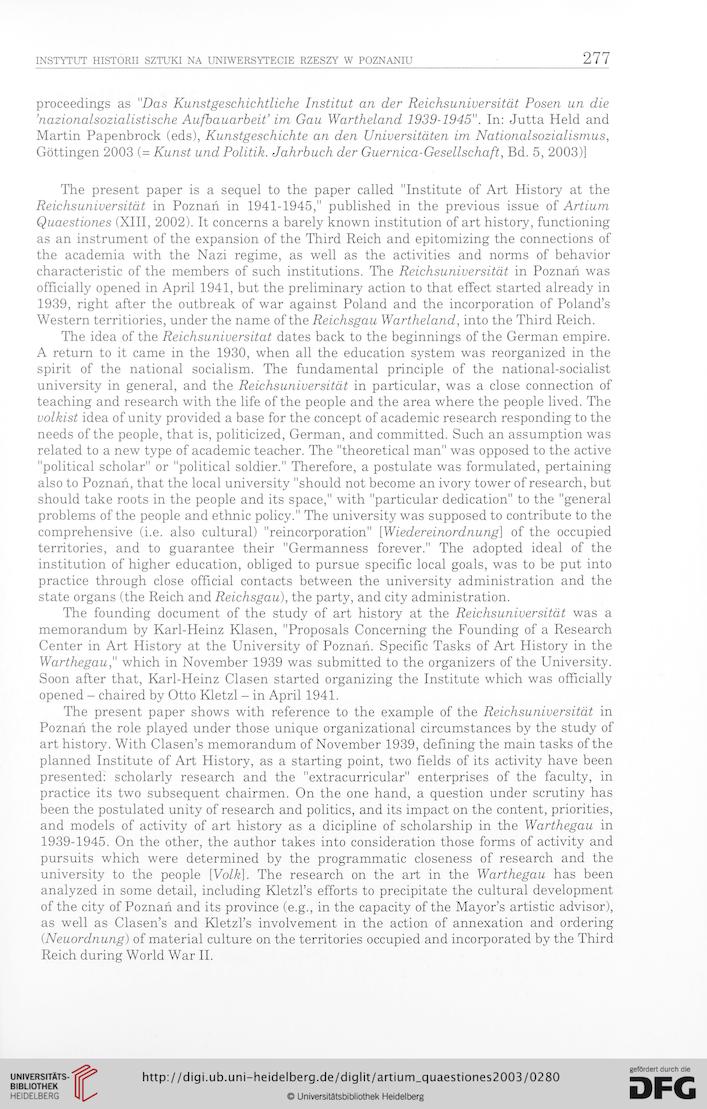 proceedings as "Das Kunstgeschichtliche Institut an der Reichsuniversitat Posen un die
’nazionalsozialistische Aufbauarbeit’ im Gau Wartheland 1939-1945". In: Jutta Held and
Martin Papenbrock (eds), Kunstgeschichte an den Unwersitaten im Nationalsozialismus,
Gottingen 2003 (= Kunst und Politik. Jahrbuch der Guernica-Gesellschaft, Bd. 5, 2003)]
The present paper is a seąuel to the paper called "Institute of Art History at the
Reichsuniuersitat in Poznań in 1941-1945," published in the previous issue of Artium
Quaestiones (XIII, 2002). It concerns a barely known institution of art history, functioning
as an instrument of the expansion of the Third Reich and epitomizing the connections of
the academia with the Nazi regime, as well as the activities and norms of behavior
characteristic of the members of such institutions. The Reichsuniversitdt in Poznań was
officially opened in April 1941, but the preliminary action to that effect started already in
1939, right after the outbreak of war against Poland and the incorporation of Poland’s
Western territiories, under the name of the Reichsgau Wartheland, into the Third Reich.
The idea of the Reichsuniuersitat dates back to the beginnings of the German empire.
A return to it came in the 1930, when all the education system was reorganized in the
spirit of the national socialism. The fundamental principle of the national-socialist
university in generał, and the Reichsuniuersitat in particular, was a close connection of
teaching and research with the life of the people and the area where the people lived. The
uolkist idea of unity provided a base for the concept of academic research responding to the
needs of the people, that is, politicized, German, and committed. Such an assumption was
related to a new type of academic teacher. The "theoretical man" was opposed to the active
"political scholar" or "political soldier." Therefore, a postulate was formulated, pertaining
also to Poznań, that the local university "should not become an wory tower of research, but
should take roots in the people and its space," with "particular dedication" to the "generał
problems of the people and ethnic policy." The university was supposed to contribute to the
comprehensive (i.e. also cultural) "reincorporation" [Wiedereinordnung] of the occupied
territories, and to guarantee their "Germanness forever." The adopted ideał of the
institution of higher education, obliged to pursue specific local goals, was to be put into
practice through close official contacts between the university administration and the
state organs (the Reich and Reichsgau), the party, and city administration.
The founding document of the study of art history at the Reichsuniuersitat was a
memorandum by Karl-Heinz Klasen, "Proposals Conceming the Founding of a Research
Center in Art History at the University of Poznań. Specific Tasks of Art History in the
Warthegau,” which in November 1939 was submitted to the organizers of the University.
Soon after that, Karl-Heinz Clasen started organizing the Institute which was officially
opened - chaired by Otto Kletzl - in April 1941.
The present paper shows with reference to the example of the Reichsuniuersitat in
Poznań the role played under those uniąue organizational circumstances by the study of
art history. With Clasen’s memorandum of November 1939, defining the main tasks of the
planned Institute of Art History, as a starting point, two fields of its activity have been
presented: scholarly research and the "extracurricular" enterprises of the faculty, in
practice its two subseąuent chairmen. On the one hand, a ąuestion under scrutiny has
been the postulated unity of research and politics, and its impact on the content, priorities,
and models of activity of art history as a dicipline of scholarship in the Warthegau in
1939-1945. On the other, the author takes into consideration those forms of activity and
pursuits which were determined by the programmatic closeness of research and the
university to the people [Volk\. The research on the art in the Warthegau has been
analyzed in some detail, including Kletzfs efforts to precipitate the cultural development
of the city of Poznań and its province (e.g., in the capacity of the Mayońs artistic advisor),
as well as Clasen’s and Kletzfs involvement in the action of annexation and ordering
(Neuordnung) of materiał culture on the territories occupied and incorporated by the Third
Reich during World War II.