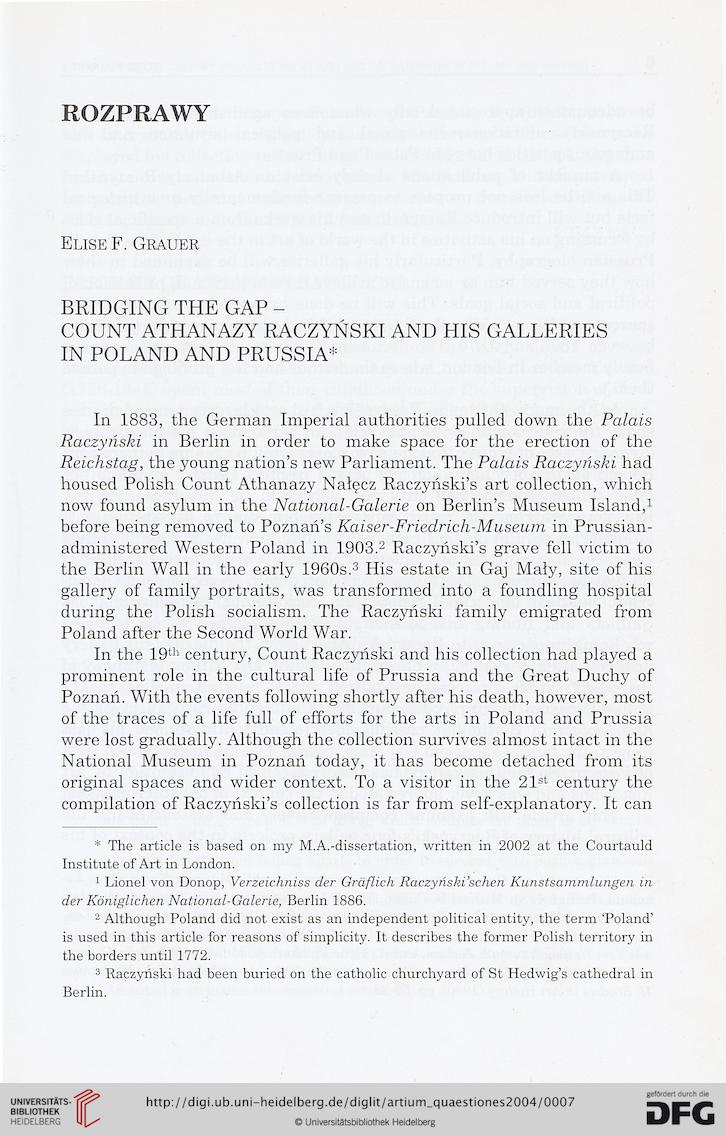 In 1883, the German Imperial authorities pulled down the Palais
Raczyński in Berlin in order to make space for the erection of the
Reichstag, the young nation’s new Parliament. The Palais Raczyński had
housed Polish Count Athanazy Nałęcz Raczyhski’s art collection, which
now found asylum in the National-Galerie on Berlin’s Museum Island,* 1
before being removed to Poznah’s Kaiser-Friedrich-Museum in Prussian-
administered Western Poland in 1903.2 Raczyhski’s grave fell victim to
the Berlin Wall in the early 1960s.3 His estate in Gaj Maly, site of his
gallery of family portraits, was transformed into a foundling hospital
during the Polish socialism. The Raczyński family emigrated from
Poland after the Second World War.
In the 19th century, Count Raczyński and his collection had played a
prominent role in the cultural life of Prussia and the Great Duchy of
Poznań. With the events following shortly after his death, however, most
of the traces of a life full of efforts for the arts in Poland and Prussia
were lost gradually. Although the collection survives almost intact in the
National Museum in Poznań today, it has become detached from its
original spaces and wider context. To a visitor in the 21st century the
compilation of Raczyhski’s collection is far from self-explanatory. It can

* The article is based on my M.A.-dissertation, written in 2002 at the Courtauld
Institute of Art in London.
1 Lionel von Donop, Verzeichniss der Gräflich Raczynski’schen Kunstsammlungen in
der Königlichen National-Galerie, Berlin 1886.
2 Although Poland did not exist as an independent political entity, the term ‘Poland’
is used in this article for reasons of simplicity. It describes the former Polish territory in
the borders until 1772.
3 Raczyński had been buried on the catholic churchyard of St Hedwig’s cathedral in
Berlin.