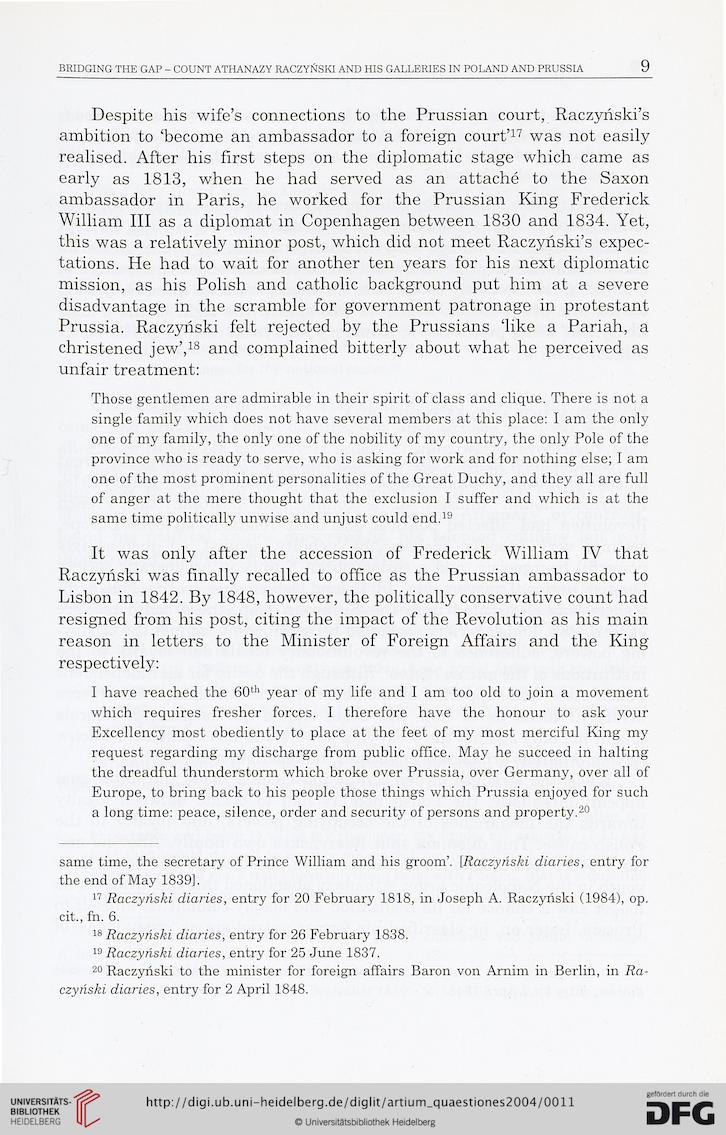 Despite his wife’s connections to the Prussian court, Raczyfiski’s
ambition to ‘become an ambassador to a foreign court’17 was not easily
realised. After his first steps on the diplomatic stage which came as
early as 1813, when he had served as an attaché to the Saxon
ambassador in Paris, he worked for the Prussian King Frederick
William III as a diplomat in Copenhagen between 1830 and 1834. Yet,
this was a relatively minor post, which did not meet Raczyhski’s expec-
tations. He had to wait for another ten years for his next diplomatic
mission, as his Polish and catholic background put him at a severe
disadvantage in the scramble for government patronage in protestant
Prussia. Raczyński felt rejected by the Prussians ‘like a Pariah, a
christened jew’,18 and complained bitterly about what he perceived as
unfair treatment:
Those gentlemen are admirable in their spirit of class and clique. There is not a
single family which does not have several members at this place: I am the only
one of my family, the only one of the nobility of my country, the only Pole of the
province who is ready to serve, who is asking for work and for nothing else; I am
one of the most prominent personalities of the Great Duchy, and they all are full
of anger at the mere thought that the exclusion I suffer and which is at the
same time politically unwise and unjust could end.19
It was only after the accession of Frederick William IV that
Raczyński was finally recalled to office as the Prussian ambassador to
Lisbon in 1842. By 1848, however, the politically conservative count had
resigned from his post, citing the impact of the Revolution as his main
reason in letters to the Minister of Foreign Affairs and the King
respectively:
I have reached the 60th year of my life and I am too old to join a movement
which requires fresher forces. I therefore have the honour to ask your
Excellency most obediently to place at the feet of my most merciful King my
request regarding my discharge from public office. May he succeed in halting
the dreadful thunderstorm which broke over Prussia, over Germany, over all of
Europe, to bring back to his people those things which Prussia enjoyed for such
a long time: peace, silence, order and security of persons and property.20