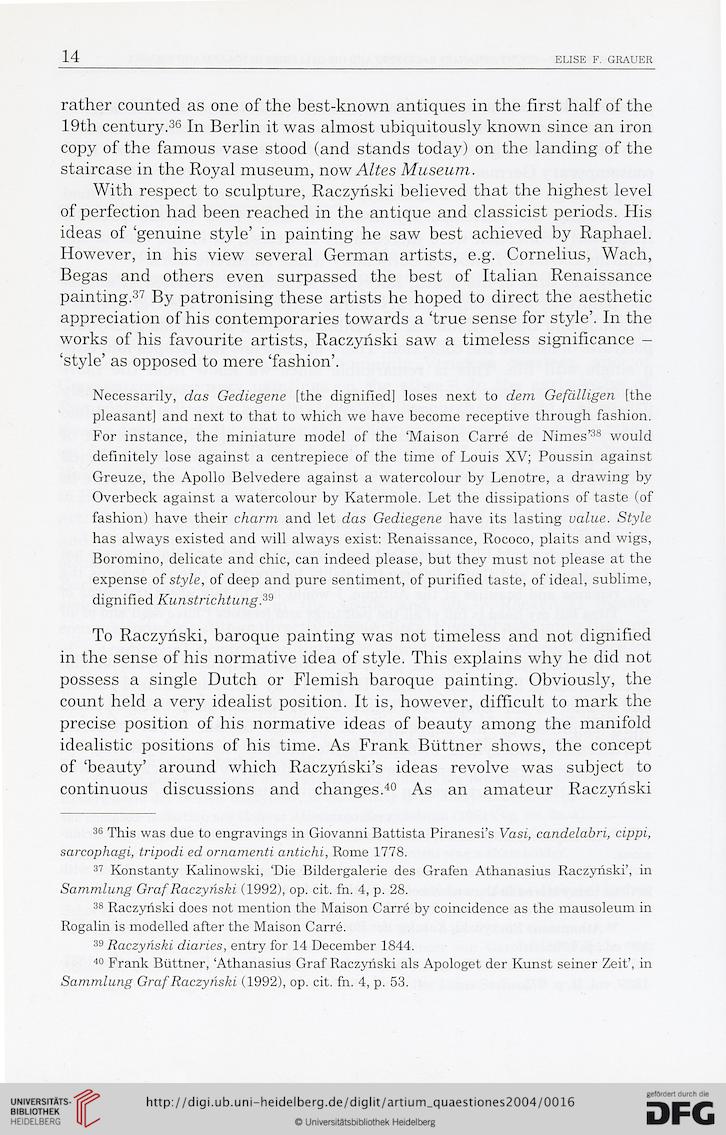 rather counted as one of the best-known antiques in the first half of the
19th century.36 In Berlin it was almost ubiquitously known since an iron
copy of the famous vase stood (and stands today) on the landing of the
staircase in the Royal museum, now Altes Museum.
With respect to sculpture, Raczyński believed that the highest level
of perfection had been reached in the antique and classicist periods. His
ideas of ‘genuine style’ in painting he saw best achieved by Raphael.
However, in his view several German artists, e.g. Cornelius, Wach,
Begas and others even surpassed the best of Italian Renaissance
painting.37 By patronising these artists he hoped to direct the aesthetic
appreciation of his contemporaries towards a ‘true sense for style’. In the
works of his favourite artists, Raczyński saw a timeless significance -
‘style’ as opposed to mere ‘fashion’.
Necessarily, das Gediegene [the dignified] loses next to dem, Gefälligen [the
pleasant] and next to that to which we have become receptive through fashion.
For instance, the miniature model of the ‘Maison Carré de Mmes’38 would
definitely lose against a centrepiece of the time of Louis XV; Poussin against
Greuze, the Apollo Belvedere against a watercolour by Lenotre, a drawing by
Overbeck against a watercolour by Katermole. Let the dissipations of taste (of
fashion) have their charm and let das Gediegene have its lasting value. Style
has always existed and will always exist: Renaissance, Rococo, plaits and wigs,
Boromino, delicate and chic, can indeed please, but they must not please at the
expense of style, of deep and pure sentiment, of purified taste, of ideal, sublime,
dignified Kunstrichtung.39
To Raczyński, baroque painting was not timeless and not dignified
in the sense of his normative idea of style. This explains why he did not
possess a single Dutch or Flemish baroque painting. Obviously, the
count held a very idealist position. It is, however, difficult to mark the
precise position of his normative ideas of beauty among the manifold
idealistic positions of his time. As Frank Büttner shows, the concept
of ‘beauty’ around which Raczyhski’s ideas revolve was subject to
continuous discussions and changes.40 As an amateur Raczyński