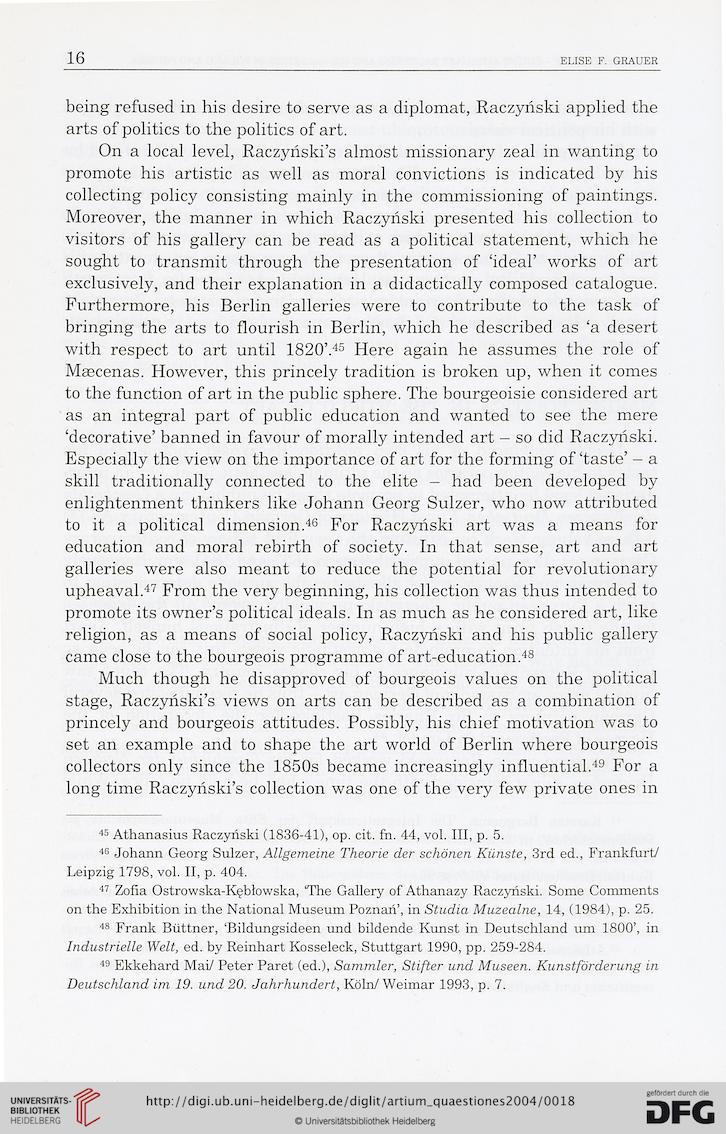 being refused in his desire to serve as a diplomat, Raczyński applied the
arts of politics to the politics of art.
On a local level, Raczyhski’s almost missionary zeal in wanting to
promote his artistic as well as moral convictions is indicated by his
collecting policy consisting mainly in the commissioning of paintings.
Moreover, the manner in which Raczyński presented his collection to
visitors of his gallery can be read as a political statement, which he
sought to transmit through the presentation of ‘ideal’ works of art
exclusively, and their explanation in a didactically composed catalogue.
Furthermore, his Berlin galleries were to contribute to the task of
bringing the arts to flourish in Berlin, which he described as ‘a desert
with respect to art until 1820’.45 Here again he assumes the role of
Maecenas. However, this princely tradition is broken up, when it comes
to the function of art in the public sphere. The bourgeoisie considered art
as an integral part of public education and wanted to see the mere
‘decorative’ banned in favour of morally intended art - so did Raczyński.
Especially the view on the importance of art for the forming of ‘taste’ - a
skill traditionally connected to the elite - had been developed by
enlightenment thinkers like Johann Georg Sulzer, who now attributed
to it a political dimension.46 For Raczyński art was a means for
education and moral rebirth of society. In that sense, art and art
galleries were also meant to reduce the potential for revolutionary
upheaval.47 From the very beginning, his collection was thus intended to
promote its owner’s political ideals. In as much as he considered art, like
religion, as a means of social policy, Raczyński and his public gallery
came close to the bourgeois programme of art-education.48
Much though he disapproved of bourgeois values on the political
stage, Raczyhski’s views on arts can be described as a combination of
princely and bourgeois attitudes. Possibly, his chief motivation was to
set an example and to shape the art world of Berlin where bourgeois
collectors only since the 1850s became increasingly influential.49 For a
long time Raczyirski’s collection was one of the very few private ones in