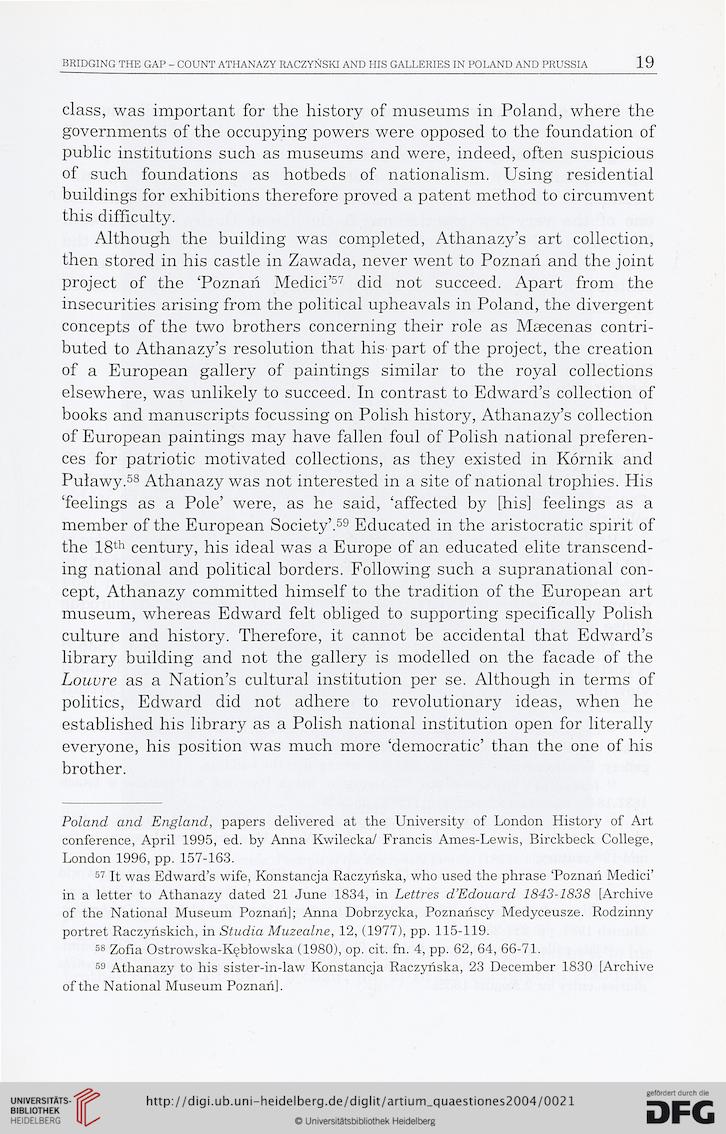 class, was important for the history of museums in Poland, where the
governments of the occupying powers were opposed to the foundation of
public institutions such as museums and were, indeed, often suspicious
of such foundations as hotbeds of nationalism. Using residential
buildings for exhibitions therefore proved a patent method to circumvent
this difficulty.
Although the building was completed, Athanazy’s art collection,
then stored in his castle in Zawada, never went to Poznań and the joint
project of the ‘Poznań Medici’57 did not succeed. Apart from the
insecurities arising from the political upheavals in Poland, the divergent
concepts of the two brothers concerning their role as Maecenas contri-
buted to Athanazy’s resolution that his part of the project, the creation
of a European gallery of paintings similar to the royal collections
elsewhere, was unlikely to succeed. In contrast to Edward’s collection of
books and manuscripts focussing on Polish history, Athanazy’s collection
of European paintings may have fallen foul of Polish national preferen-
ces for patriotic motivated collections, as they existed in Kórnik and
Puławy.58 Athanazy was not interested in a site of national trophies. His
‘feelings as a Pole’ were, as he said, ‘affected by [his] feelings as a
member of the European Society’.59 Educated in the aristocratic spirit of
the 18th century, his ideal was a Europe of an educated elite transcend-
ing national and political borders. Following such a supranational con-
cept, Athanazy committed himself to the tradition of the European art
museum, whereas Edward felt obliged to supporting specifically Polish
culture and history. Therefore, it cannot be accidental that Edward’s
library building and not the gallery is modelled on the facade of the
Louvre as a Nation’s cultural institution per se. Although in terms of
politics, Edward did not adhere to revolutionary ideas, when he
established his library as a Polish national institution open for literally
everyone, his position was much more ‘democratic’ than the one of his
brother.