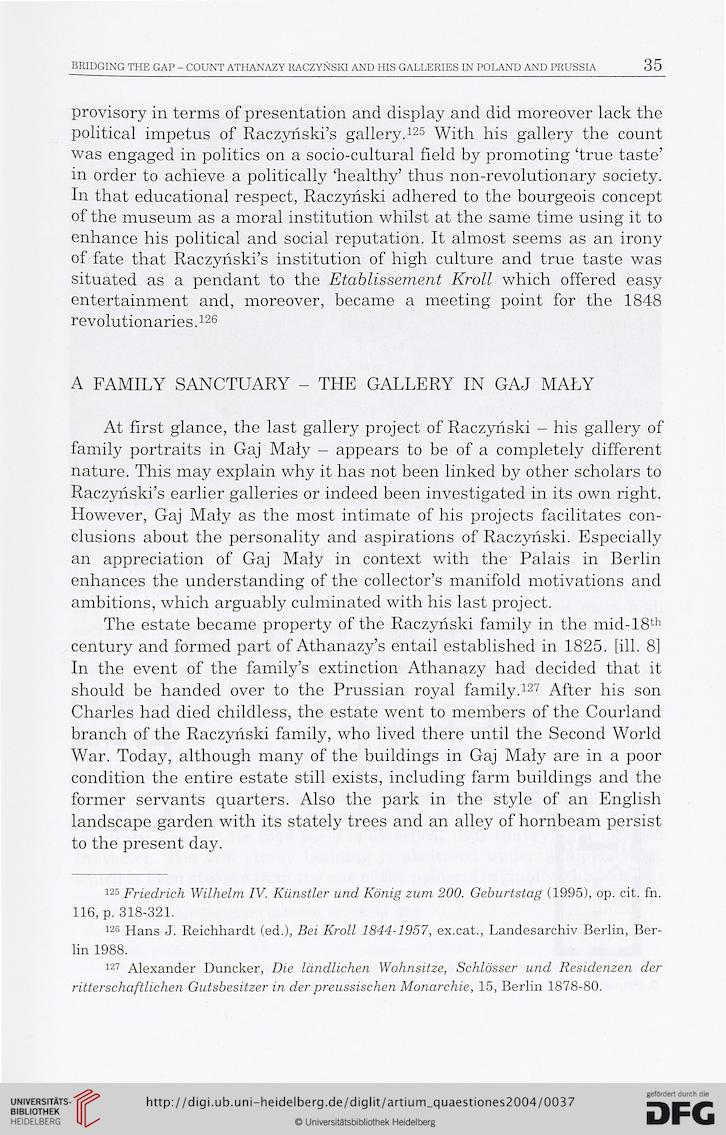 provisory in terms of presentation and display and did moreover lack the
political impetus of Raczyhski’s gallery.125 With his gallery the count
was engaged in politics on a socio-cultural field by promoting ‘true taste’
in order to achieve a politically ‘healthy’ thus non-revolutionary society.
In that educational respect, Raczyński adhered to the bourgeois concept
of the museum as a moral institution whilst at the same time using it to
enhance his political and social reputation. It almost seems as an irony
of fate that Raczyfiski’s institution of high culture and true taste was
situated as a pendant to the Etablissement Kroll which offered easy
entertainment and, moreover, became a meeting point for the 1848
revolutionaries.126

A FAMILY SANCTUARY - THE GALLERY IN GAJ MALY
At first glance, the last gallery project of Raczyński - his gallery of
family portraits in Gaj Maly - appears to be of a completely different
nature. This may explain why it has not been linked by other scholars to
Raczyhski’s earlier galleries or indeed been investigated in its own right.
However, Gaj Maly as the most intimate of his projects facilitates con-
clusions about the personality and aspirations of Raczyński. Especially
an appreciation of Gaj Maly in context with the Palais in Berlin
enhances the understanding of the collector’s manifold motivations and
ambitions, which arguably culminated with his last project.
The estate became property of the Raczyński family in the mid-18th
century and formed part of Athanazy’s entail established in 1825. [ill. 8]
In the event of the family’s extinction Athanazy had decided that it
should be handed over to the Prussian royal family.127 After his son
Charles had died childless, the estate went to members of the Courland
branch of the Raczyński family, who lived there until the Second World
War. Today, although many of the buildings in Gaj Maly are in a poor
condition the entire estate still exists, including farm buildings and the
former servants quarters. Also the park in the style of an English
landscape garden with its stately trees and an alley of hornbeam persist
to the present day.