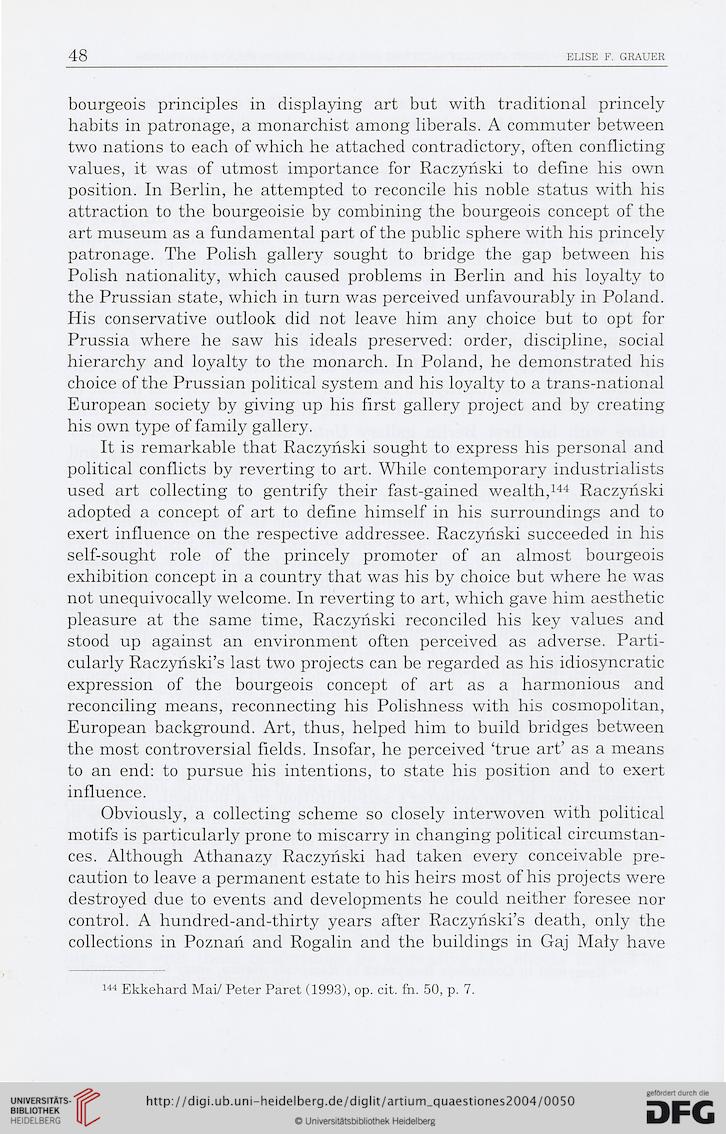 bourgeois principles in displaying art but with traditional princely
habits in patronage, a monarchist among liberals. A commuter between
two nations to each of which he attached contradictory, often conflicting
values, it was of utmost importance for Raczyński to define his own
position. In Berlin, he attempted to reconcile his noble status with his
attraction to the bourgeoisie by combining the bourgeois concept of the
art museum as a fundamental part of the public sphere with his princely
patronage. The Polish gallery sought to bridge the gap between his
Polish nationality, which caused problems in Berlin and his loyalty to
the Prussian state, which in turn was perceived unfavourably in Poland.
His conservative outlook did not leave him any choice but to opt for
Prussia where he saw his ideals preserved: order, discipline, social
hierarchy and loyalty to the monarch. In Poland, he demonstrated his
choice of the Prussian political system and his loyalty to a trans-national
European society by giving up his first gallery project and by creating
his own type of family gallery.
It is remarkable that Raczyński sought to express his personal and
political conflicts by reverting to art. While contemporary industrialists
used art collecting to gentrify their fast-gained wealth,144 Raczyński
adopted a concept of art to define himself in his surroundings and to
exert influence on the respective addressee. Raczyński succeeded in his
self-sought role of the princely promoter of an almost bourgeois
exhibition concept in a country that was his by choice but where he was
not unequivocally welcome. In reverting to art, which gave him aesthetic
pleasure at the same time, Raczyński reconciled his key values and
stood up against an environment often perceived as adverse. Parti-
cularly Raczyńskfis last two projects can be regarded as his idiosyncratic
expression of the bourgeois concept of art as a harmonious and
reconciling means, reconnecting his Polishness with his cosmopolitan,
European background. Art, thus, helped him to build bridges between
the most controversial fields. Insofar, he perceived ‘true art’ as a means
to an end: to pursue his intentions, to state his position and to exert
influence.
Obviously, a collecting scheme so closely interwoven with political
motifs is particularly prone to miscarry in changing political circumstan-
ces. Although Athanazy Raczyński had taken every conceivable pre-
caution to leave a permanent estate to his heirs most of his projects were
destroyed due to events and developments he could neither foresee nor
control. A hundred-and-thirty years after Raczyhski’s death, only the
collections in Poznań and Rogalin and the buildings in Gaj Maly have