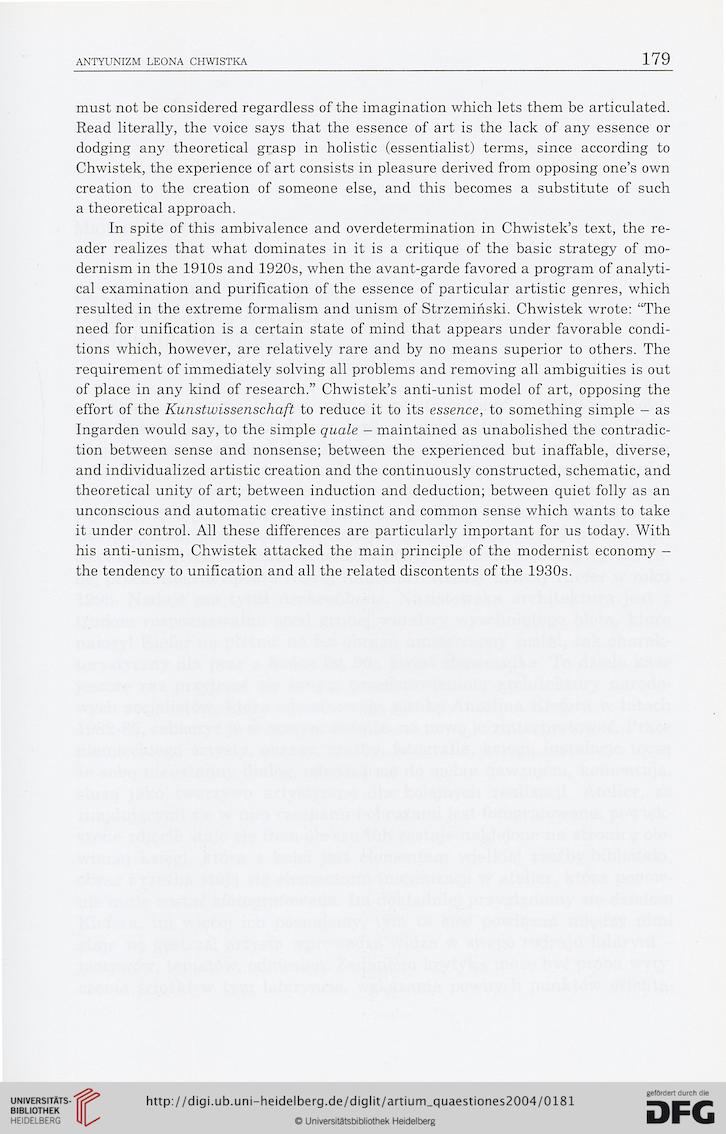 must not be considered regardless of the imagination which lets them be articulated.
Read literally, the voice says that the essence of art is the lack of any essence or
dodging any theoretical grasp in holistic (essentialist) terms, since according to
Chwistek, the experience of art consists in pleasure derived from opposing one’s own
creation to the creation of someone else, and this becomes a substitute of such
a theoretical approach.
In spite of this ambivalence and overdetermination in Chwistek’s text, the re-
ader realizes that what dominates in it is a critique of the basic strategy of mo-
dernism in the 1910s and 1920s, when the avant-garde favored a program of analyti-
cal examination and purification of the essence of particular artistic genres, which
resulted in the extreme formalism and unism of Strzemiński. Chwistek wrote: “The
need for unification is a certain state of mind that appears under favorable condi-
tions which, however, are relatively rare and by no means superior to others. The
requirement of immediately solving all problems and removing all ambiguities is out
of place in any kind of research.” Chwistek’s anti-unist model of art, opposing the
effort of the Kunstwissenschaft to reduce it to its essence, to something simple — as
Ingarden would say, to the simple quale - maintained as unabolished the contradic-
tion between sense and nonsense; between the experienced but inaffable, diverse,
and individualized artistic creation and the continuously constructed, schematic, and
theoretical unity of art; between induction and deduction; between quiet folly as an
unconscious and automatic creative instinct and common sense which wants to take
it under control. All these differences are particularly important for us today. With
his anti-unism, Chwistek attacked the main principle of the modernist economy -
the tendency to unification and all the related discontents of the 1930s.