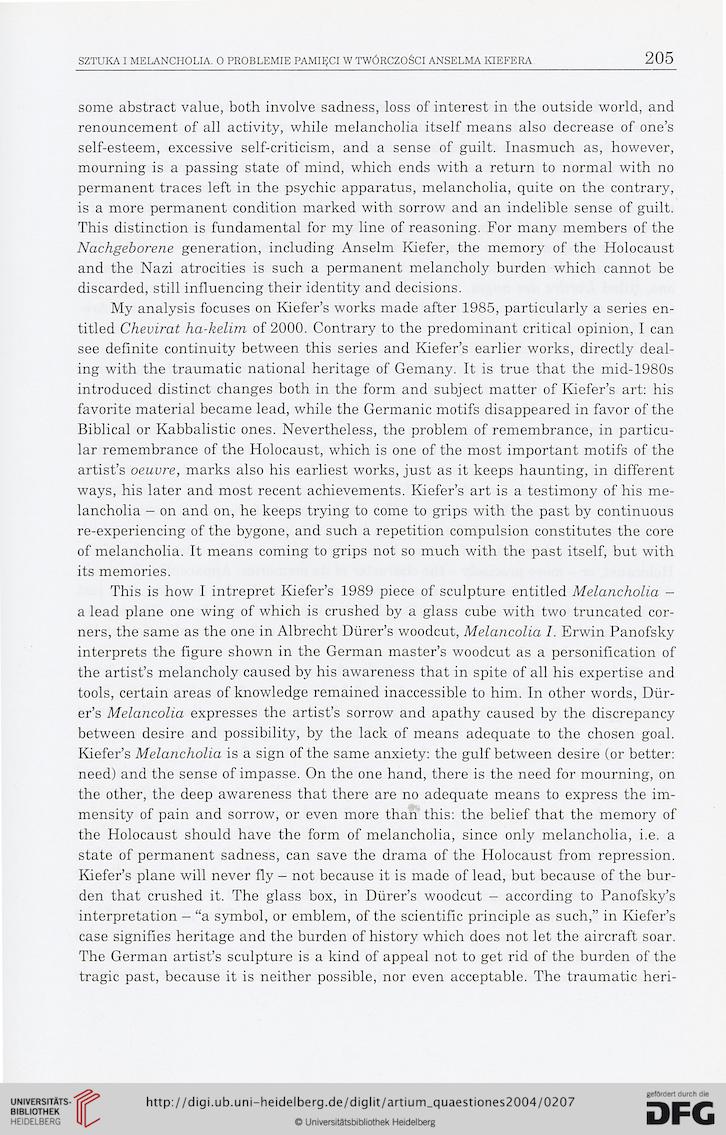 some abstract value, both involve sadness, loss of interest in the outside world, and
renouncement of all activity, while melancholia itself means also decrease of one’s
self-esteem, excessive self-criticism, and a sense of guilt. Inasmuch as, however,
mourning is a passing state of mind, which ends with a return to normal with no
permanent traces left in the psychic apparatus, melancholia, quite on the contrary,
is a more permanent condition marked with sorrow and an indelible sense of guilt.
This distinction is fundamental for my line of reasoning. For many members of the
Nachgeborene generation, including Anselm Kiefer, the memory of the Holocaust
and the Nazi atrocities is such a permanent melancholy burden which cannot be
discarded, still influencing their identity and decisions.
My analysis focuses on Kiefer’s works made after 1985, particularly a series en-
titled Chevirat ha-kelim of 2000. Contrary to the predominant critical opinion, I can
see definite continuity between this series and Kiefer’s earlier works, directly deal-
ing with the traumatic national heritage of Gemany. It is true that the mid-1980s
introduced distinct changes both in the form and subject matter of Kiefer’s art: his
favorite material became lead, while the Germanic motifs disappeared in favor of the
Biblical or Kabbalistic ones. Nevertheless, the problem of remembrance, in particu-
lar remembrance of the Holocaust, which is one of the most important motifs of the
artist’s oeuvre, marks also his earliest works, just as it keeps haunting, in different
ways, his later and most recent achievements. Kiefer’s art is a testimony of his me-
lancholia - on and on, he keeps trying to come to grips with the past by continuous
re-experiencing of the bygone, and such a repetition compulsion constitutes the core
of melancholia. It means coming to grips not so much with the past itself, but with
its memories.
This is how I intrepret Kiefer’s 1989 piece of sculpture entitled Melancholia -
a lead plane one wing of which is crushed by a glass cube with two truncated cor-
ners, the same as the one in Albrecht Dürer’s woodcut, Melancolia I. Erwin Panofsky
interprets the figure shown in the German master’s woodcut as a personification of
the artist’s melancholy caused by his awareness that in spite of all his expertise and
tools, certain areas of knowledge remained inaccessible to him. In other words, Dür-
er’s Melancolia expresses the artist’s sorrow and apathy caused by the discrepancy
between desire and possibility, by the lack of means adequate to the chosen goal.
Kiefer’s Melancholia is a sign of the same anxiety: the gulf between desire (or better:
need) and the sense of impasse. On the one hand, there is the need for mourning, on
the other, the deep awareness that there are no adequate means to express the im-
mensity of pain and sorrow, or even more than this: the belief that the memory of
the Holocaust should have the form of melancholia, since only melancholia, i.e. a
state of permanent sadness, can save the drama of the Holocaust from repression.
Kiefer’s plane will never fly - not because it is made of lead, but because of the bur-
den that crushed it. The glass box, in Dürer’s woodcut — according to Panofsky’s
interpretation - “a symbol, or emblem, of the scientific principle as such,” in Kiefer’s
case signifies heritage and the burden of history which does not let the aircraft soar.
The German artist’s sculpture is a kind of appeal not to get rid of the burden of the
tragic past, because it is neither possible, nor even acceptable. The traumatic heri-