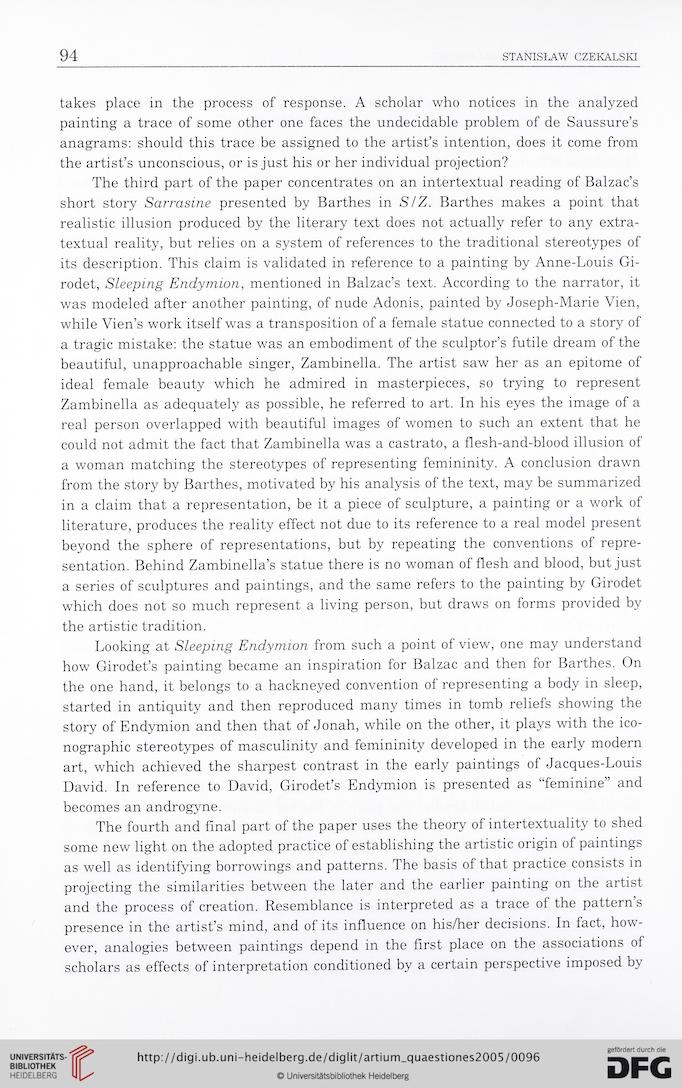 takes place in the process of response. A scholar who notices in the analyzed
painting a tracę of some other one faces the undecidable problem of de Saussure’s
anagrams: should this tracę be assigned to the artisfs intention, does it come from
the artisfs unconscious, or is just his or her individual projection?
The third part of the paper concentrates on an intertextual reading of Balzac’s
short story Sarrasine presented by Barthes in S/Z. Barthes makes a point that
realistic illusion produced by the literary text does not actually refer to any extra-
textual reality, but relies on a system of references to the traditional stereotypes of
its description. This claim is validated in reference to a painting by Anne-Louis Gi-
rodet, Sleeping Endymion, mentioned in Balzac’s text. According to the narrator, it
was modeled after another painting, of nudę Adonis, painted by Joseph-Marie Vien,
while Vien’s work itself was a transposition of a female statuę connected to a story of
a tragic mistake: the statuę was an embodiment of the sculptor’s futile dream of the
beautiful, unapproachable singer, Zambinella. The artist saw her as an epitome of
ideał female beauty which he admired in masterpieces, so trying to represent
Zambinella as adeąuately as possible, he referred to art. In his eyes the image of a
real person overlapped with beautiful images of women to such an extent that he
could not admit the fact that Zambinella was a castrato, a flesh-and-blood illusion of
a woman matching the stereotypes of representing femininity. A conclusion drawn
from the story by Barthes, motivated by his analysis of the text, may be summarized
in a claim that a representation, be it a piece of sculpture, a painting or a work of
literaturę, produces the reality effect not due to its reference to a real model present
beyond the sphere of representations, but by repeating the conventions of repre-
sentation. Behind Zambinella’s statuę there is no woman of flesh and blood, but just
a series of sculptures and paintings, and the same refers to the painting by Girodet
which does not so much represent a living person, but draws on forms provided by
the artistic tradition.
Looking at Sleeping Endymion from such a point of view, one may understand
how Girodefs painting became an inspiration for Balzac and then for Barthes. On
the one hand, it belongs to a hackneyed convention of representing a body in sleep,
started in antiąuity and then reproduced many times in tomb reliefs showing the
story of Endymion and then that of Jonah, while on the other, it plays with the ico-
nographic stereotypes of masculinity and femininity developed in the early modern
art, which achieved the sharpest contrast in the early paintings of Jacąues-Louis
David. In reference to David, Girodefs Endymion is presented as “feminine” and
becomes an androgyne.
The fourth and finał part of the paper uses the theory of intertextuality to shed
some new light on the adopted practice of establishing the artistic origin of paintings
as well as identifying borrowings and patterns. The basis of that practice consists in
projecting the similarities between the later and the earlier painting on the artist
and the process of creation. Resemblance is interpreted as a tracę of the pattern’s
presence in the artisfs mind, and of its influence on his/her decisions. In fact, how-
ever, analogies between paintings depend in the first place on the associations of
scholars as effects of interpretation conditioned by a certain perspective imposed by