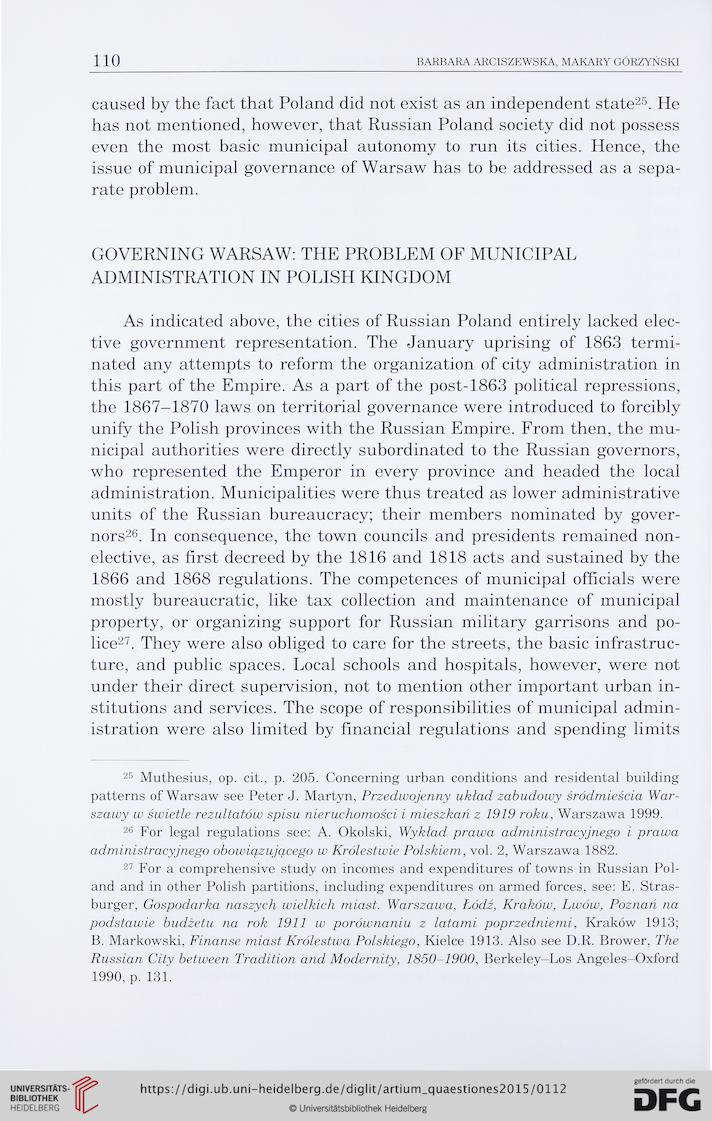 caused by the fact that Poland did not exist as an independent state25. He
has not mentioned, however, that Russian Poland society did not possess
even the most basic municipal autonomy to run its cities. Hence, the
issue of municipal governance of Warsaw has to be addressed as a sepa-
rate problem.

GOVERNING WARSAW: THE PROBLEM OF MUNICIPAL
ADMINISTRATION IN POLISH KINGDOM
As indicated above, the cities of Russian Poland entirely lacked elec-
tive government representation. The January uprising of 1863 termi-
nated any attempts to reform the organization of city administration in
this part of the Empire. As a part of the post-1863 political repressions,
the 1867-1870 laws on territorial governance were introduced to forcibly
unify the Polish provinces with the Russian Empire. From then, the mu-
nicipal authorities were directly subordinated to the Russian governors,
who represented the Emperor in every province and headed the local
administration. Municipalities were thus treated as lower administrative
units of the Russian bureaucracy; their members nominated by gover-
nors26. In consequence, the town councils and presidents remained non-
elective, as first decreed by the 1816 and 1818 acts and sustained by the
1866 and 1868 regulations. The competences of municipal officials were
mostly bureaucratic, like tax collection and maintenance of municipal
property, or organizing support for Russian military garrisons and po-
lice27. They were also obliged to care for the streets, the basic infrastruc-
ture, and public spaces. Local schools and hospitals, however, were not
under their direct supervision, not to mention other important urban in-
stitutions and services. The scope of responsibilities of municipal admin-
istration were also limited by financial regulations and spending limits