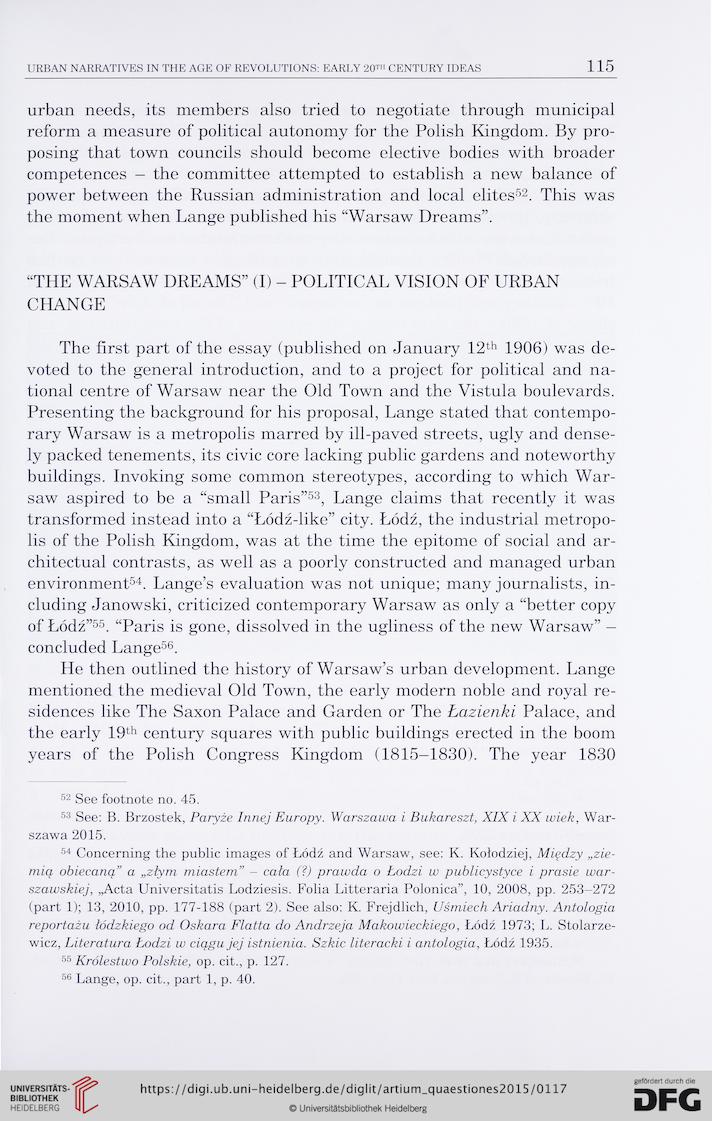 urban needs, its members also tried to negotiate through municipal
reform a measure of political autonomy for the Polish Kingdom. By pro-
posing that town councils should become elective bodies with broader
competences - the committee attempted to establish a new balance of
power between the Russian administration and local elites52. This was
the moment when Lange published his “Warsaw Dreams”.

“THE WARSAW DREAMS” (I) - POLITICAL VISION OF URBAN
CHANGE
The hrst part of the essay (published on January 12th 1906) was de-
voted to the general introduction, and to a project for political and na-
tional centre of Warsaw near the Old Town and the Vistula boulevards.
Presenting the background for his proposal, Lange stated that contempo-
rary Warsaw is a metropolis marred by ill-paved streets, ugly and dense-
ly packed tenements, its civic core lacking public gardens and noteworthy
buildings. Invoking some common stereotypes, according to which War-
saw aspired to be a “small Paris”53, Lange claims that recently it was
transformed instead into a “Łódź-like” city. Łódź, the industrial metropo-
lis of the Polish Kingdom, was at the time the epitome of social and ar-
chitectual contrasts, as well as a poorly constructed and managed urban
environment54. Lange’s evaluation was not unique; many journalists, in-
cluding Janowski, criticized contemporary Warsaw as only a “better copy
of Łódź”55. “Paris is gone, dissolved in the ugliness of the new Warsaw” -
concluded Lange56.
He then outlined the history of Warsaw’s urban development. Lange
mentioned the medieval Old Town, the early modern noble and royal re-
sidences like The Saxon Palace and Garden or The Łazienki Palace, and
the early 19th century squares with public buildings erected in the boom
years of the Polish Congress Kingdom (1815-1830). The year 1830