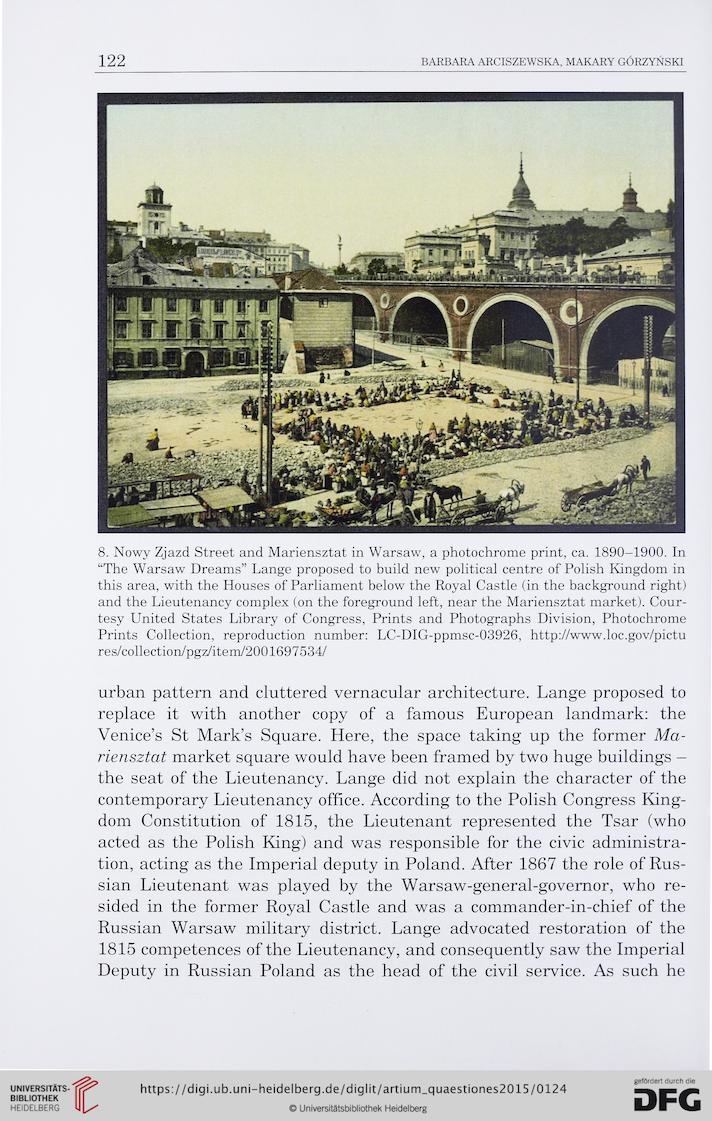 
8. Nowy Zjazd Street and Mariensztat in Warsaw, a photochrome print, ca. 1890-1900. In
“The Warsaw Dreams” Lange proposed to build new political centre of Polish Kingdom in
this area, with the Houses of Parliament below the Royal Castle (in the background right)
and the Lieutenancy complex (on the foreground left, near the Mariensztat market). Cour-
tesy United States Library of Congress, Prints and Photographs Division, Photochrome
Prints Collection, reproduction number: LC-DIG-ppmsc-03926, http://www.loc.gov/pictu
res/collection/pgz/item/2001697534/
urban pattern and cluttered vernacular architecture. Lange proposed to
replace it with another copy of a famous European landmark: the
Venice’s St Mark’s Square. Here, the space taking up the former Ma-
riensztat market square would have been framed by two huge buildings -
the seat of the Lieutenancy. Lange did not explain the character of the
contemporary Lieutenancy office. According to the Polish Congress King-
dom Constitution of 1815, the Lieutenant represented the Tsar (who
acted as the Polish King) and was responsible for the civic administra-
tion, acting as the Imperial deputy in Poland. After 1867 the role of Rus-
sian Lieutenant was played by the Warsaw-general-govemor, who re-
sided in the former Royal Castle and was a commander-in-chief of the
Russian Warsaw military district. Lange advocated restoration of the
1815 competences of the Lieutenancy, and consequently saw the Imperial
Deputy in Russian Poland as the head of the civil service. As such he