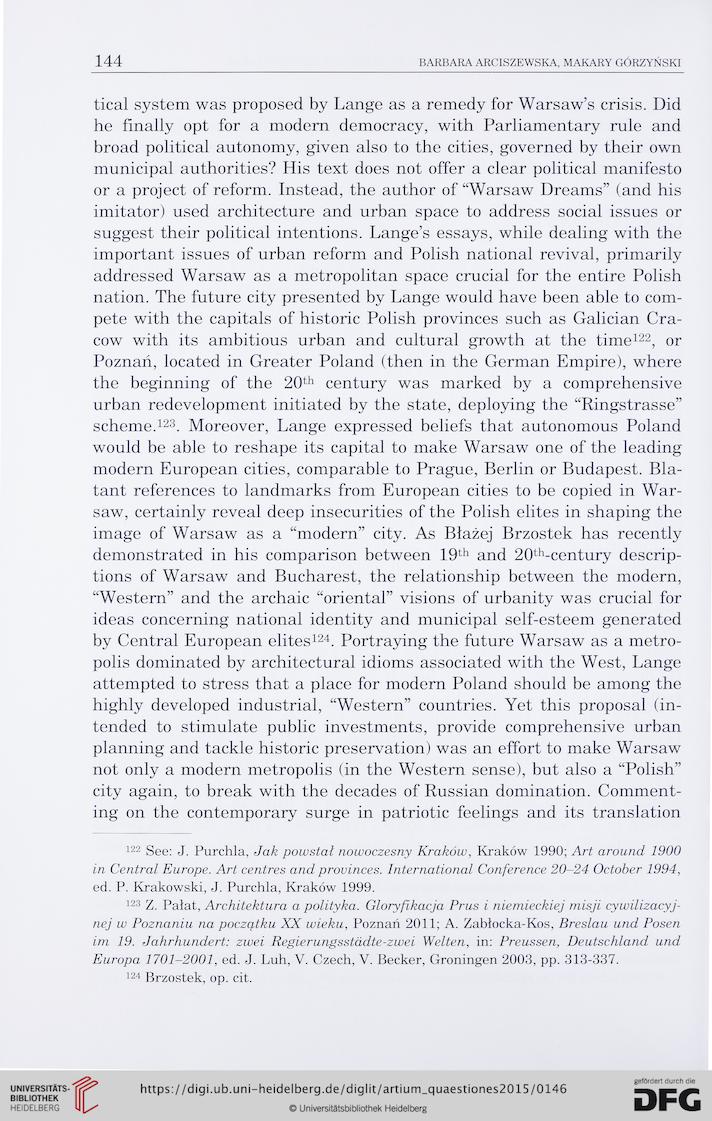 tical system was proposed by Lange as a remedy for Warsaw’s crisis. Did
he finally opt for a modern democracy, with Parliamentary rule and
broad political autonomy, given also to the cities, governed by their own
municipal authorities? His text does not offer a clear political manifesto
or a project of reform. Instead, the author of “Warsaw Dreams” (and his
imitator) used architecture and urban space to address social issues or
suggest their political intentions. Lange’s essays, while dealing with the
important issues of urban reform and Polish national revival, primarily
addressed Warsaw as a metropolitan space crucial for the entire Polish
nation. The future city presented by Lange would have been able to com-
pete with the capitals of historic Polish provinces such as Galician Cra-
cow with its ambitious urban and cultural growth at the time122, or
Poznań, located in Greater Poland (then in the German Empire), where
the beginning of the 20th century was marked by a comprehensive
urban redevelopment initiated by the state, deploying the “Ringstrasse”
scheme.123. Moreover, Lange expressed beliefs that autonomous Poland
would be able to reshape its capital to make Warsaw one of the leading
modern European cities, comparable to Prague, Berlin or Budapest. Bla-
tant references to landmarks from European cities to be copied in War-
saw, certainly reveal deep insecurities of the Polish elites in shaping the
image of Warsaw as a “modern” city. As Błażej Brzostek has recently
demonstrated in his comparison between 19th and 20th-century descrip-
tions of Warsaw and Bucharest, the relationship between the modern,
“Western” and the archaic “oriental” visions of urbanity was crucial for
ideas concerning national identity and municipal self-esteem generated
by Central European elites124. Portraying the future Warsaw as a metro-
polis dominated by architectural idioms associated with the West, Lange
attempted to stress that a place for modern Poland should be among the
highly developed industrial, “Western” countries. Yet this proposal (in-
tended to stimulate public investments, provide comprehensive urban
planning and tackle historic preservation) was an effort to make Warsaw
not only a modern metropolis (in the Western sense), but also a “Polish”
city again, to break with the decades of Russian domination. Comment-
ing on the contemporary surge in patriotic feelings and its translation