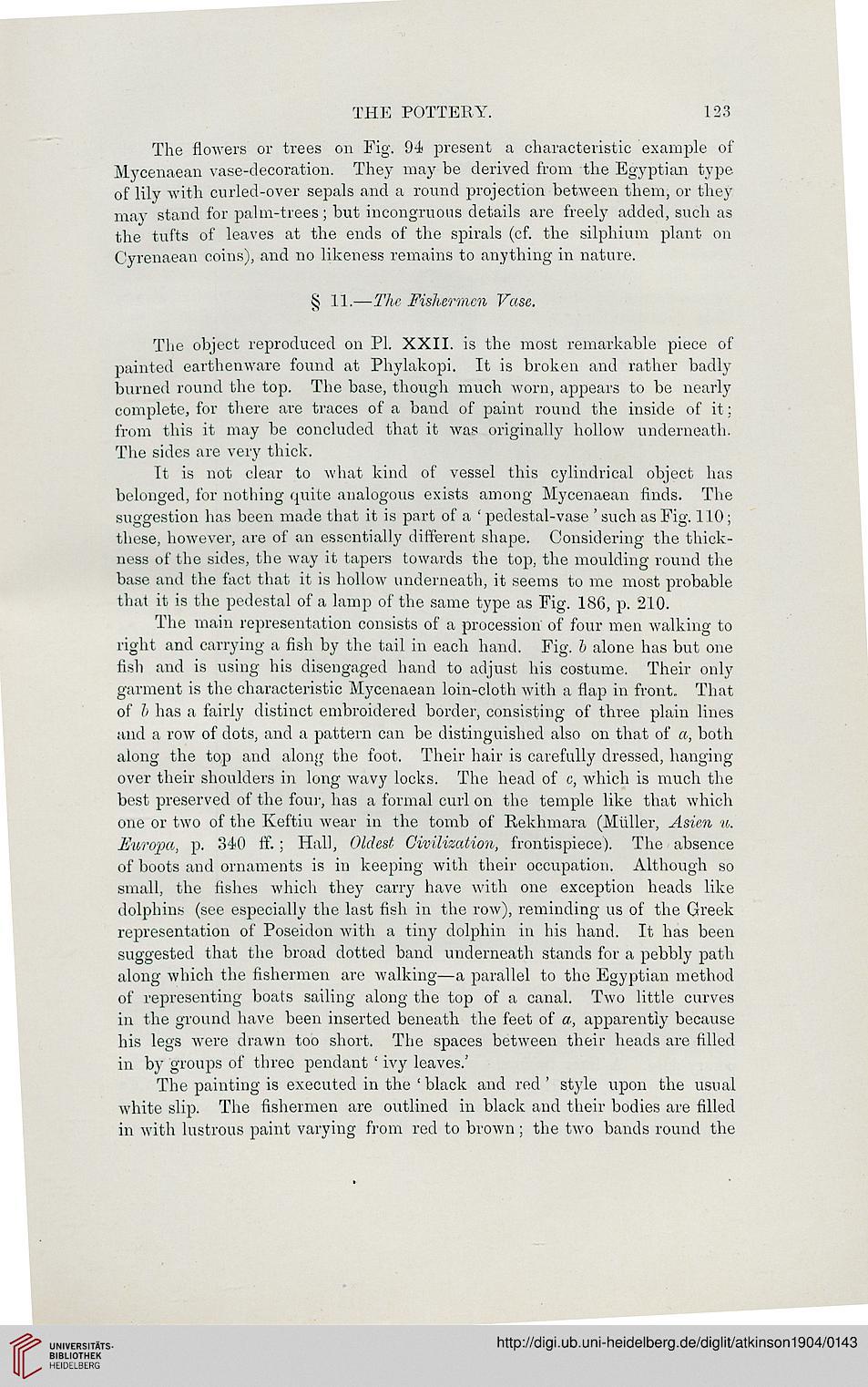 Information about OCR text
THE POTTERY.

The flowers or trees on Fig. 9-A present a characteristic example of
Mycenaean vase-decoration. They may be derived from the Egyptian type
of lily with curled-over sepals and a round projection between them, or they
may stand f'or palin-trees ; but incongruous details are freely added, such as
the tufts of leaves at the ends of the spirals (cf. the silphium plant on
Cyrenaean coins), and no likeness remains to anything in nature.

Tlie object reproduced on PL XXII. is the most remarkable piece of
painted earthenware found at Phylakopi. It is broken and rather badly
burned round the top. The base, thougli much worn, appears to be nearly
complete, for there are traces of a band of paint round the inside of it;
from this it may be concluded that it was originally hollow underneath.
The sides are very thick.

It is not clear to what kind of vessel this cylindrical object has
belonged, for notliing quite analogous exists among Mycenaean finds. The
Suggestion has been made that it is part of a ' pedestal-vase ' such as Fig. 110;
these, however, are of an essentially different shape. Considering the thick-
ness of the sides, the way it tapers towards the top, the moulding round the
base and the fact that it is hollow underneath, it seems to me most probable
that it is the pedestal of a lamp of the same type as Fig. 186, p. 210.

The main representation consists of a procession of four men Walking to
right and carrying a fish by the tail in each band. Fig. b alone has but one
fish and is using his disengaged band to adjust Ins costume. Their only
garment is the characteristic Mycenaean loin-cloth with a Aap in front. That
of h has a fairly distinet embroidered border, consisting of three piain lines
and a row of dots, and a pattern can be distinguished also on that of a, both
along the top and along the foot. Their hair is carefully dressed, hanging
over their Shoulders in long wavy locks. The head of c, which is much the
best preserved of the four, has a formal curl on the temple like that which
one or two of the Keftiu wear in the tomb of Rekhmara (Müller, Asien n.
Europa, p. 340 ff. ; Hall, Oldest Civilization, frontispiece). The absence
of boots and Ornaments is in keeping with their occupation. Although so
small, the fishes which they carry have with one exception heads like
dolphins (see esiiecially the last fish in the row), reminding us of the Greek
representation of Poseidon with a tiny dolphin in his hand. It has been
suggested that the broad dotted band underneath Stands for a pebbly path
along which the fishermen are Walking—a parallel to the Egyptian method
of representing boats sailing along the top of a canal. Two little curves
in the ground have been inserted beneath the feet of a, apparentiy because
his legs were drawn too short. Tlie Spaces between their heads are filled
in by groups of three pendant ' ivy leaves.'

The painting is executed in the ' black and red ' style upon the usual
white slip. Tlie fishermen are outlined in black and their bodies are filled
in with lustrous paint varying from red to brown ; the two bands round the