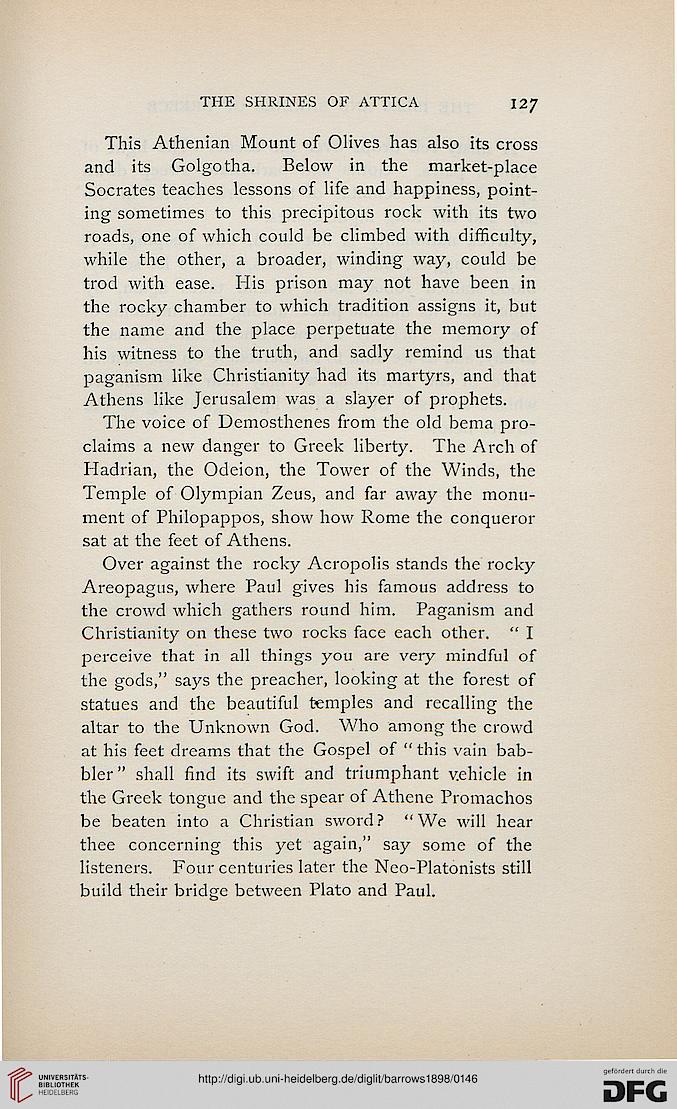 Information about OCR text
THE SHRINES OF ATTICA 127

This Athenian Mount of Olives has also its cross
and its Golgotha. Below in the market-place
Socrates teaches lessons of life and happiness, point-
ing sometimes to this precipitous rock with its two
roads, one of which could be climbed with difficulty,
while the other, a broader, winding way, could be
trod with ease. His prison may not have been in
the rocky chamber to which tradition assigns it, but
the name and the place perpetuate the memory of
his witness to the truth, and sadly remind us that
paganism like Christianity had its martyrs, and that
Athens like Jerusalem was a slayer of prophets.

The voice of Demosthenes from the old bema pro-
claims a new danger to Greek liberty. The Arch of
Hadrian, the Odeion, the Tower of the Winds, the
Temple of Olympian Zeus, and far away the monu-
ment of Philopappos, show how Rome the conqueror
sat at the feet of Athens.

Over against the rocky Acropolis stands the rocky
Areopagus, where Paul gives his famous address to
the crowd which gathers round him. Paganism and
Christianity on these two rocks face each other. " I
perceive that in all things you are very mindful of
the gods," says the preacher, looking at the forest of
statues and the beautiful temples and recalling the
altar to the Unknown God. Who among the crowd
at his feet dreams that the Gospel of " this vain bab-
bler " shall find its swift and triumphant vehicle in
the Greek tongue and the spear of Athene Promachos
be beaten into a Christian sword? "We will hear
thee concerning this yet again," say some of the
listeners. Four centuries later the Neo-Platonists still
build their bridge between Plato and Paul.