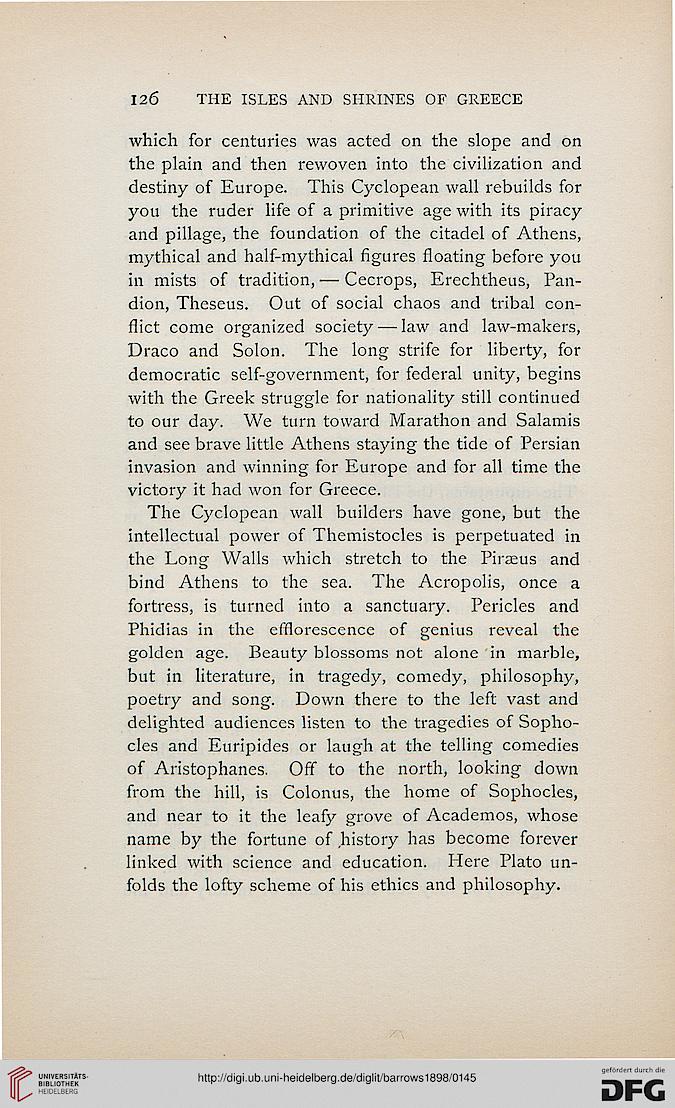 Information about OCR text
126 THE ISLES AND SHRINES OF GREECE

which for centuries was acted on the slope and on
the plain and then rewoven into the civilization and
destiny of Europe. This Cyclopean wall rebuilds for
you the ruder life of a primitive age with its piracy
and pillage, the foundation of the citadel of Athens,
mythical and half-mythical figures floating before you
in mists of tradition, — Cecrops, Erechtheus, Pan-
dion, Theseus. Out of social chaos and tribal con-
flict come organized society — law and law-makers,
Draco and Solon. The long strife for liberty, for
democratic self-government, for federal unity, begins
with the Greek struggle for nationality still continued
to our day. We turn toward Marathon and Salamis
and sec brave little Athens staying the tide of Persian
invasion and winning for Europe and for all time the
victory it had won for Greece.

The Cyclopean wall builders have gone, but the
intellectual power of Themistocles is perpetuated in
the Long Walls which stretch to the Piraeus and
bind Athens to the sea. The Acropolis, once a
fortress, is turned into a sanctuary. Pericles and
Phidias in the efflorescence of genius reveal the
golden age. Beauty blossoms not alone in marble,
but in literature, in tragedy, comedy, philosophy,
poetry and song. Down there to the left vast and
delighted audiences listen to the tragedies of Sopho-
cles and Euripides or laugh at the telling comedies
of Aristophanes. Off to the north, looking down
from the hill, is Colonus, the home of Sophocles,
and near to it the leafy grove of Academos, whose
name by the fortune of history has become forever
linked with science and education. Here Plato un-
folds the lofty scheme of his ethics and philosophy.