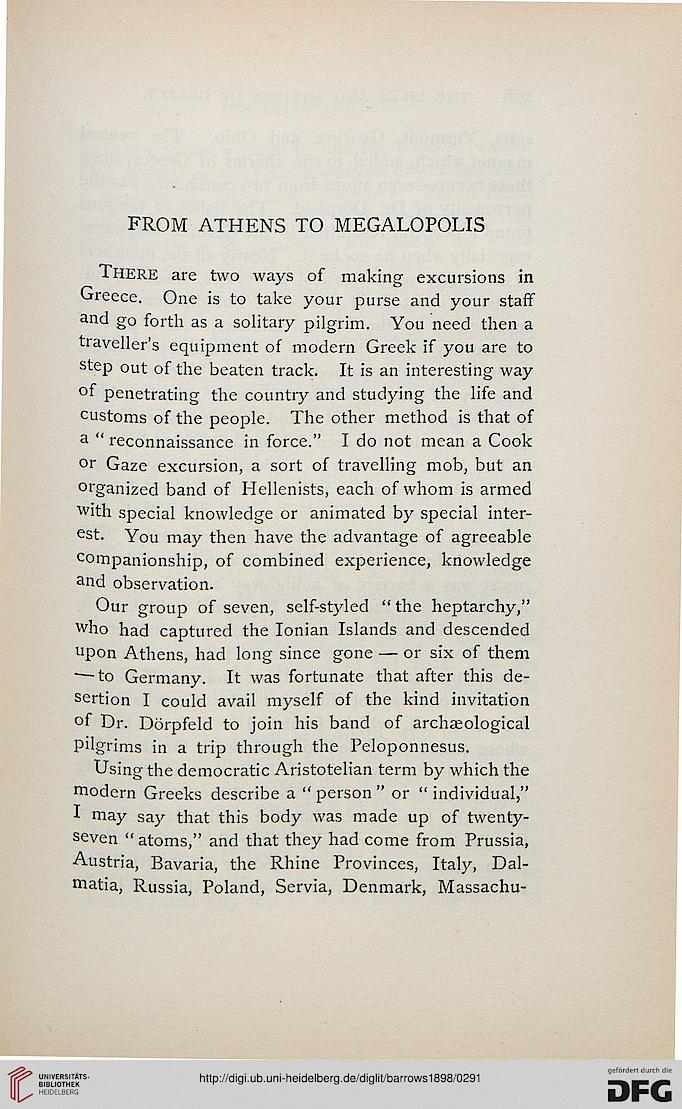 Information about OCR text
FROM ATHENS TO MEGALOPOLIS

There are two ways of making excursions in
Greece. One is to take your purse and your staff
and go forth as a solitary pilgrim. You need then a
traveller's equipment of modern Greek if you are to
step out of the beaten track. It is an interesting way
°f penetrating the country and studying the life and
customs of the people. The other method is that of
a " reconnaissance in force." I do not mean a Cook
or Gaze excursion, a sort of travelling mob, but an
organized band of Hellenists, each of whom is armed
With special knowledge or animated by special inter-
est. You may then have the advantage of agreeable
companionship, of combined experience, knowledge
a'id observation.

Our group of seven, self-styled " the heptarchy,"
who had captured the Ionian Islands and descended
upon Athens, had long since gone — or six of them
"—to Germany. It was fortunate that after this de-
sertion I could avail myself of the kind invitation
of Dr. Dorpfeld to join his band of archaeological
P'lgrims in a trip through the Peloponnesus.

Using the democratic Aristotelian term by which the
modern Greeks describe a " person " or " individual,"
I may say that this body was made up of twenty-
seven " atoms," and that they had come from Prussia,
Austria, Bavaria, the Rhine Provinces, Italy, Dal-
matia, Russia, Poland, Servia, Denmark, Massachu-