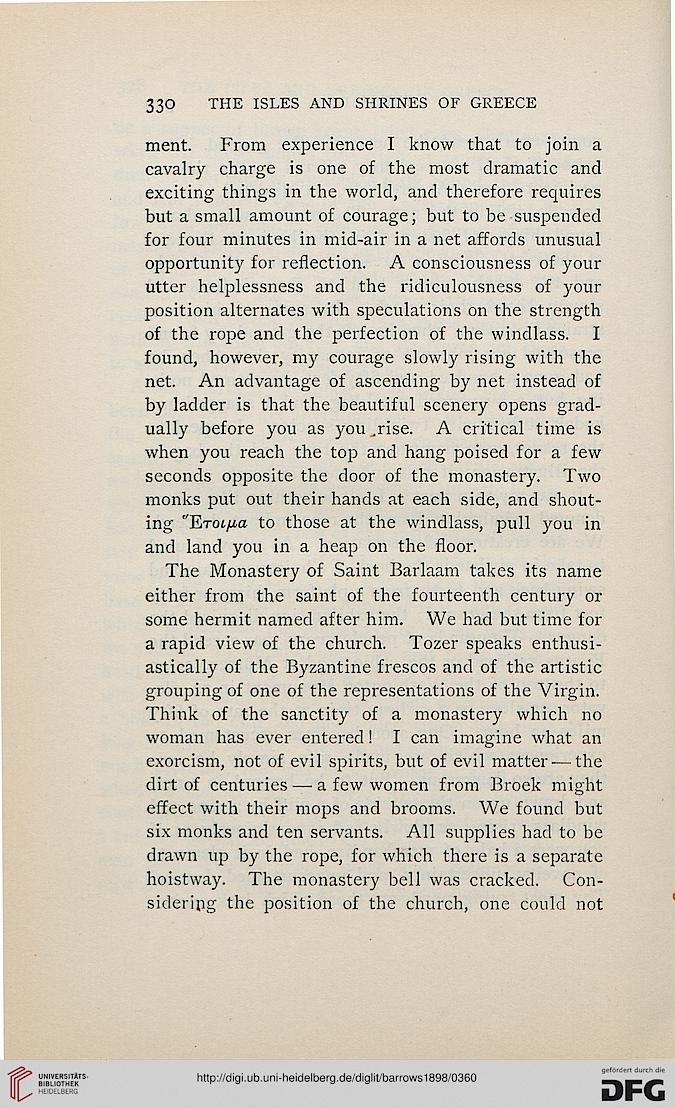 Information about OCR text
330 THE ISLES AND SHRINES OF GREECE

ment. From experience I know that to join a
cavalry charge is one of the most dramatic and
exciting things in the world, and therefore requires
but a small amount of courage; but to be suspended
for four minutes in mid-air in a net affords unusual
opportunity for reflection. A consciousness of your
utter helplessness and the ridiculousness of your
position alternates with speculations on the strength
of the rope and the perfection of the windlass. I
found, however, my courage slowly rising with the
net. An advantage of ascending by net instead of
by ladder is that the beautiful scenery opens grad-
ually before you as you .rise. A critical time is
when you reach the top and hang poised for a few
seconds opposite the door of the monastery. Two
monks put out their hands at each side, and shout-
ing "J^Toifia to those at the windlass, pull you in
and land you in a heap on the floor.

The Monastery of Saint Barlaam takes its name
either from the saint of the fourteenth century or
some hermit named after him. We had but time for
a rapid view of the church. Tozer speaks enthusi-
astically of the Byzantine frescos and of the artistic
grouping of one of the representations of the Virgin.
Think of the sanctity of a monastery which no
woman has ever entered! I can imagine what an
exorcism, not of evil spirits, but of evil matter ■—the
dirt of centuries — a few women from Brock might
effect with their mops and brooms. We found but
six monks and ten servants. All supplies had to be
drawn up by the rope, for which there is a separate
hoistvvay. The monastery bell was cracked. Con-
sidering the position of the church, one could not