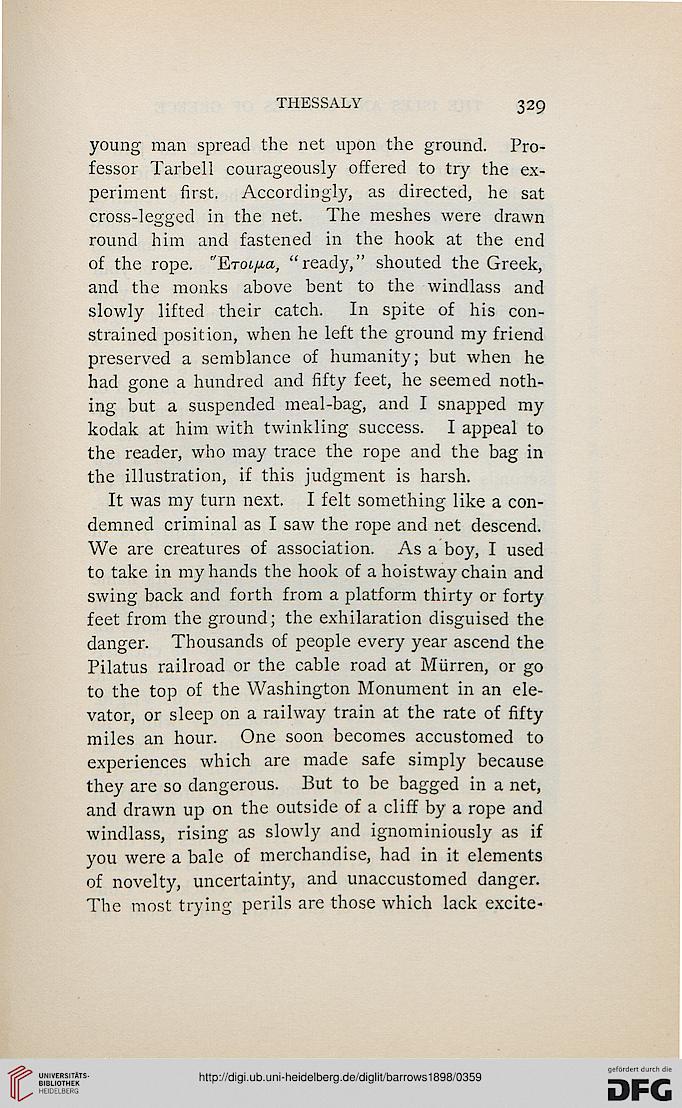 young man spread the net upon the ground. Pro-
fessor Tarbell courageously offered to try the ex-
periment first. Accordingly, as directed, he sat
cross-legged in the net. The meshes were drawn
round him and fastened in the hook at the end
of the rope. "EToipa, "ready," shouted the Greek,
and the monks above bent to the windlass and
slowly lifted their catch. In spite of his con-
strained position, when he left the ground my friend
preserved a semblance of humanity; but when he
had gone a hundred and fifty feet, he seemed noth-
ing but a suspended meal-bag, and I snapped my
kodak at him with twinkling success. I appeal to
the reader, who may trace the rope and the bag in
the illustration, if this judgment is harsh.

It was my turn next. I felt something like a con-
demned criminal as I saw the rope and net descend.
We are creatures of association. As a boy, I used
to take in my hands the hook of a hoistway chain and
swing back and forth from a platform thirty or forty
feet from the ground; the exhilaration disguised the
danger. Thousands of people every year ascend the
Pilatus railroad or the cable road at Miirren, or go
to the top of the Washington Monument in an ele-
vator, or sleep on a railway train at the rate of fifty
miles an hour. One soon becomes accustomed to
experiences which are made safe simply because
they are so dangerous. But to be bagged in a net,
and drawn up on the outside of a cliff by a rope and
windlass, rising as slowly and ignominiously as if
you were a bale of merchandise, had in it elements
of novelty, uncertainty, and unaccustomed danger.
The most trying perils are those which lack excite-