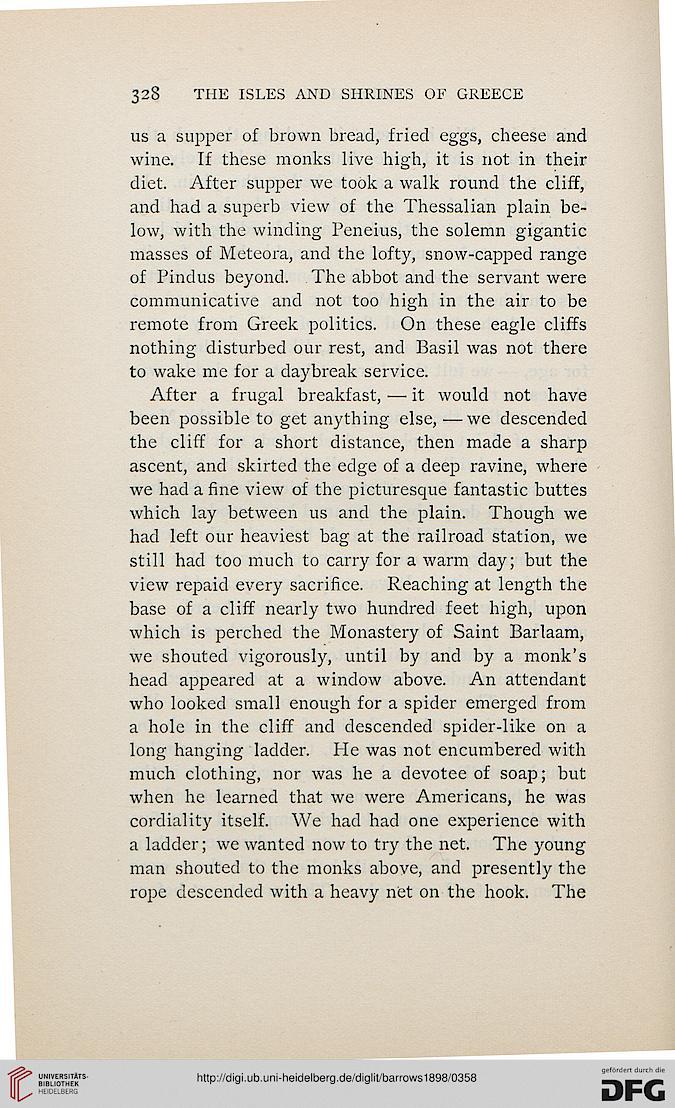 Information about OCR text
328 THE ISLES AND SHRINES OF GREECE

us a supper of brown bread, fried eggs, cheese and
wine. If these monks live high, it is not in their
diet. After supper we took a walk round the cliff,
and had a superb view of the Thessalian plain be-
low, with the winding Peneius, the solemn gigantic
masses of Meteora, and the lofty, snow-capped range
of Pindus beyond. The abbot and the servant were
communicative and not too high in the air to be
remote from Greek politics. On these eagle cliffs
nothing disturbed our rest, and Basil was not there
to wake me for a daybreak service.

After a frugal breakfast, — it would not have
been possible to get anything else, —we descended
the cliff for a short distance, then made a sharp
ascent, and skirted the edge of a deep ravine, where
we had a fine view of the picturesque fantastic buttes
which lay between us and the plain. Though we
had left our heaviest bag at the railroad station, we
still had too much to carry for a warm clay; but the
view repaid every sacrifice. Reaching at length the
base of a cliff nearly two hundred feet high, upon
which is perched the Monastery of Saint Barlaam,
we shouted vigorously, until by and by a monk's
head appeared at a window above. An attendant
who looked small enough for a spider emerged from
a hole in the cliff and descended spider-like on a
long hanging ladder. He was not encumbered with
much clothing, nor was he a devotee of soap; but
when he learned that we were Americans, he was
cordiality itself. We had had one experience with
a ladder; we wanted now to try the net. The young
man shouted to the monks above, and presently the
rope descended with a heavy net on the hook. The