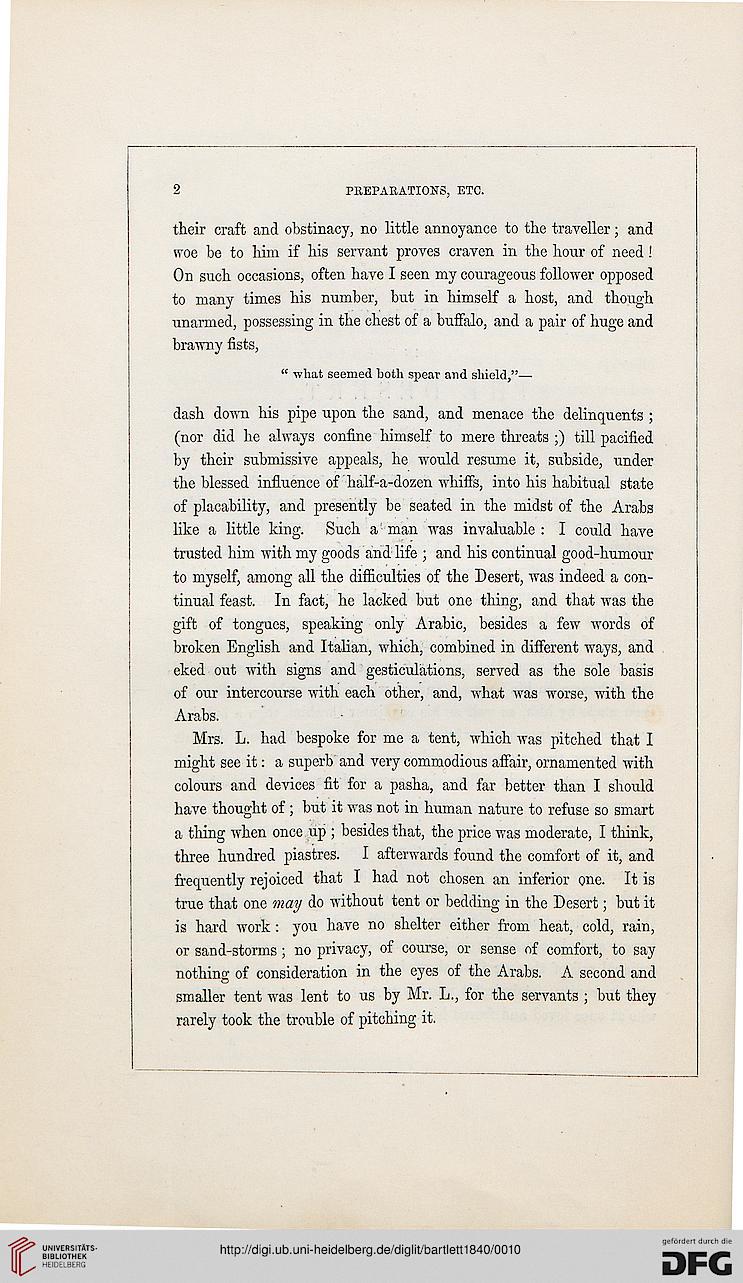 their craft and obstinacy, no little annoyance to the traveller; and
woe be to him if his servant proves craven in the hour of need !
On such occasions, often have I seen my courageous follower opposed
to many times his number, but in himself a host, and though
unarmed, possessing in the chest of a buffalo, and a pair of huge and
brawny fists,

" what seemed both spear and shield,"—

dash down his pipe upon the sand, and menace the delinquents ;
(nor did he always confine himself to mere threats ;) till pacified
by their submissive appeals, he would resume it, subside, under
the blessed influence of half-a-dozen whiffs, into his habitual state
of placability, and presently be seated in the midst of the Arabs
like a little king. Such a: man was invaluable: I could have
trusted him with my goods and life ; and his continual good-humour
to myself, among all the difficulties of the Desert, was indeed a con-
tinual feast. In fact, he lacked but one thing, and that was the
gift of tongues, speaking only Arabic, besides a few words of
broken English and Italian, which, combined in different ways, and
eked out with signs and gesticulations, served as the sole basis
of our intercourse with each other, and, what was worse, with the
Arabs.

Mrs. L. had bespoke for me a tent, which was pitched that I
might see it: a superb and very commodious affair, ornamented with
colours and devices fit for a pasha, and far better than I should
have thought of ; but it was not in human nature to refuse so smart
a thing when once up ; besides that, the price was moderate, I think,
three hundred piastres. I afterwards found the comfort of it, and
frequently rejoiced that I had not chosen an inferior one. It is
true that one may do without tent or bedding in the Desert; but it
is hard work : you have no shelter either from heat, cold, rain,
or sand-storms; no privacy, of course, or sense of comfort, to say
nothing of consideration in the eyes of the Arabs. A second and
smaller tent was lent to us by Mr. L., for the servants ; but they
rarely took the trouble of pitching it.