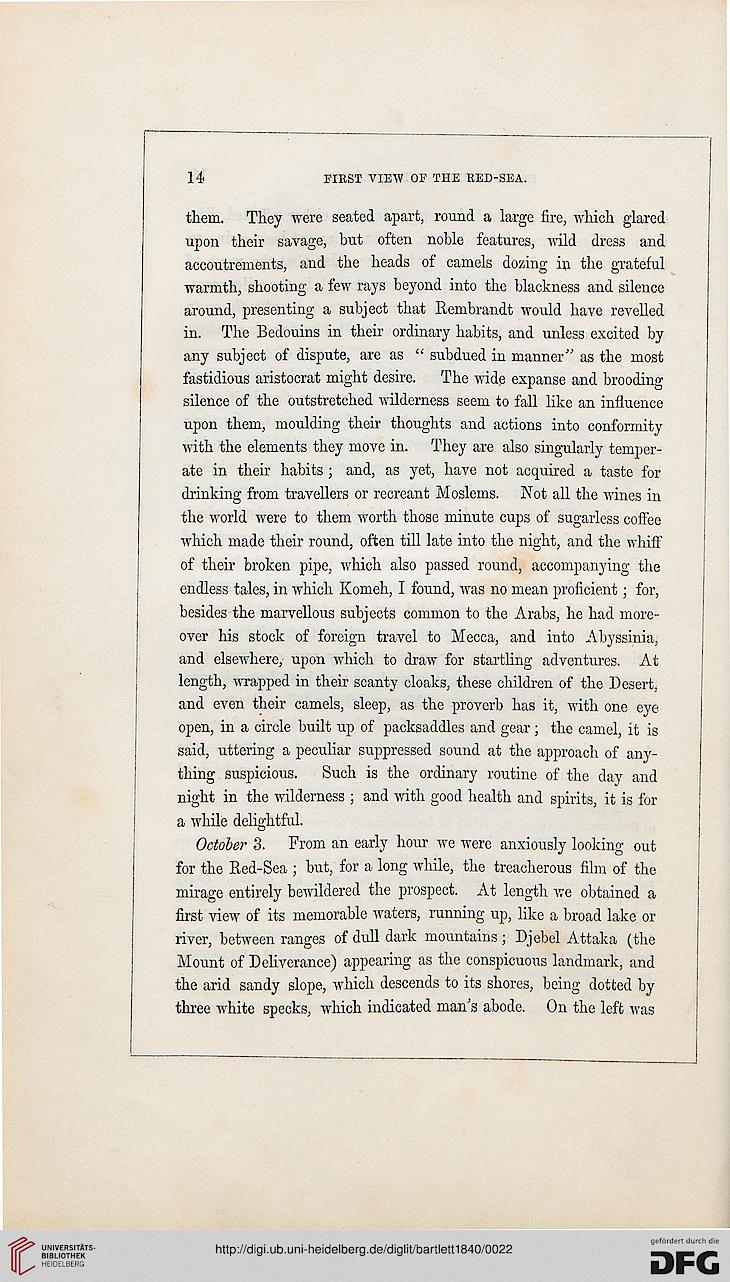 Information about OCR text
14 FIRST VIEW OF THE RED-SEA.

them. They were seated apart, round a large fire, which glared
upon their savage, but often noble features, wild dress and
accoutrements, and the heads of camels dozing in the grateful
warmth, shooting a few rays beyond into the blackness and silence
around, presenting a subject that Rembrandt would have revelled
in. The Bedouins in their ordinary habits, and unless excited by
any subject of dispute, are as " subdued in manner" as the most
fastidious aristocrat might desire. The wide expanse and brooding
silence of the outstretched wilderness seem to fall like an influence
upon them, moulding their thoughts and actions into conformity
with the elements they move in. They are also singularly temper-
ate in their habits ; and, as yet, have not acquired a taste for
drinking from travellers or recreant Moslems. Not all the wines in
the world were to them worth those minute cups of sugarless coffee
which made their round, often till late into the night, and the whiff
of their broken pipe, which also passed round, accompanying the
endless tales, in which Komeh, I found, was no mean proficient; for,
besides the marvellous subjects common to the Arabs, he had more-
over his stock of foreign travel to Mecca, and into Abyssinia,
and elsewhere, upon which to draw for startling adventures. At
length, wrapped in their scanty cloaks, these children of the Desert,
and even their camels, sleep, as the proverb has it, with one eye
open, in a circle built up of packsaddles and gear; the camel, it is
said, uttering a peculiar suppressed sound at the approach of any-
thing suspicious. Such is the ordinary routine of the day and
night in the wilderness ; and with good health and spirits, it is for
a while delightful.

October 3. From an early hour we were anxiously looking out
for the Red-Sea ; but, for a long while, the treacherous film of the
mirage entirely bewildered the prospect. At length we obtained a
first view of its memorable waters, running up, like a broad lake or
river, between ranges of dull dark mountains ; Djebel Attaka (the
Mount of Deliverance) appearing as the conspicuous landmark, and
the arid sandy slope, which descends to its shores, being dotted by
three white specks, which indicated man's abode. On the left was