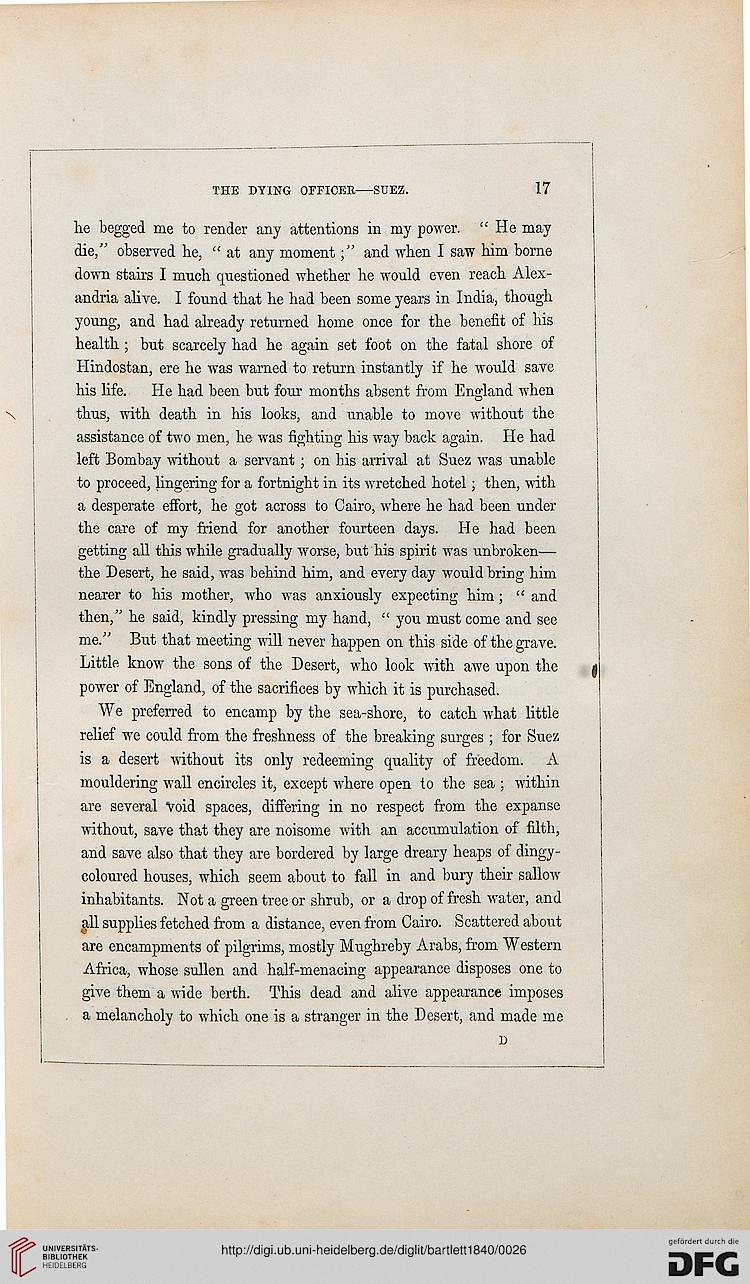 he begged me to render any attentions in my power. " He may
die," observed he, " at any moment;" and when I saw him borne
down stairs I much questioned whether lie would even reach Alex-
andria alive. I found that he had been some years in India, though
young, and had already returned home once for the benefit of his
health ; but scarcely had he again set foot on the fatal shore of
Hindostan, ere he was warned to return instantly if he would save
his life. He had been but four months absent from England when
thus, with death in his looks, and unable to move without the
assistance of two men, he was fighting his way back again. lie had
left Bombay without a servant ; on bis arrival at Suez was unable
to proceed, lingering for a fortnight in its wretched hotel; then, with
a desperate effort, he got across to Cairo, where he had been under
the care of my friend for another fourteen days. He had been
getting all this while gradually worse, but his spirit was unbroken—
the Desert, he said, was behind him, and every day would bring him
nearer to his mother, who was anxiously expecting him ; " and
then," he said, kindly pressing my hand, " you must come and see
me." But that meeting will never happen on this side of the grave.
Little know the sons of the Desert, who look with awe upon the
power of England, of the sacrifices by which it is purchased.

We preferred to encamp by the sea-shore, to catch what little
relief we could from the freshness of the breaking surges ; for Suez
is a desert without its only redeeming quality of freedom. A
mouldering wall encircles it, except where open to the sea ; within
are several Void spaces, differing in no respect from the expanse
without, save that they are noisome with an accumulation of filth,
and save also that they are bordered by large dreary heaps of dingy-
coloured houses, which seem about to fall in and bury their sallow
inhabitants. Not a green tree or shrub, or a drop of fresh water, and
all supplies fetched from a distance, even from Cairo. Scattered about
are encampments of pilgrims, mostly Mughreby Arabs, from Western
Africa, whose sullen and half-menacing appearance disposes one to
give them a wide berth. This dead and alive appearance imposes
a melancholy to which one is a stranger in the Desert, and made me