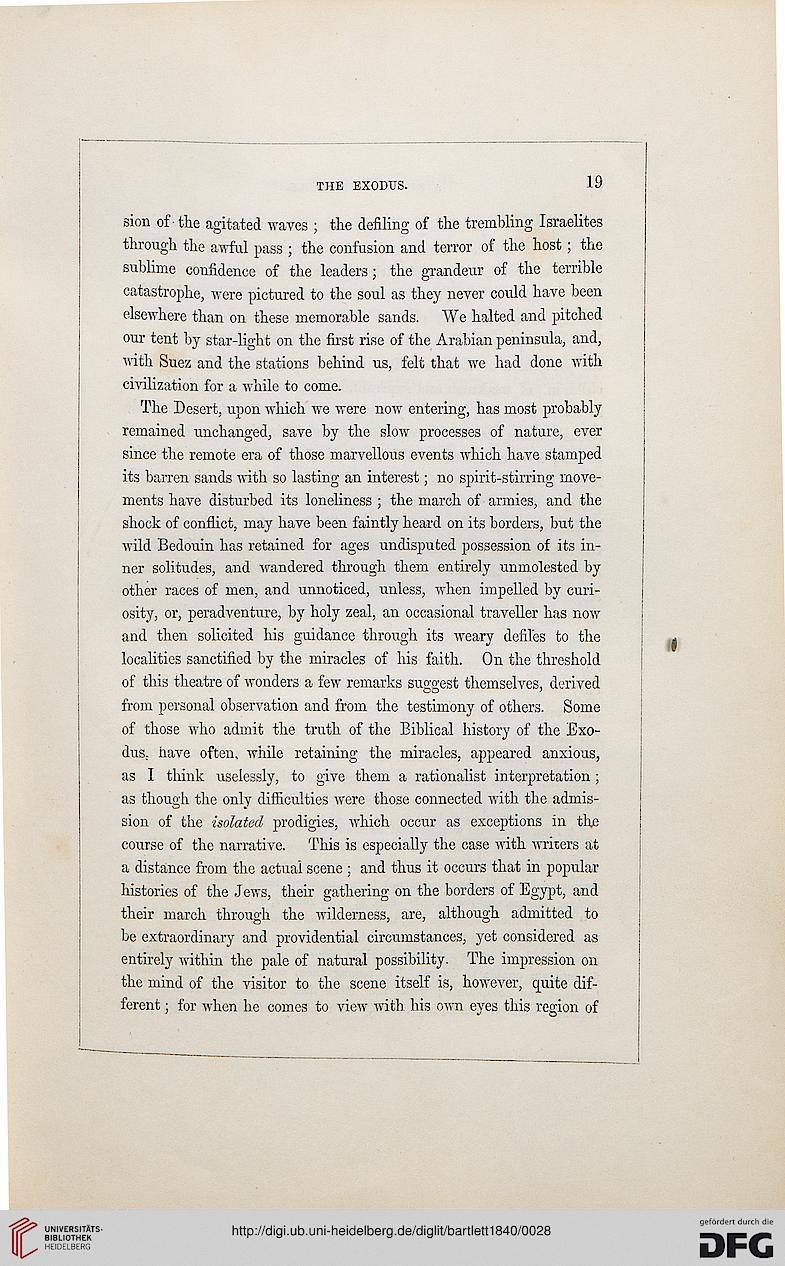 Information about OCR text
THE EXODUS.

sion of the agitated waves; the defiling of the trembling Israelites
through the awful pass ; the confusion and terror of the host; the
sublime confidence of the leaders; the grandeur of the terrible
catastrophe, were pictured to the soul as they never could have been
elsewhere than on these memorable sands. We halted and pitched
our tent by star-light on the first rise of the Arabian peninsula, and,
with Suez and the stations behind us, felt that we had done with
civilization for a while to come.

The Desert, upon which we were now entering, has most probably
remained unchanged, save by the slow processes of nature, ever
since the remote era of those marvellous events which have stamped
its barren sands with so lasting an interest; no spirit-stirring move-
ments have disturbed its loneliness ; the march of armies, and the
shock of conflict, may have been faintly heard on its borders, but the
wild Bedouin has retained for ages undisputed possession of its in-
ner solitudes, and wandered through them entirely unmolested by
other races of men, and unnoticed, unless, when impelled by curi-
osity, or, peradventure, by holy zeal, an occasional traveller has now
and then solicited his guidance through its weary defiles to the
localities sanctified by the miracles of his faith. On the threshold
of this theatre of wonders a few remarks suggest themselves, derived
from personal observation and from the testimony of others. Some
of those who admit the truth of the Biblical history of the Exo-
dus, have often, while retaining the miracles, appeared anxious,
as I think uselessly, to give them a rationalist interpretation ;
as though the only difficulties were those connected with the admis-
sion of the isolated jjrodigies, which occur as exceptions in the
course of the narrative. This is especially the case with writers at
a distance from the actual scene ; and thus it occurs that in popular
histories of the Jews, their gathering on the borders of Egypt, and
their march through the wilderness, are, although admitted to
be extraordinary and providential circumstances, yet considered as
entirely within the pale of natural possibility. The impression on
the mind of the visitor to the scene itself is, however, quite dif-
ferent ; for when he comes to view with his own eyes this region of