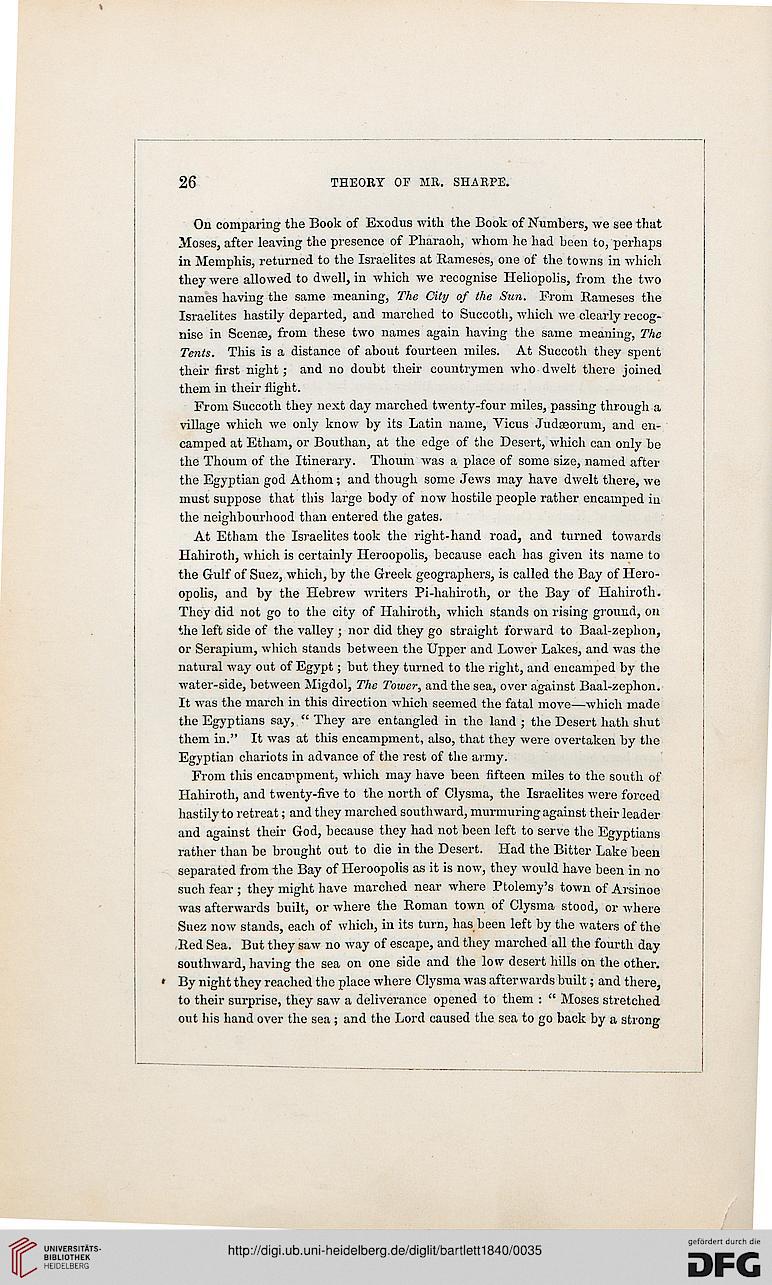 On comparing the Book of Exodus with the Book of Numbers, we see that
Moses, after leaving the presence of Pharaoh, whom lie had been to, perhaps
in Memphis, returned to the Israelites at Rameses, one of the towns in which
they were allowed to dwell, in which we recognise Heliopolis, from the two
names having the same meaning, The City of the Sun. From Rameses the
Israelites hastily departed, and marched to Succoth, which we clearly recog-
nise in Scena3, from these two names again having the same meaning-, The
Tents. This is a distance of about fourteen miles. At Succoth they spent
their first night; and no doubt their countrymen who dwelt there joined
them in their flight.

From Succoth they next day marched twenty-four miles, passing through a
village which we only know by its Latin name, Vicus Judaaorum, and en-
camped at Etham, or Bouthan, at the edge of the Desert, which can only he
the Thoum of the Itinerary. Thoum was a place of some size, named after
the Egyptian god Athom; and though some Jews may have dwelt there, we
must suppose that this large body of now hostile people rather encamped iu
the neighbourhood than entered the gates.

At Etham the Israelites took the right-hand road, and turned towards
Hahiroth, which is certainly Heroopolis, because each has given its name to
the Gulf of Suez, which, by the Greek geographers, is called the Bay of Hero-
opolis, and by the Hebrew writers Pi-hahiroth, or the Bay of Hahiroth.
They did not go to the city of Hahiroth, which stands on rising ground, on
the left side of the valley ; nor did they go straight forward to Baal-zephon,
or Serapium, which stands between the Upper and Lower Lakes, and was the
natural way out of Egypt; but they turned to the right, and encamped by the
water-side, between Migdol, The Tower, and the sea, over against Baal-zephon.
It was the march in this direction which seemed the fatal move—which made
the Egyptians say, " They are entangled in the land ; the Desert hath shut
them in." It was at this encampment, also, that they were overtaken by the
Egyptian chariots in advance of the rest of the army.

From this encampment, which may have been fifteen miles to the south of
Hahiroth, and twenty-five to the north of Clysma, the Israelites were forced
hastily to retreat; and they marched southward, murmuring against their leader
and against their God, because they had not been left to serve the Egyptians
rather than be brought out to die in the Desert. Had the Bitter Lake been
separated from the Bay of Heroopolis as it is now, they would have been in no
such fear ; they might have marched near where Ptolemy's town of Arsinoe
was afterwards built, or where the Roman town of Clysma stood, or where
Suez now stands, each of which, in its turn, has been left by the waters of the
Red Sea. But they saw no way of escape, and they marched all the fourth day
southward, having the sea on one side and the low desert hills on the other.
By night they reached the place where Clysma was afterwards built; and there,
to their surprise, they saw a deliverance opened to them : " Moses stretched
out his hand over the sea; and the Lord caused the sea to go back by a strong