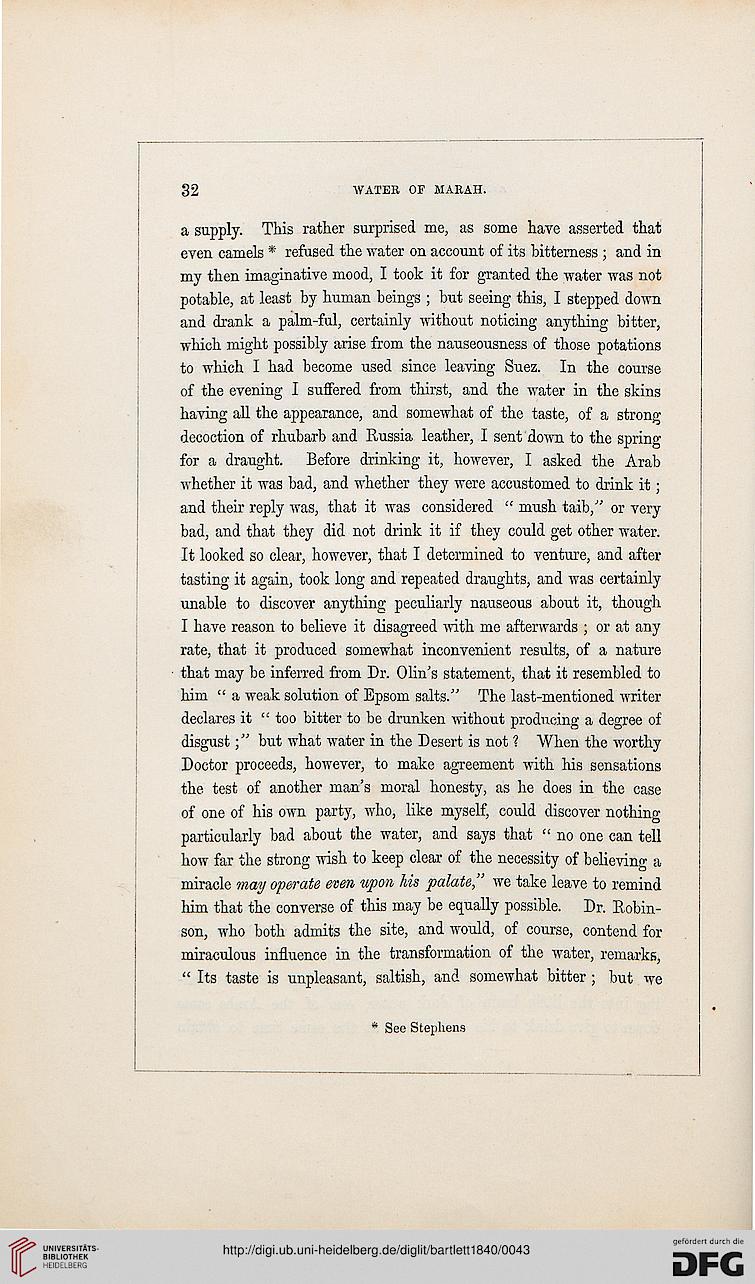 a supply. This rather surprised me, as some have asserted that
even camels * refused the water on account of its bitterness ; and in
my then imaginative mood, I took it for granted the water was not
potable, at least by human beings ; but seeing this, I stepped down
and drank a palm-ful, certainly without noticing anything bitter,
which might possibly arise from the nauseousness of those potations
to which I had become used since leaving Suez. In the course
of the evening I suffered from thirst, and the water in the skins
having all the appearance, and somewhat of the taste, of a strong
decoction of rhubarb and Russia leather, I sent down to the spring
for a draught. Before drinking it, however, I asked the Arab
whether it was bad, and whether they were accustomed to drink it;
and their reply was, that it was considered " mush taib," or very
bad, and that they did not drink it if they could get other water.
It looked so clear, however, that I determined to venture, and after
tasting it again, took long and repeated draughts, and was certainly
unable to discover anything peculiarly nauseous about it, though
I have reason to believe it disagreed with me afterwards ; or at any
rate, that it produced somewhat inconvenient results, of a nature
that may be inferred from Dr. Olin's statement, that it resembled to
him " a weak solution of Epsom salts." The last-mentioned writer
declares it " too bitter to be drunken without producing a degree of
disgust;" but what water in the Desert is not ? "When the worthy
Doctor proceeds, however, to make agreement with his sensations
the test of another man's moral honesty, as he does in the case
of one of his own party, who, like myself, could discover nothing
particularly bad about the water, and says that " no one can tell
how far the strong wish to keep clear of the necessity of believing a
miracle may operate even upon his palate," we take leave to remind
him that the converse of this may be equally possible. Dr. Robin-
son, who both admits the site, and would, of course, contend for
miraculous influence in the transformation of the water, remarks,
" Its taste is unpleasant, saltish, and somewhat bitter; but we