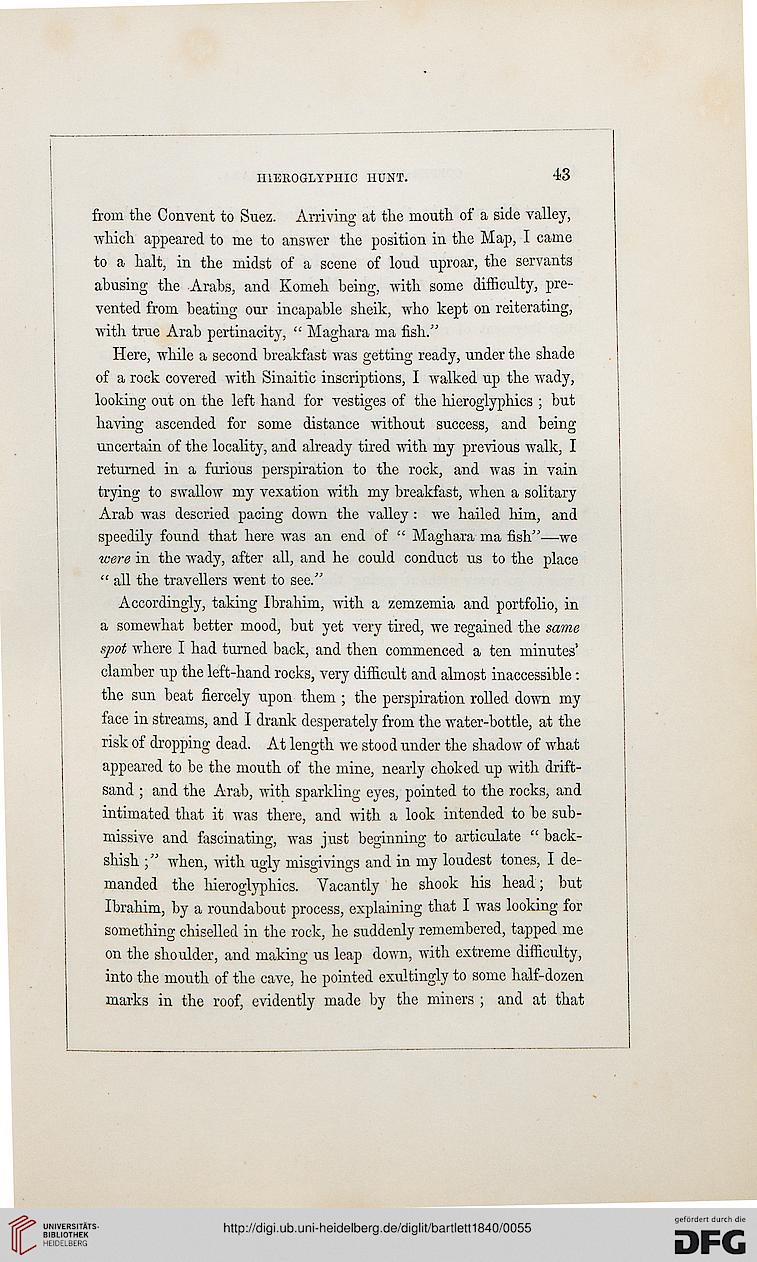 from the Convent to Suez. Arriving at the mouth of a side valley,
■which appeared to me to answer the position in the Map, I came
to a halt, in the midst of a scene of loud uproar, the servants
abusing the Arabs, and Komeh being, with some difficulty, pre-
vented from beating our incapable sheik, who kept on reiterating,
with true Arab pertinacity, " Maghara ma fish."

Here, while a second breakfast was getting ready, under the shade
of a rock covered with Sinaitic inscriptions, I walked up the wady,
looking out on the left hand for vestiges of the hieroglyphics ; but
having ascended for some distance without success, and being-
uncertain of the locality, and already tired with my previous walk, I
returned in a furious perspiration to the rock, and was in vain
trying to swallow my vexation with my breakfast, when a solitary
Arab wras descried pacing down the valley : we hailed him, and
speedily found that here was an end of " Maghara ma fish"—we
were in the wady, after all, and he could conduct us to the place
" all the travellers went to see."

Accordingly, taking Ibrahim, with a zemzemia and portfolio, in
a somewhat better mood, but yet very tired, we regained the same
spot where I had turned back, and then commenced a ten minutes'
clamber up the left-hand rocks, very difficult and almost inaccessible:
the sun beat fiercely upon them ; the perspiration rolled down my
face in streams, and I drank desperately from the water-bottle, at the
risk of dropping dead. At length we stood under the shadow of what
appeared to be the mouth of the mine, nearly choked up with drift-
sand ; and the Arab, with sparkling eyes, pointed to the rocks, and
intimated that it was there, and with a look intended to be sub-
missive and fascinating, was just beginning to articulate " back-
shish ;" when, with ugly misgivings and in my loudest tones, I de-
manded the hieroglyphics. Vacantly he shook his head; but
Ibrahim, by a roundabout process, explaining that I was looking for
something chiselled in the rock, he suddenly remembered, tapped me
on the shoulder, and making us leap down, with extreme difficulty,
into the mouth of the cave, he pointed exultingly to some half-dozen
marks in the roof, evidently made by the miners ; and at that