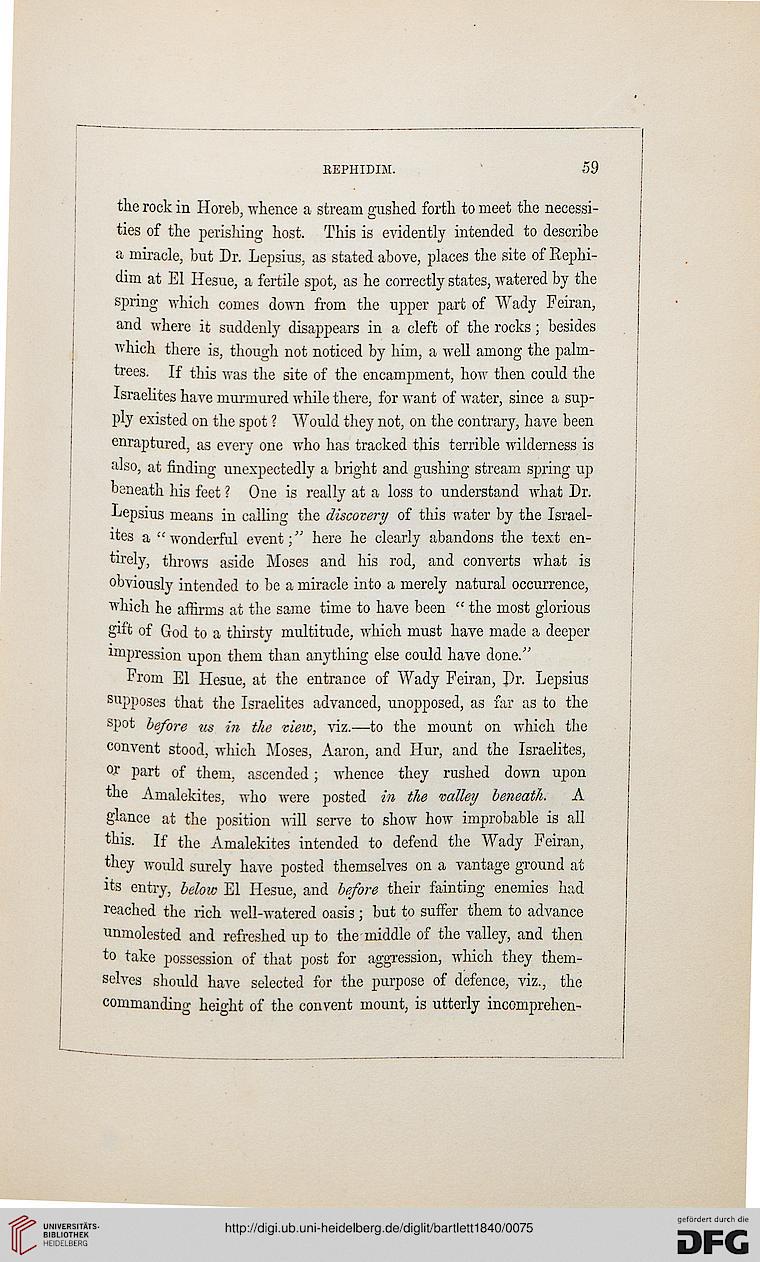 the rock in Horeb, whence a stream gushed forth to meet the necessi-
ties of the perishing host. This is evidently intended to describe
a miracle, but Dr. Lepsius, as stated above, places the site of Eephi-
dim at El Hesue, a fertile spot, as he correctly states, watered by the
spring which comes down from the upper part of Wady Feiran,
and where it suddenly disappears in a cleft of the rocks; besides
which there is, though not noticed by him, a well among the palm-
trees. If this was the site of the encampment, how then could the
Israelites have nmmiured while there, for want of water, since a sup-
ply existed on the spot ? Would they not, on the contrary, have been
enraptured, as every one who has tracked this terrible wilderness is
also, at finding unexpectedly a bright and gushing stream spring up
beneath his feet ? One is really at a loss to understand what Dr.
Lepsius means in calling the discovery of this water by the Israel-
ites a "wonderful event;" here he clearly abandons the text en-
tirely, throws aside Moses and his rod, and converts what is
obviously intended to be a miracle into a merely natural occurrence,
which he affirms at the same time to have been " the most glorious
gift of God to a thirsty multitude, which must have made a deeper
impression upon them than anything else could have done."

From El Hesue, at the entrance of Wady Feiran, Dr. Lepsius
supposes that the Israelites advanced, unopposed, as far as to the
spot before us in the view, viz.—to the mount on which the
convent stood, which Moses, Aaron, and Hur, and the Israelites,
or part of them, ascended; whence they rushed down upon
the Amalekites, who were posted in the valley beneath. A
glance at the position will serve to show how improbable is all
this. If the Amalekites intended to defend the Wady Feiran,
they would surely have posted themselves on a vantage ground at
its entry, below El Hesue, and before their fainting enemies had
reached the rich well-watered oasis ; but to suffer them to advance
unmolested and refreshed up to the middle of the valley, and then
to take possession of that post for aggression, which they them-
selves should have selected for the purpose of defence, viz., the
commanding height of the convent mount, is utterly incomprehen-