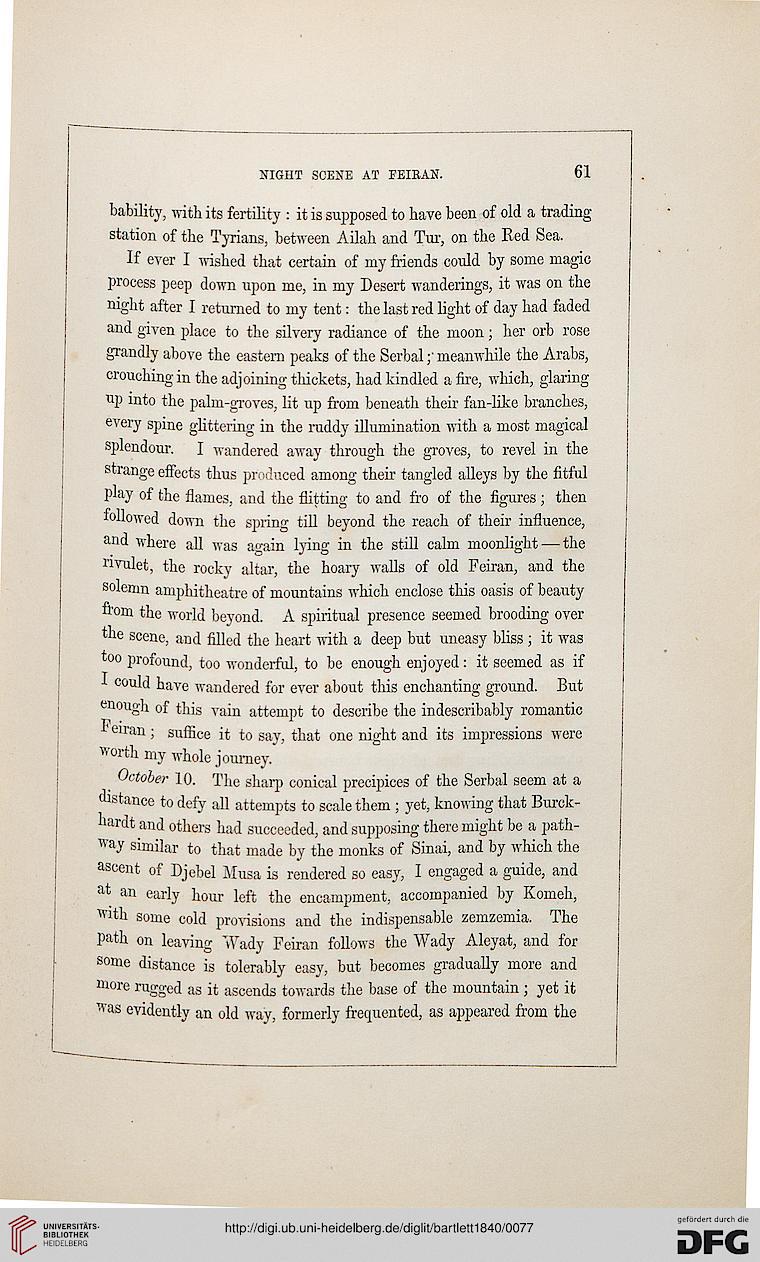 bability, with its fertility : it is supposed to have been of old a trading
station of the Tyrians, between Ailah and Tur, on the Red Sea.

If ever I wished that certain of my friends could by some magic
process peep down upon me, in my Desert wanderings, it was on the
night after I returned to my tent: the last red light of day had faded
and given place to the silvery radiance of the moon; her orb rose
grandly above the eastern peaks of the Serbal;' meanwhile the Arabs,
crouching in the adjoining thickets, had kindled a fire, which, glaring
up into the palm-groves, lit up from beneath their fan-like branches,
every spine glittering in the ruddy illumination with a most magical
splendour. I wandered away through the groves, to revel in the
strange effects thus pri duced among their tangled alleys by the fitful
play of the flames, and the flitting to and fro of the figures ; then
followed down the spring till beyond the reach of their influence,
and where all was again lying in the still calm moonlight — the
nvulet, the rocky altar, the hoary walls of old Feiran, and the
solemn amphitheatre of mountains which enclose this oasis of beauty
from the world beyond. A spiritual presence seemed brooding over
the scene, and filled the heart with a deep but uneasy bliss ; it was
wo profound, too wonderful, to be enough enjoyed: it seemed as if
c°uld have wandered for ever about this enchanting ground. But
enough of this vain attempt to describe the indescribably romantic
■ eiran; suffice it to say, that one night and its impressions were
worth my whole journey.

October 10. The sharp conical precipices of the Serbal seem at a
distance to defy all attempts to scale them; yet, knowing that Burck-
bardt and others had succeeded, and supposing there might be a path-
way similar to that made by the monks of Sinai, and by which the
ascent of Djebel Musa is rendered so easy, I engaged a guide, and
at an early hour left the encampment, accompanied by Komeh,
with some cold provisions and the indispensable zemzemia. The
path on leaving Wady Feiran follows the Wady Aleyat, and for
some distance is tolerably easy, but becomes gradually more and
more rugged as it ascends towards the base of the mountain ; yet it
was evidently an old way, formerly frequented, as appeared from the