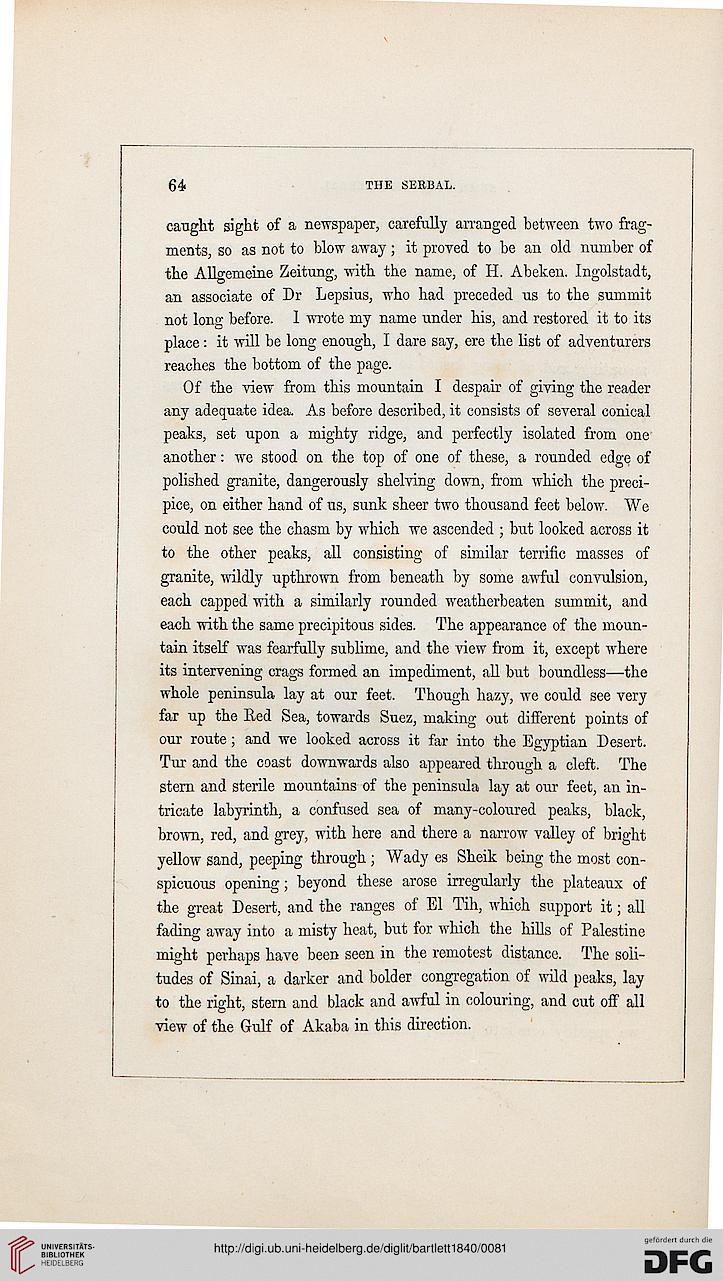 Information about OCR text
64 THE SEEBAL.

caught sight of a newspaper, carefully arranged between two frag-
ments, so as not to blow away ; it proved to be an old number of
the Allgcmeine Zeitung, with the name, of H. Abeken. Ingolstadt,
an associate of Dr Lepsius, who had preceded us to the summit
not Ion"' before. 1 wrote my name under his, and restored it to its
place : it will be long enough, I dare say, ere the list of adventurers
reaches the bottom of the page.

Of the view from this mountain I despair of giving the reader
any adequate idea. As before described, it consists of several conical
peaks, set upon a mighty ridge, and perfectly isolated from one
another: we stood on the top of one of these, a rounded edge of
polished granite, dangerously shelving down, from which the preci-
pice, on either hand of us, sunk sheer two thousand feet below. We
could not see the chasm by which we ascended ; but looked across it
to the other peaks, all consisting of similar terrific masses of
granite, wildly upthrown from beneath by some awful convulsion,
each capped with a similarly rounded weatherbeaten summit, and
each with the same precipitous sides. The appearance of the moun-
tain itself was fearfully sublime, and the view from it, except where
its intervening crags formed an impediment, all but boundless—the
whole peninsula lay at our feet. Though hazy, we could see very
far up the Red Sea, towards Suez, making out different points of
our route; and we looked across it far into the Egyptian Desert.
Tur and the coast downwards also appeared through a cleft. The
stern and sterile mountains of the peninsula lay at our feet, an in-
tricate labyrinth, a confused sea of many-coloured peaks, black,
brown, red, and grey, with here and there a narrow valley of bright
yellow sand, peeping through ; Wady es Sheik being the most con-
spicuous opening; beyond these arose irregularly the plateaux of
the great Desert, and the ranges of El Tih, which support it; all
fadincr away into a misty heat, but for which the hills of Palestine
might perhaps have been seen in the remotest distance. The soli-
tudes of Sinai, a darker and bolder congregation of wild peaks, lay
to the right, stern and black and awful in colouring, and cut off all
view of the Gulf of Akaba in this direction.