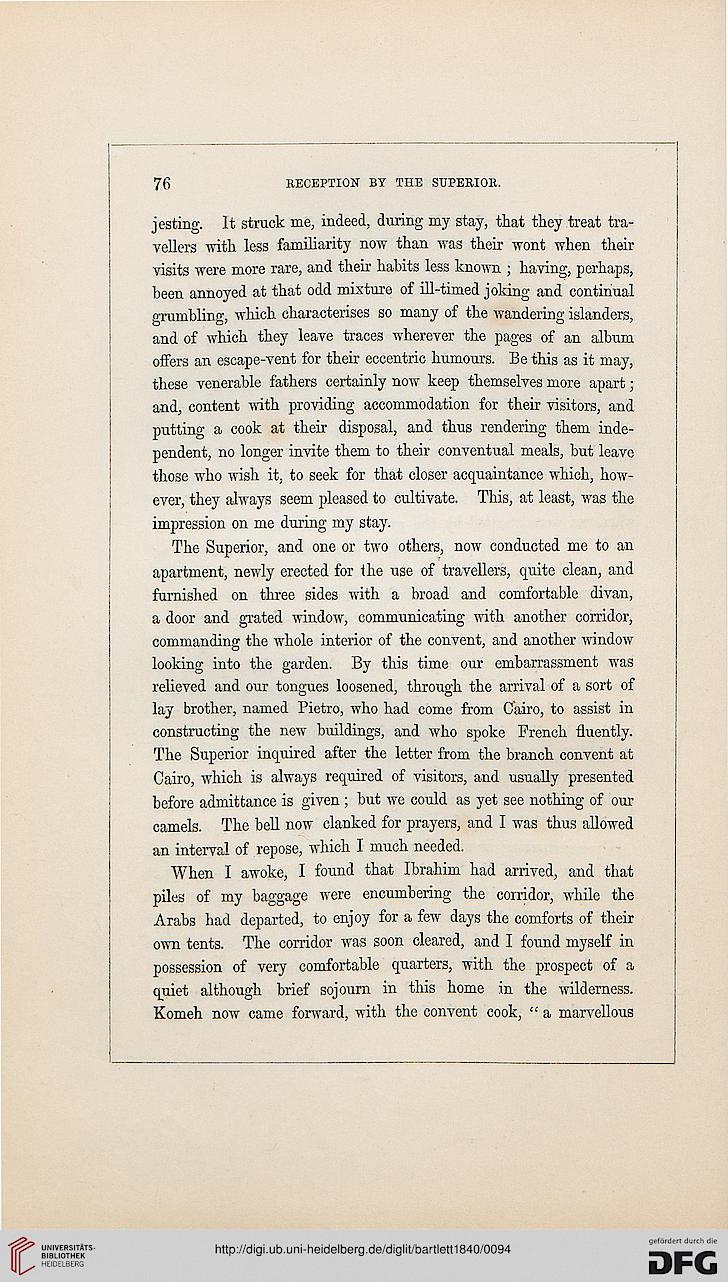 Information about OCR text
76 RECEPTION BY THE SUPERIOR.

jesting. It struck me, indeed, during my stay, that they treat tra-
vellers with less familiarity now than was their wont when their
visits were more rare, and their habits less known ; having, perhaps,
been annoyed at that odd mixture of ill-timed joking and continual
grumbling, which characterises so many of the wandering islanders,
and of which they leave traces wherever the pages of an album
offers an escape-vent for their eccentric humours. Be this as it may,
these venerable fathers certainly now keep themselves more apart;
and, content with providing accommodation for their visitors, and
putting a cook at then- disposal, and thus rendering them inde-
pendent, no longer invite them to their conventual meals, but leave
those who wish it, to seek for that closer acquaintance which, how-
ever, they always seem pleased to cultivate. This, at least, was the
impression on me during my stay.

The Superior, and one or two others, now conducted me to an
apartment, newly erected for the use of travellers, quite clean, and
furnished on three sides with a broad and comfortable divan,
a door and grated window, communicating with another corridor,
commanding the whole interior of the convent, and another window
looking into the garden. By this time our embarrassment was
relieved and our tongues loosened, through the arrival of a sort of
lay brother, named Pietro, who had come from Cairo, to assist in
constructing the new buildings, and who spoke French fluently.
The Superior inquired after the letter from the branch convent at
Cairo, which is always required of visitors, and usually presented
before admittance is given ; but we could as yet see nothing of our
camels. The bell now clanked for prayers, and I was thus allowed
an interval of repose, which I much needed.

When I awoke, I found that Ibrahim had arrived, and that
piles of my baggage were encumbering the corridor, while the
Arabs had departed, to enjoy for a few days the comforts of their
own tents. The corridor was soon cleared, and I found myself in
possession of very comfortable quarters, with the prospect of a
quiet although brief sojourn in this home in the wilderness.
Komeh now came forward, with the convent cook, " a marvellous