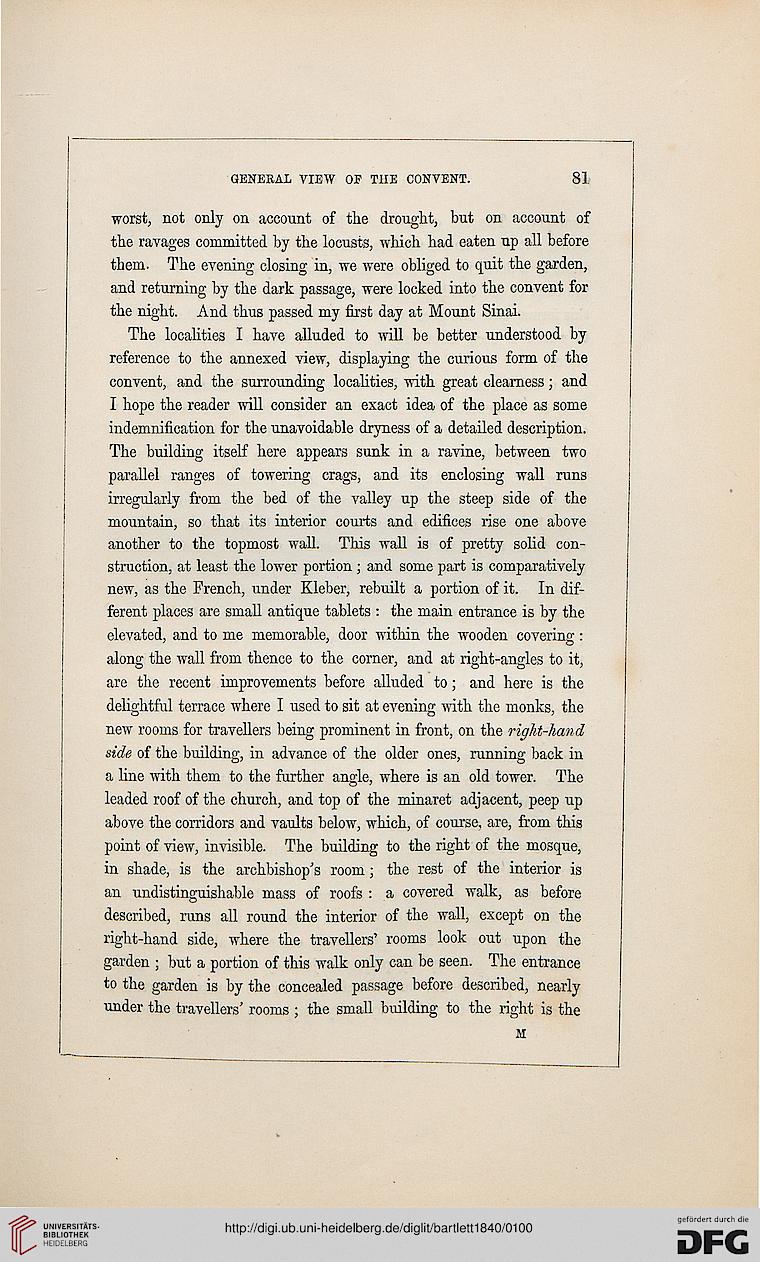 worst, not only on account of the drought, but on account of
the ravages committed by the locusts, which had eaten up all before
them. The evening closing in, we were obliged to quit the garden,
and returning by the dark passage, were locked into the convent for
the night. And thus passed my first day at Mount Sinai.

The localities I have alluded to will be better understood by
reference to the annexed view, displaying the curious form of the
convent, and the surrounding localities, with great clearness; and
I hope the reader will consider an exact idea of the place as some
indemnification for the unavoidable dryness of a detailed description.
The building itself here appears sunk in a ravine, between two
parallel ranges of towering crags, and its enclosing wall runs
irregularly from the bed of the valley up the steep side of the
mountain, so that its interior courts and edifices rise one above
another to the topmost wall. This wall is of pretty solid con-
struction, at least the lower portion ; and some part is comparatively
new, as the French, under Kleber, rebuilt a portion of it. In dif-
ferent places are small antique tablets : the main entrance is by the
elevated, and to me memorable, door within the wooden covering:
alone; the wall from thence to the corner, and at right-angles to it,
are the recent improvements before alluded to; and here is the
delightful terrace where I used to sit at evening with the monks, the
new rooms for travellers being prominent in front, on the right-hand
side of the building, in advance of the older ones, running back in
a line with them to the further angle, where is an old tower. The
leaded roof of the church, and top of the minaret adjacent, peep up
above the corridors and vaults below, which, of course, are, from this
point of view, invisible. The building to the right of the mosque,
in shade, is the archbishop's room ; the rest of the interior is
an undistinguishable mass of roofs : a covered walk, as before
described, runs all round the interior of the wall, except on the
right-hand side, where the travellers' rooms look out upon the
garden ; but a portion of this walk only can be seen. The entrance
to the garden is by the concealed passage before described, nearly
under the travellers' rooms ; the small building to the right is the