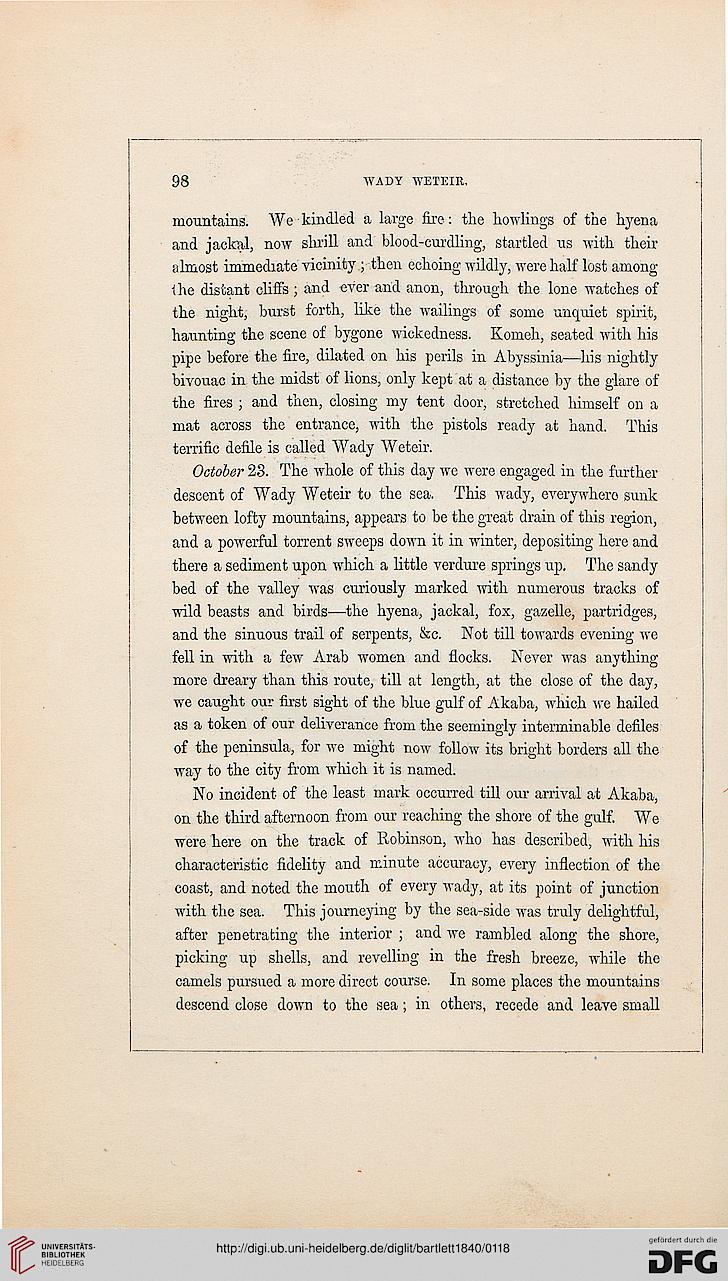 mountains. We kindled a large fire: the howlings of the hyena
and jackal, now shrill and blood-curdling, startled us with their
almost immediate vicinity ; then echoing wildly, were half lost among
the distant cliffs ; and ever and anon, through the lone watches of
the night, burst forth, like the wailings of some unquiet spirit,
haunting the scene of bygone wickedness. Komeh, seated with his
pipe before the fire, dilated on his perils in Abyssinia—his nightly
bivouac in the midst of lions, only kept at a distance by the glare of
the fires ; and then, closing my tent door, stretched himself on a
mat across the entrance, with the pistols ready at hand. This
terrific defile is called Wady Weteir.

October 23. The whole of this day we were engaged in the further
descent of Wady Weteir to the sea. This wady, everywhere sunk
between lofty mountains, appears to be the great drain of this region,
and a powerful torrent sweeps down it in winter, depositing here and
there a sediment upon which a little verdure springs up. The sandy
bed of the valley was curiously marked with numerous tracks of
wild beasts and birds—the hyena, jackal, fox, gazelle, partridges,
and the sinuous trail of serpents, &c. Not till towards evening we
fell in with a few Arab women and flocks. Never was anything
more dreary than this route, till at length, at the close of the day,
we caught our first sight of the blue gulf of Akaba, which we hailed
as a token of our deliverance from the seemingly interminable defiles
of the peninsula, for we might now follow its bright borders all the
way to the city from which it is named.

No incident of the least mark occurred till our arrival at Akaba,
on the third afternoon from our reaching the shore of the gulf. We
were here on the track of Robinson, who has described, with his
characteristic fidelity and minute accuracy, every inflection of the
coast, and noted the mouth of every wady, at its point of junction
with the sea. This journeying by the sea-side was truly delightful,
after penetrating the interior ; and we rambled along the shore,
picking up shells, and revelling in the fresh breeze, while the
camels pursued a more direct course. In some places the mountains
descend close down to the sea; in others, recede and leave small