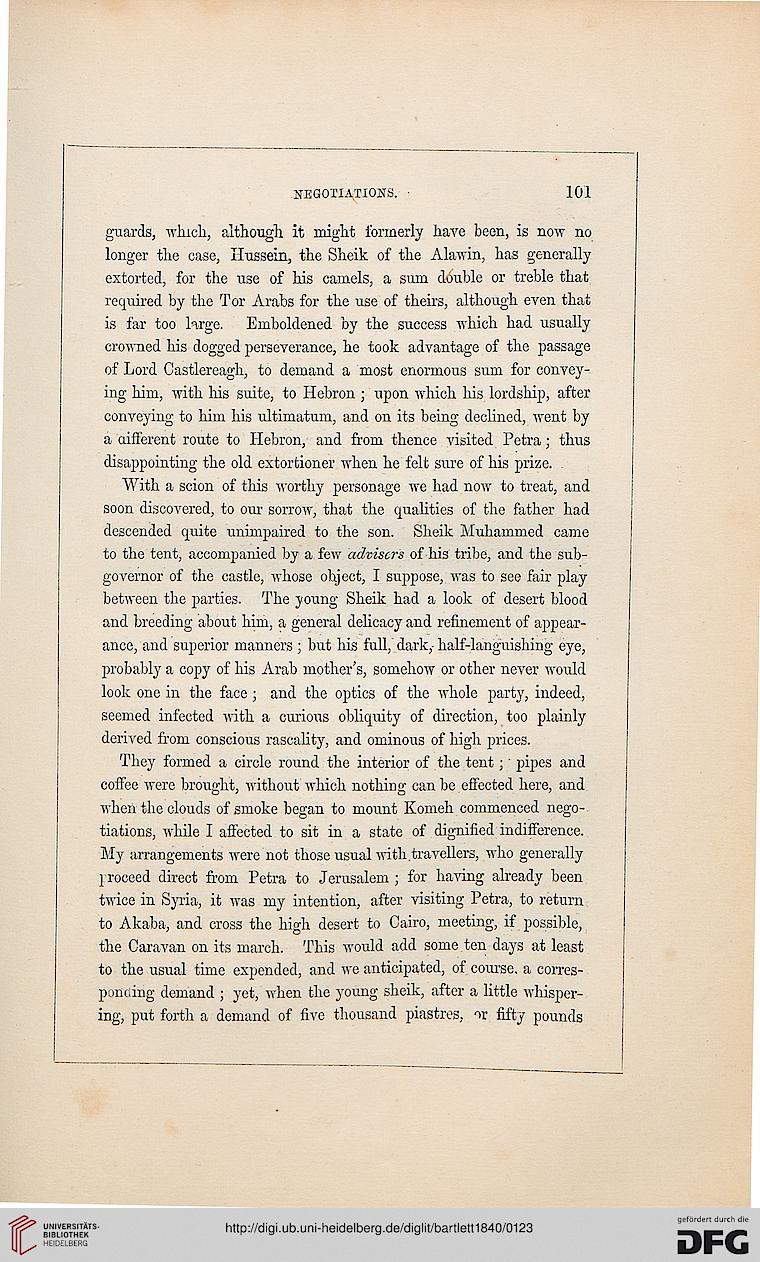 guards, which, although it might formerly haAre been, is now no
longer the case, Hussein, the Sheik of the Alawin, has generally
extorted, for the use of his camels, a sum double or treble that
required by the Tor Arabs for the use of theirs, although even that
is far too large. Emboldened by the success which had usually
crowned his dogged perseverance, he took advantage of the passage
of Lord Castlereagh, to demand a most enormous sum for convey-
ing him, with his suite, to Hebron ; upon which his lordship, after
conveying to him his ultimatum, and on its being declined, went by
a different route to Hebron, and from thence visited Petra; thus
disappointing the old extortioner when he felt sure of his prize.

With a scion of this worthy personage we had now to treat, and
soon discovered, to our sorrow, that the qualities of the father had
descended quite unimpaired to the son. Sheik Muhammed came
to the tent, accompanied by a few advisers of his tribe, and the sub-
governor of the castle, whose object, I suppose, was to see fair play
between the parties. The young Sheik had a look of desert blood
and breeding about him, a general delicacy and refinement of appear-
ance, and superior manners ; but his full, dark,- half-languishing eye,
probably a copy of his Arab mother's, somehow or other never would
look one in the face ; and the optics of the whole party, indeed,
seemed infected with a curious obliquity of direction, too plainly
derived from conscious rascality, and ominous of high prices.

They formed a circle round the interior of the tent; pipes and
coffee were brought, without which nothing can be effected here, and
when the clouds of smoke began to mount Komeh commenced nego-
tiations, while I affected to sit in a state of dignified indifference.
My arrangements were not those usual with.travellers, who generally
proceed direct from Petra to Jerusalem ; for having already been
twice in Syria, it was my intention, after visiting Petra, to return
to Akaba, and cross the high desert to Cairo, meeting, if possible,
the Caravan on its march. This would add some ten days at least
to the usual time expended, and we anticipated, of course, a corres-
ponding demand ; yet, when the young sheik, after a little whisper-
ing, put forth a demand of five thousand piastres, or fifty pounds