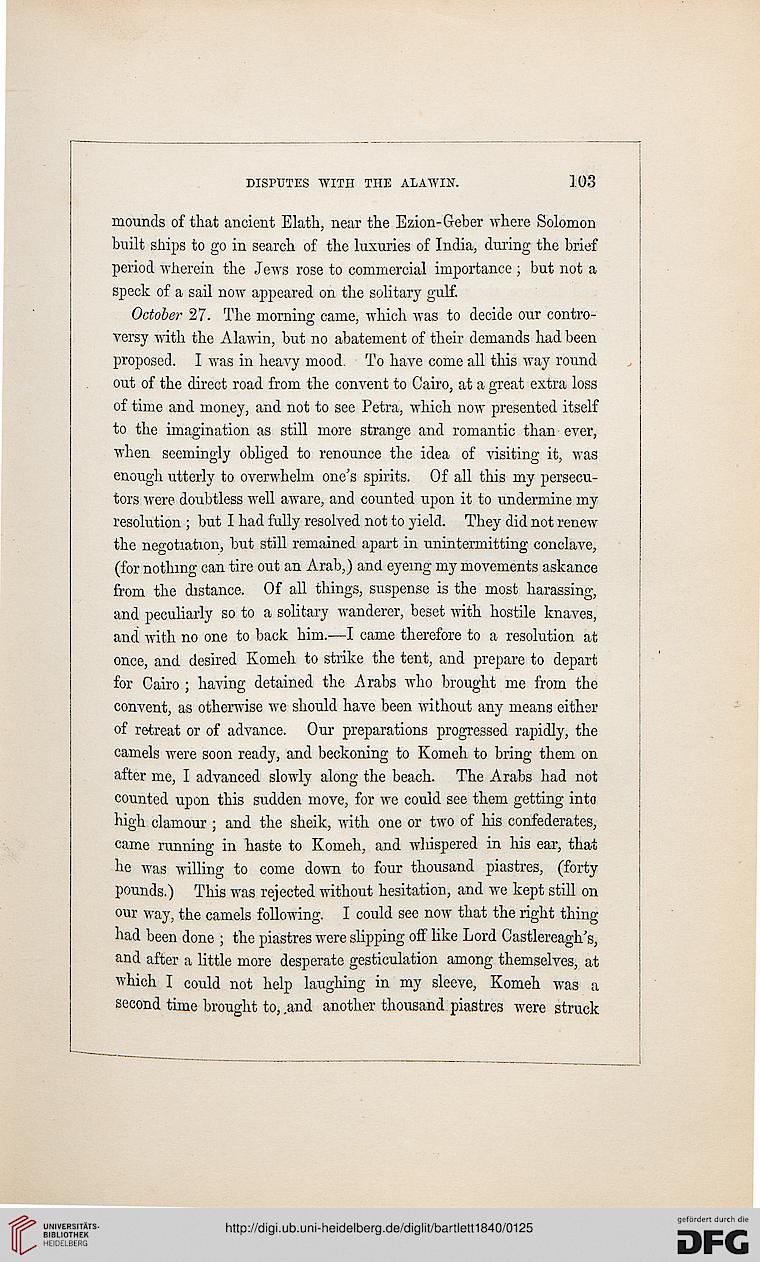 Information about OCR text
DISPUTES WITH THE ALAWIN. 103

mounds of that ancient Elath, near the Ezion-Geber where Solomon
built ships to go in search of the luxuries of India, during the brief
period wherein the Jews rose to commercial importance ; but not a
speck of a sail now appeared on the solitary gulf.

October 27. The morning came, which was to decide our contro-
versy with the Alawin, but no abatement of their demands had been
proposed. I was in heavy mood. To have come all this way round
out of the direct road from the convent to Cairo, at a great extra loss
of time and money, and not to see Petra, which now presented itself
to the imagination as still more strange and romantic than ever,
when seemingly obliged to renounce the idea of visiting it, was
enough utterly to overwhelm one's spirits. Of all this my persecu-
tors were doubtless well aware, and counted upon it to undermine my
resolution ; but I had fully resolved not to yield. They did not renew
the negotiation, but still remained apart in unintermitting conclave,
(for nothing can tire out an Arab,) and eyeing my movements askance
from the distance. Of all things, suspense is the most harassing,
and peculiarly so to a solitary wanderer, beset with hostile knaves,
and with no one to back him.—I came therefore to a resolution at
once, and desired Komeh to strike the tent, and prepare to depart
for Cairo ; having detained the Arabs who brought me from the
convent, as otherwise we should have been without any means either
of retreat or of advance. Our preparations progressed rapidly, the
camels were soon ready, and beckoning to Komeh to bring them on
after me, I advanced slowly along the beach. The Arabs had not
counted upon this sudden move, for we could see them getting into
high clamour ; and the sheik, with one or two of his confederates,
came running in "haste to Komeh, and wliispered in his ear, that
he was willing to come down to four thousand piastres, (forty
pounds.) This was rejected without hesitation, and we kept still on
our way, the camels following. I could see now that the right thing
had been done ; the piastres were slipping off like Lord Castlereagk's,
and after a little more desperate gesticulation among themselves, at
which I could not help laughing in my sleeve, Komeh was a
second time brought to, and another thousand piastres were struck