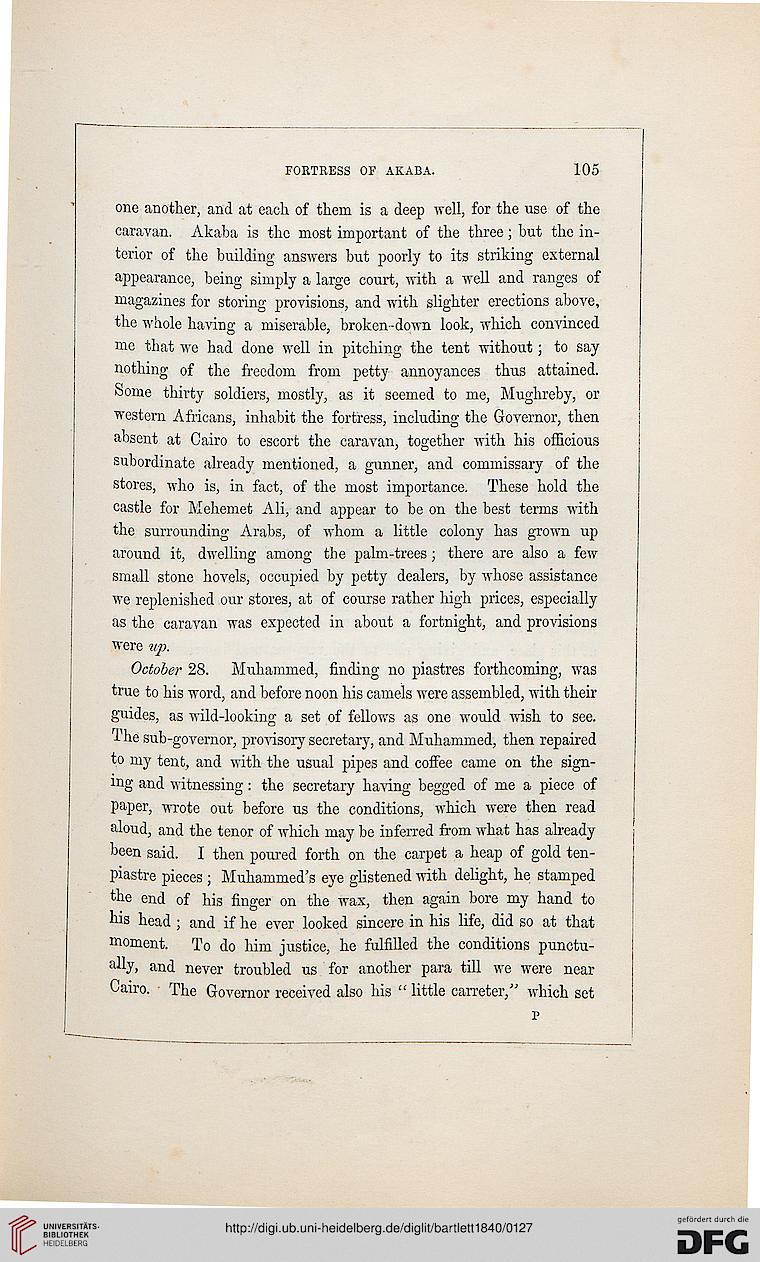 one another, and at each of them is a deep well, for the use of the
caravan. Akaba is the most important of the three; but the in-
terior of the building answers but poorly to its striking external
appearance, being simply a large court, with a well and ranges of
magazines for storing provisions, and with slighter erections above,
the whole having a miserable, broken-down look, which convinced
me that we had done well in pitching the tent without; to say
nothing of the freedom from petty annoyances thus attained.
Some thirty soldiers, mostly, as it seemed to me, Mughreby, or
western Africans, inhabit the fortress, including the Governor, then
absent at Cairo to escort the caravan, together with his officious
subordinate already mentioned, a gunner, and commissary of the
stores, who is, in fact, of the most importance. These hold the
castle for Mehemet Ali, and appear to be on the best terms with
the surrounding Arabs, of whom a little colony has grown up
around it, dwelling among the palm-trees ; there are also a few
small stone hovels, occupied by petty dealers, by whose assistance
we replenished our stores, at of course rather high prices, especially
as the caravan was expected in about a fortnight, and provisions
were up.

October 28. Muhammed, finding no piastres forthcoming, was
true to his word, and before noon his camels were assembled, with their
guides, as wild-looking a set of fellows as one would wish to see.
The sub-governor, provisory secretary, and Muhammed, then repaired
to my tent, and with the usual pipes and coffee came on the sign-
ing and witnessing: the secretary having begged of me a piece of
paper, wrote out before us the conditions, which were then read
aloud, and the tenor of which may be inferred from what has already
been said. I then poured forth on the carpet a heap of gold ten-
piastre pieces ; Muhammed's eye glistened with delight, he stamped
the end of his finger on the wax, then again bore my hand to
his head; and if he ever looked sincere in his life, did so at that
moment. To do him justice, he fulfilled the conditions punctu-
ally, and never troubled us for another para till we were near
Cairo. The Governor received also his " little carreter," which set