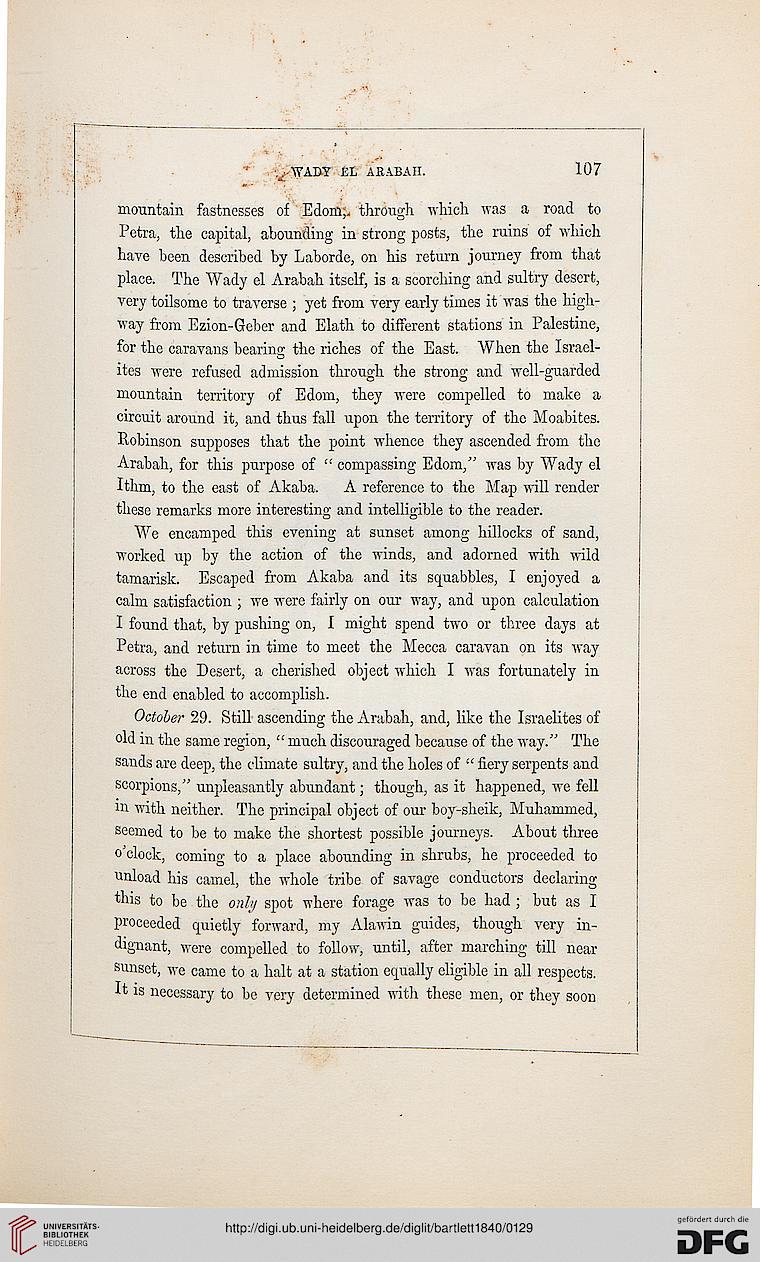 mountain fastnesses of Edoni;. through which was a road to
Petra, the capital, abounding in strong posts, the ruins of which
have been described by Laborde, on his return journey from that
place. The Wady el Arabah itself, is a scorching and sultry desert,
very toilsome to traverse ; yet from very early times it was the high-
way from Ezion-Geber and Elath to different stations in Palestine,
for the caravans bearing; the riches of the East. When the Israel-
ites were refused admission through the strong and well-guarded
mountain territory of Edom, they were compelled to make a
circuit around it, and thus fall upon the territory of the Moabites.
Robinson supposes that the point whence they ascended from the
Arabah, for this purpose of " compassing Edom," was by Wady el
Ithm, to the east of Akaba. A reference to the Map will render
these remarks more interesting and intelligible to the reader.

We encamped this evening at sunset among hillocks of sand,
worked up by the action of the winds, and adorned with wild
tamarisk. Escaped from Akaba and its squabbles, I enjoyed a
calm satisfaction ; we were fairly on our way, and upon calculation
I found that, by pushing on, I might spend two or three days at
Petra, and return in time to meet the Mecca caravan on its way
across the Desert, a cherished object which I was fortunately in
the end enabled to accomplish.

October 29. Still ascending the Arabah, and, like the Israelites of
old in the same region, " much discouraged because of the way." The
sands are deep, the climate sultry, and the holes of " fiery serpents and
scorpions," unpleasantly abundant; though, as it happened, we fell
m with neither. The principal object of our boy-sheik, Muhammed,
seemed to be to make the shortest possible journeys. About three
o'clock, coming to a place abounding in shrubs, he proceeded to
unload his camel, the whole tribe of savage conductors declaring
this to be the only spot where forage was to be had ; but as I
proceeded quietly forward, my Alawin guides, though very in-
dignant, were compelled to follow, until, after marching till near
sunset, we came to a halt at a station equally eligible in all respects.
It is necessary to be very determined with these men, or they soon