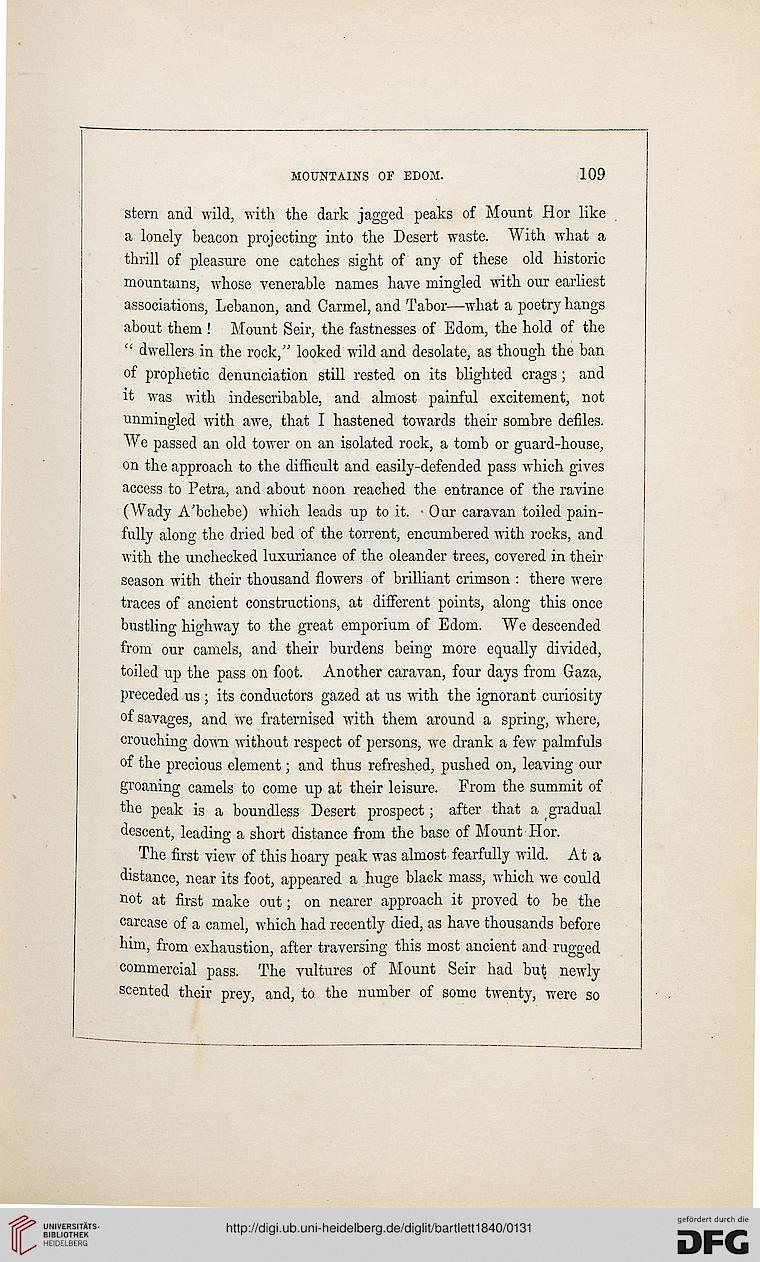 stern and wild, with the dark jagged peaks of Mount Hor like
a lonely beacon projecting into the Desert waste. "With what a
thrill of pleasure one catches sight of any of these old historic
mountains, whose venerable names have mingled with our earliest
associations, Lebanon, and Carmel, and Tabor—what a poetry hangs
about them ! Mount Seir, the fastnesses of Edom, the hold of the
" dwellers in the rock," looked wild and desolate, as though the ban
of prophetic denunciation still rested on its blighted crags; and
it was with indescribable, and almost painful excitement, not
unmingled with awe, that I hastened towards their sombre defiles.
We passed an old tower on an isolated rock, a tomb or guard-house,
on the approach to the difficult and easily-defended pass which gives
access to Petra, and about noon reached the entrance of the ravine
(Wady A'bchebe) which leads up to it. Our caravan toiled pain-
fully along the dried bed of the torrent, encumbered with rocks, and
with the unchecked luxuriance of the oleander trees, covered in their
season with their thousand flowers of brilliant crimson : there were
traces of ancient constructions, at different points, along this once
bustling highway to the great emporium of Edom. We descended
from our camels, and their burdens being more equally divided,
toiled up the pass on foot. Another caravan, four days from Gaza,
preceded us; its conductors gazed at us with the ignorant curiosity
of savages, and we fraternised with them around a spring, where,
crouching down without respect of persons, we drank a few palmfuls
of the precious element; and thus refreshed, pushed on, leaving our
groaning camels to come up at their leisure. From the summit of
the peak is a boundless Desert prospect; after that a gradual
descent, leading a short distance from the base of Mount Hor.

The first view of this hoary peak was almost fearfully wild. At a
distance, near its foot, appeared a huge black mass, which we could
not at first make out; on nearer approach it proved to be the
carcase of a camel, which had recently died, as have thousands before
him, from exhaustion, after traversing this most ancient and rugged
commercial pass. The vultures of Mount Seir had bu^ newly
scented their prey, and, to the number of some twenty, were so