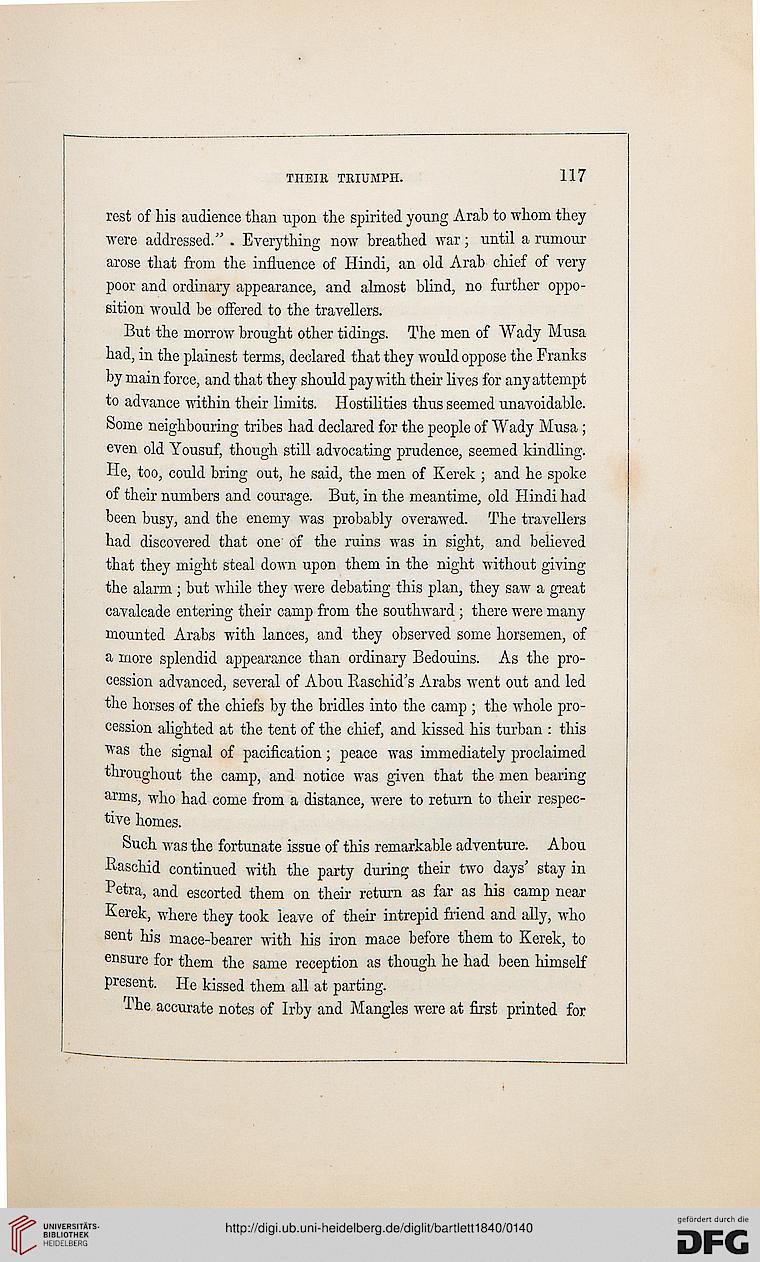 Information about OCR text
THEIR TRIUMPH. 117

rest of his audience than upon the spirited young Arab to whom they
were addressed." . Everything now breathed war; until a rumour
arose that from the influence of Hindi, an old Arab chief of very
poor and ordinary appearance, and almost blind, no further oppo-
sition would be offered to the travellers.

But the morrow brought other tidings. The men of Wady Musa
had, in the plainest terms, declared that they would oppose the Franks
by main force, and that they should pay with their lives for any attempt
to advance within their limits. Hostilities thus seemed unavoidable.
Some neighbouring tribes had declared for the people of Wady Musa;
even old Yousuf, though still advocating prudence, seemed kindling.
He, too, could bring out, he said, the men of Kerek ; and he spoke
of their numbers and courage. But, in the meantime, old Hindi had
been busy, and the enemy was probably overawed. The travellers
had discovered that one of the ruins was in sight, and believed
that they might steal down upon them in the night without giving
the alarm ; but while they were debating this plan, they saw a great
cavalcade entering their camp from the southward ; there were many
mounted Arabs with lances, and they observed some horsemen, of
a more splendid appearance than ordinary Bedouins. As the pro-
cession advanced, several of Abou Kaschid's Arabs went out and led
the horses of the chiefs by the bridles into the camp ; the whole pro-
cession alighted at the tent of the chief, and kissed his turban : this
Was the signal of pacification; peace was immediately proclaimed
throughout the camp, and notice was given that the men bearing
arms, who had come from a distance, were to return to their respec-
tive homes.

Such was the fortunate issue of this remarkable adventure. Abou
Raschid continued with the party during their two days' stay in
Petra, and escorted them on their return as far as his camp near
Kerek, where they took leave of their intrepid friend and ally, who
sent his mace-bearer with his iron mace before them to Kerek, to
ensure for them the same reception as though he had been himself
present. He kissed them all at parting.