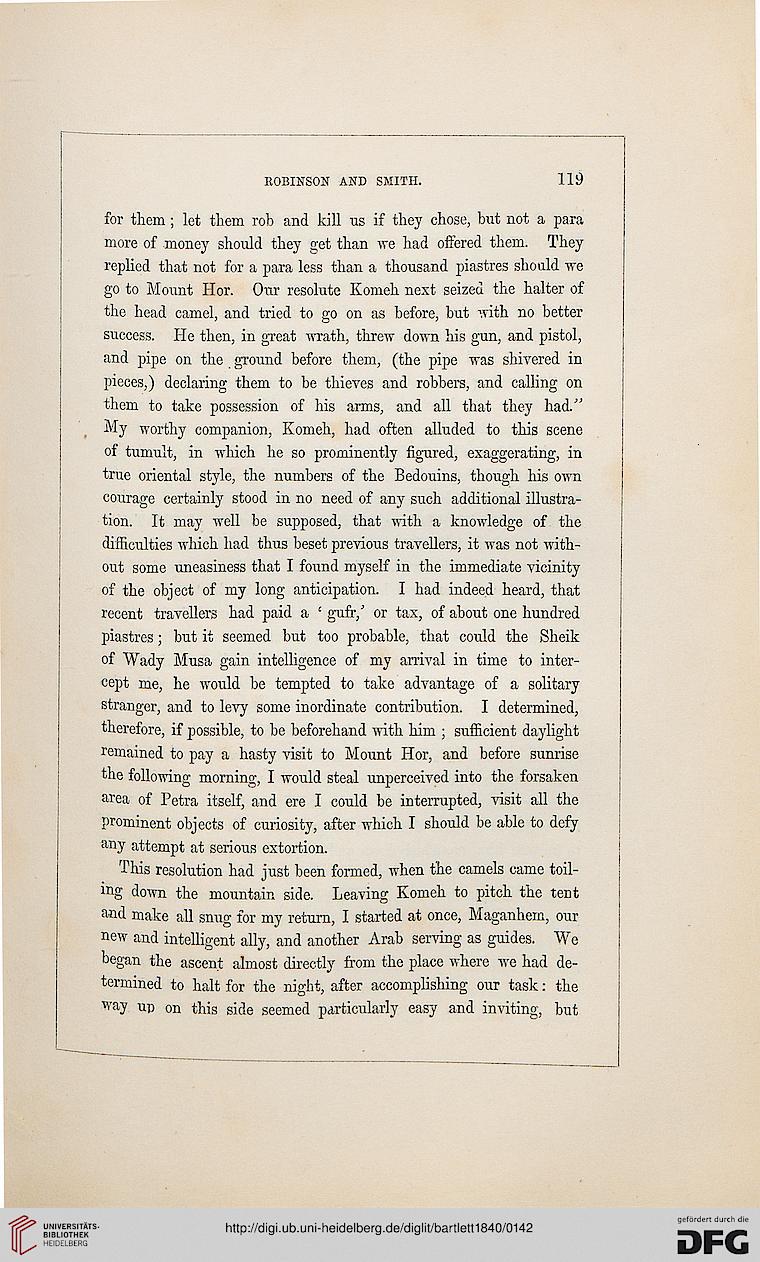 for them ; let them rob and kill us if they chose, but not a para
more of money should they get than we had offered them. They
replied that not for a para less than a thousand piastres should we
go to Mount Hor. Our resolute Komeh next seized the halter of
the head camel, and tried to go on as before, but with no better
success. He then, in great wrath, threw down his gun, and pistol,
and pipe on the ground before them, (the pipe was shivered in
pieces,) declaring them to be thieves and robbers, and calling on
them to take possession of his arms, and all that they had."
My worthy companion, Komeh, had often alluded to this scene
of tumult, in which he so prominently figured, exaggerating, in
true oriental style, the numbers of the Bedouins, though his own
courage certainly stood in no need of any such additional illustra-
tion. It may well be supposed, that with a knowledge of the
difficulties which had thus beset previous travellers, it was not with-
out some uneasiness that I found myself in the immediate vicinity
of the object of my long anticipation. I had indeed heard, that
recent travellers had paid a ' gufr/ or tax, of about one hundred
piastres; but it seemed but too probable, that could the Sheik
of Wady Musa gain intelligence of my arrival in time to inter-
cept me, he would be tempted to take advantage of a solitary
stranger, and to levy some inordinate contribution. I determined,
therefore, if possible, to be beforehand with him ; sufficient daylight
remained to pay a hasty visit to Mount Hor, and before sunrise
the following morning, I would steal unperceived into the forsaken
area of Petra itself, and ere I could be interrupted, visit all the
prominent objects of curiosity, after which I should be able to defy
any attempt at serious extortion.

This resolution had just been formed, when the camels came toil-
ing down the mountain side. Leaving Komeh to pitch the tent
and make all snug for my return, I started at once, Maganhem, our
new and intelligent ally, and another Arab serving as guides. "We
began the ascent almost directly from the place where Ave had de-
termined to halt for the night, after accomplishing our task: the
way un on this side seemed particularly easy and inviting, but