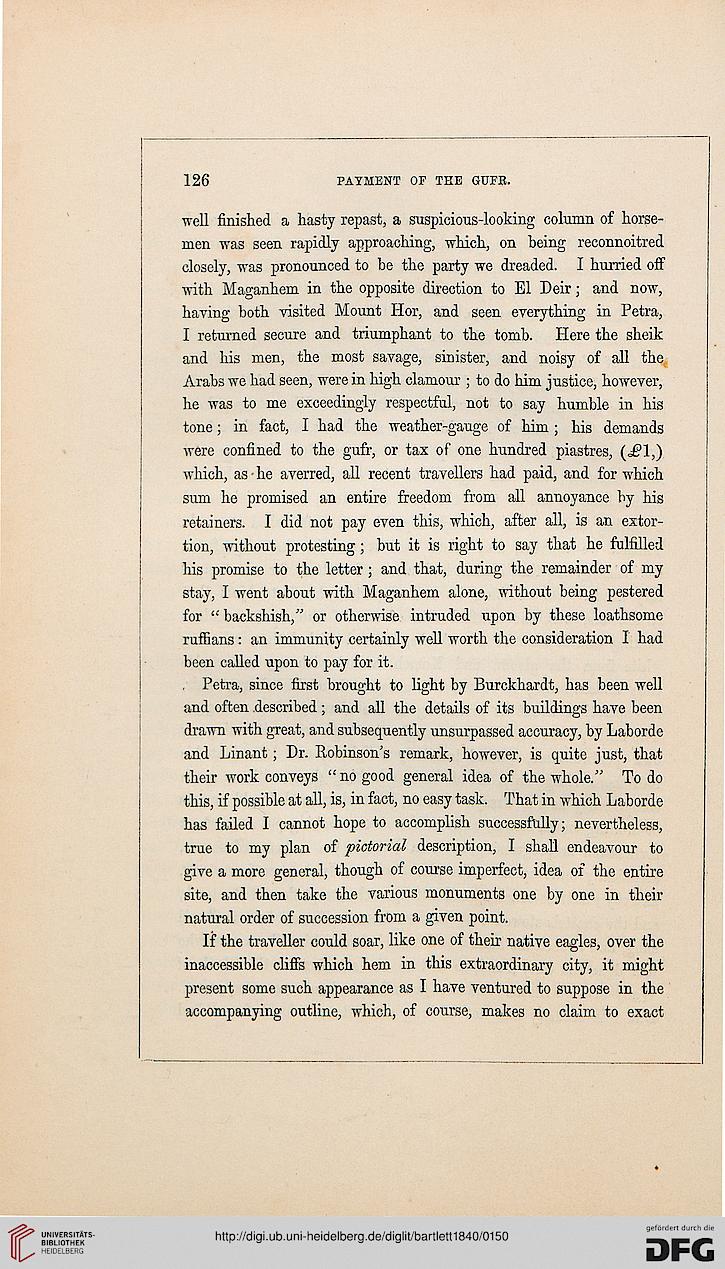 Information about OCR text
126 PAYMENT OF THE GUFR.

well finished a hasty repast, a suspicious-looking column of horse-
men was seen rapidly approaching, which, on being reconnoitred
closely, was pronounced to be the party we dreaded. I hurried off
with Maganhem in the opposite direction to El Deir; and now,
having both visited Mount Hor, and seen everything in Petra,
I returned secure and triumphant to the tomb. Here the sheik
and his men, the most savage, sinister, and noisy of all the
Arabs we had seen, were in high clamour ; to do him justice, however,
he was to me exceedingly respectful, not to say humble in his
tone; in fact, I had the weather-gauge of him; his demands
were confined to the gufr, or tax of one hundred piastres, (£1,)
which, as • he averred, all recent travellers had paid, and for which
sum he promised an entire freedom from all annoyance by his
retainers. I did not pay even this, which, after all, is an extor-
tion, without protesting; but it is right to say that he fulfilled
his promise to the letter; and that, during the remainder of my
stay, I went about with Maganhem alone, without being pestered
for " backshish," or otherwise intruded upon by these loathsome
ruffians : an immunity certainly well worth the consideration I had
been called upon to pay for it.

Petra, since first brought to light by Burckhardt, has been well
and often described ; and all the details of its buildings have been
drawn with great, and subsequently unsurpassed accuracy, by Laborde
and Linant; Dr. Robinson's remark, however, is quite just, that
their work conveys " no good general idea of the whole." To do
this, if possible at all, is, in fact, no easy task. That in which Laborde
has failed I cannot hope to accomplish successfully; nevertheless,
true to my plan of pictorial description, I shall endeavour to
give a more general, though of course imperfect, idea of the entire
site, and then take the various monuments one by one in their
natural order of succession from a given point.

If the traveller could soar, like one of their native eagles, over the
inaccessible cliffs which hem in this extraordinary city, it might
present some such appearance as I have ventured to suppose in the
accompanying outline, which, of course, makes no claim to exact