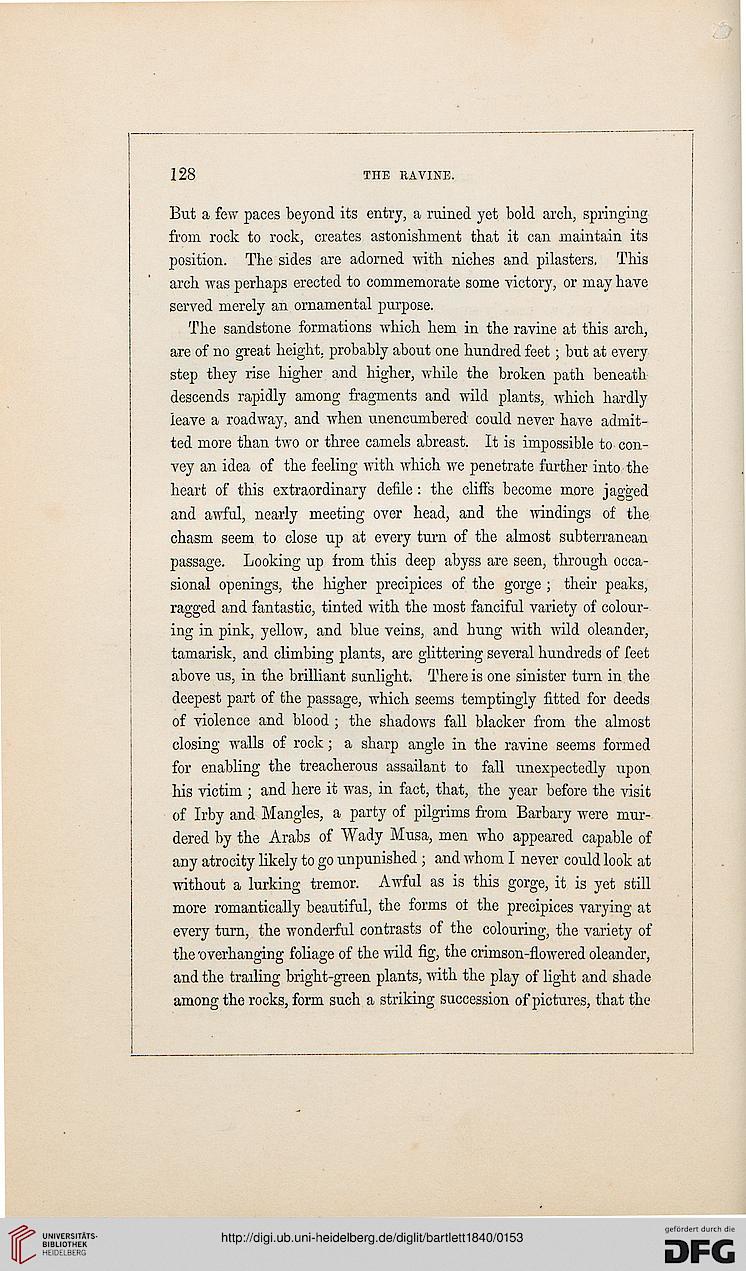 But a few paces beyond its entry, a ruined yet bold arch, springing
from rock to rock, creates astonishment that it can maintain its
position. The sides are adorned with niches and pilasters. This
arch was perhaps erected to commemorate some victory, or may have
served merely an ornamental purpose.

The sandstone formations which hem in the ravine at this arch,
are of no great height, probably about one hundred feet ; but at every
step they rise higher and higher, while the broken path beneath
descends rapidly among fragments and wild plants, which hardly
leave a roadway, and when unencumbered could never have admit-
ted more than two or three camels abreast. It is impossible to con-
vey an idea of the feeling with which we penetrate further into the
heart of this extraordinary defile : the cliffs become more jarwed
and awful, nearly meeting over head, and the windings of the
chasm seem to close up at every turn of the almost subterranean
passage. Looking up from this deep abyss are seen, through occa-
sional openings, the higher precipices of the gorge ; their peaks,
ragged and fantastic, tinted with the most fanciful variety of colour-
ing in pink, yellow, and blue veins, and hung with wild oleander,
tamarisk, and climbing plants, are glittering several hundreds of feet
above us, in the brilliant sunlight. There is one sinister turn in the
deepest part of the passage, which seems temptingly fitted for deeds
of violence and blood ; the shadows fall blacker from the almost
closing walls of rock; a sharp angle in the ravine seems formed
for enabling the treacherous assailant to fall unexpectedly upon
his victim ; and here it was, in fact, that, the year before the visit
of Irby and Mangles, a party of pilgrims from Barbary were mur-
dered by the Arabs of Wady Musa, men who appeared capable of
any atrocity likely to go unpunished ; and whom I never could look at
without a lurking tremor. Awful as is this gorge, it is yet still
more romantically beautiful, the forms ot the precipices varying at
every turn, the wonderful contrasts of the colouring, the variety of
the 'overhanging foliage of the wild fig, the crimson-flowered oleander,
and the trailing bright-green plants, with the play of light and shade
among the rocks, form such a striking succession of pictures, that the