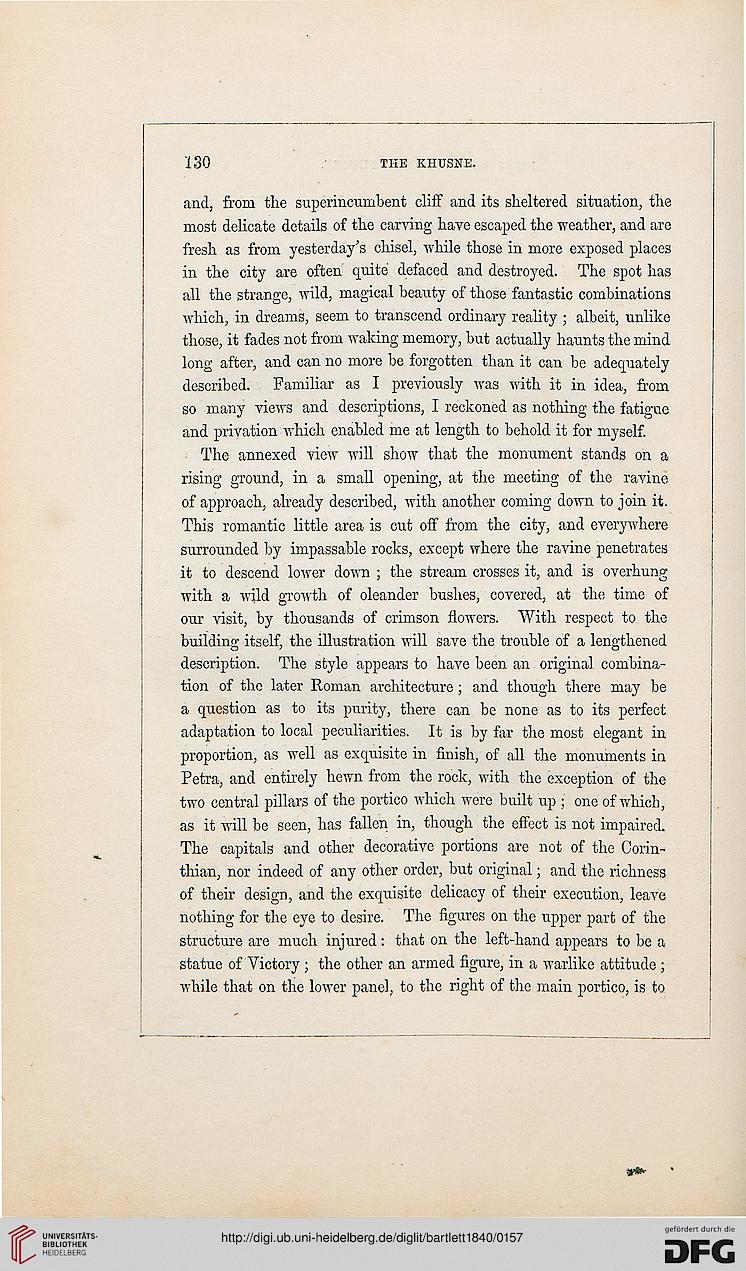 Information about OCR text
130 THE KHUSNE.

and, from the superincumbent cliff and its sheltered situation, the
most delicate details of the carving have escaped the weather, and are
fresh as from yesterday's chisel, while those in more exposed places
in the city are often quite defaced and destroyed. The spot has
all the strange, wild, magical beauty of those fantastic combinations
which, in dreams, seem to transcend ordinary reality ; albeit, unlike
those, it fades not from waking memory, but actually haunts the mind
long after, and can no more be forgotten than it can be adequately
described. Familiar as I previously was with it in idea, from
so many views and descriptions, I reckoned as nothing the fatigue
and privation which enabled me at length to behold it for myself.

The annexed view will show that the monument stands on a
rising ground, in a small opening, at the meeting of the ravine
of approach, already described, with another coming down to join it.
This romantic little area is cut off from the city, and everywhere
surrounded by impassable rocks, except where the ravine penetrates
it to descend lower down ; the stream crosses it, and is overhung
with a wild growth of oleander bushes, covered, at the time of
our visit, by thousands of crimson flowers. With respect to the
building itself, the illustration will save the trouble of a lengthened
description. The style appears to have been an original combina-
tion of the later Roman architecture; and though there may be
a question as to its purity, there can be none as to its perfect
adaptation to local peculiarities. It is by far the most elegant in
proportion, as well as exquisite in finish, of all the monuments in
Petra, and entirely hewn from the rock, with the exception of the
two central pillars of the portico which were built up ; one of which,
as it will be seen, has fallen in, though the effect is not impaired.
The capitals and other decorative portions are not of the Corin-
thian, nor indeed of any other order, but original; and the richness
of their design, and the exquisite delicacy of their execution, leave
nothing for the eye to desire. The figures on the upper part of the
structure are much injured: that on the left-hand appears to be a
statue of Victory ; the other an armed figure, in a warlike attitude;
while that on the lower panel, to the right of the main portico, is to