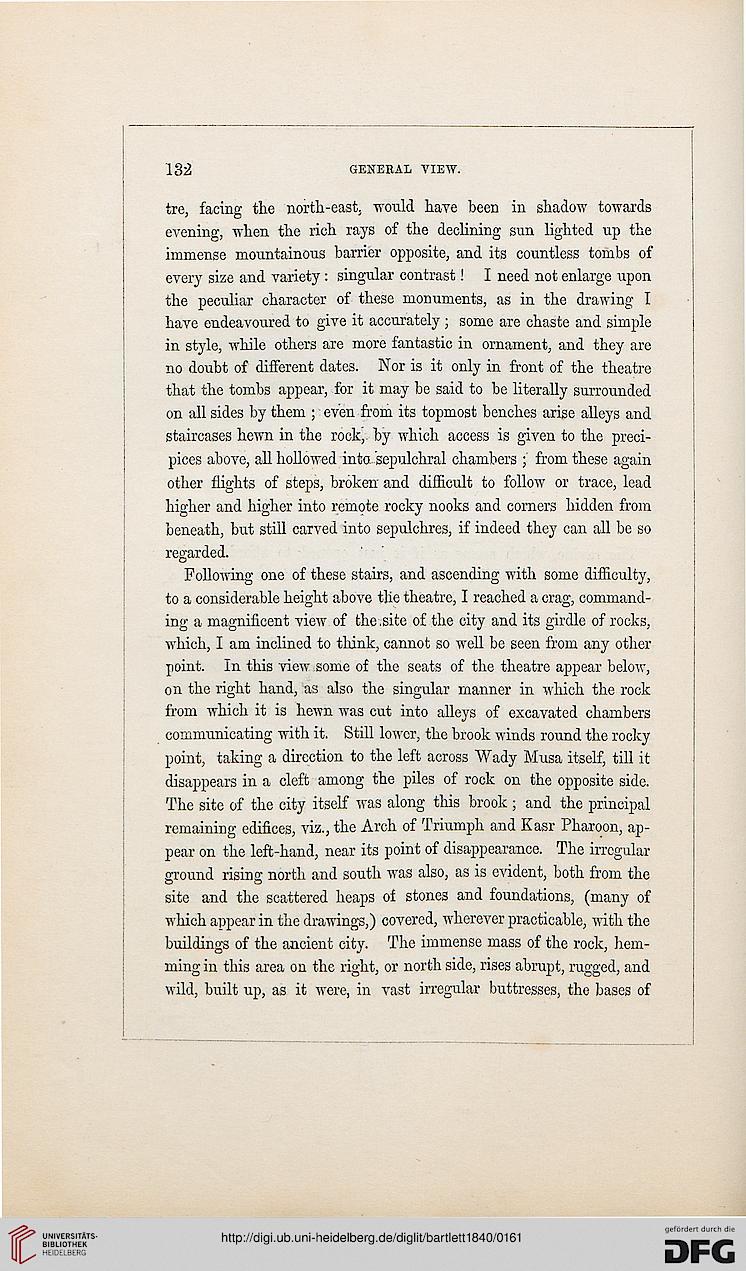 tre, facing the north-east, would have been in shadow towards
evening, when the rich rays of the declining sun lighted up the
immense mountainous barrier opposite, and its countless tombs of
every size and variety : singular contrast! I need not enlarge upon
the peculiar character of these monuments, as in the drawing I
have endeavoured to give it accurately ; some are chaste and simple
in style, while others are more fantastic in ornament, and they are
no doubt of different dates. Nor is it only in front of the theatre
that the tombs appear, for it may be said to be literally surrounded
on all sides by them ; even from its topmost benches arise alleys and
staircases hewn in the rock,, by which access is given to the preci-
pices above, all hollowed into sepulchral chambers ; from these again
other flights of steps, broken and difficult to follow or trace, lead
higher and higher into remote rocky nooks and corners hidden from
beneath, but still carved into sepulchres, if indeed they can all be so
regarded.

Following one of these stairs, and ascending with some difficulty,
to a considerable height above tlie theatre, I reached a crag, command-
ing a magnificent view of the .site of the city and its girdle of rocks,
which, I am inclined to think, cannot so well be seen from any other
point. In this view some of the seats of the theatre appear below,
on the right hand, as also the singular manner in which the rock
from which it is hewn was cut into alleys of excavated chambers
communicating with it. Still lower, the brook winds round the rocky
point, taking a direction to the left across Wady Musa itself, till it
disappears in a cleft among the piles of rock on the opposite side.
The site of the city itself was along this brook ; and the principal
remaining edifices, viz., the Arch of Triumph and Kasr Pharoon, ap-
pear on the left-hand, near its point of disappearance. The irregular
ground rising north and south was also, as is evident, both from the
site and the scattered heaps of stones and foundations, (many of
which appear in the drawings,) covered, wherever practicable, with the
buildings of the ancient city. The immense mass of the rock, hem-
ming in this area on the right, or north side, rises abrupt, rugged, and
wild, built up, as it were, in vast irregular buttresses, the bases of