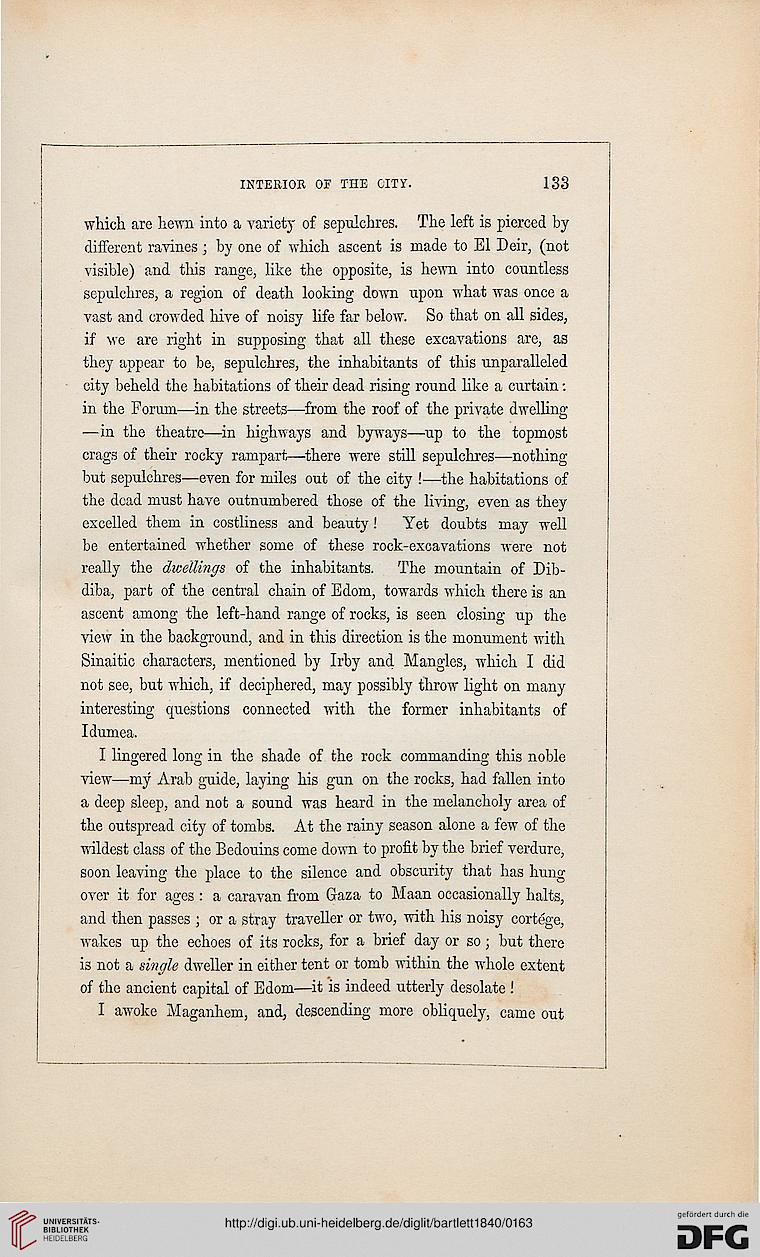 Information about OCR text
INTERIOR OF THE CITY.

which are hewn into a variety of sepulchres. The left is pierced by
different ravines ; by one of which ascent is made to El Deir, (not
visible) and this range, like the opposite, is hewn into countless
sepulchres, a region of death looking down upon what was once a
vast and crowded hive of noisy life far below. So that on all sides,
if we are right in supposing that all these excavations are, as
they appear to be, sepulchres, the inhabitants of this unparalleled
city beheld the habitations of their dead rising round like a curtain:
in the Forum—in the streets—from the roof of the private dwelling
—in the theatre—in highways and byways—up to the topmost
crags of their rocky rampart—there were still sepulchres—nothing
but sepulchres—even for miles out of the city !—the habitations of
the dead must have outnumbered those of the living, even as they
excelled them in costliness and beauty! Yet doubts may well
be entertained whether some of these rock-excavations were not
really the dwellings of the inhabitants. The mountain of Dib-
diba, part of the central chain of Edom, towards which there is an
ascent among the left-hand range of rocks, is seen closing up the
view in the background, and in this direction is the monument with
Sinaitic characters, mentioned by Irby and Mangles, which I did
not see, but which, if deciphered, may possibly throw light on many
interesting questions connected with the former inhabitants of
Idumea.

I lingered long in the shade of the rock commanding this noble
view—my Arab guide, laying his gun on the rocks, had fallen into
a deep sleep, and not a sound was heard in the melancholy area of
the outspread city of tombs. At the rainy season alone a few of the
wildest class of the Bedouins come down to profit by the brief verdure,
soon leaving the place to the silence and obscurity that has hung
over it for ages : a caravan from Gaza to Maan occasionally halts,
and then passes ; or a stray traveller or two, with his noisy cortege,
wakes up the echoes of its rocks, for a brief day or so; but there
is not a single dweller in either tent or tomb within the whole extent
of the ancient capital of Edom—it is indeed utterly desolate !

I awoke Maganhem, and, descending more obliquely, came out